500 years later, Our Lady of Guadalupe still consoles millions with her message: God has not forgotten us 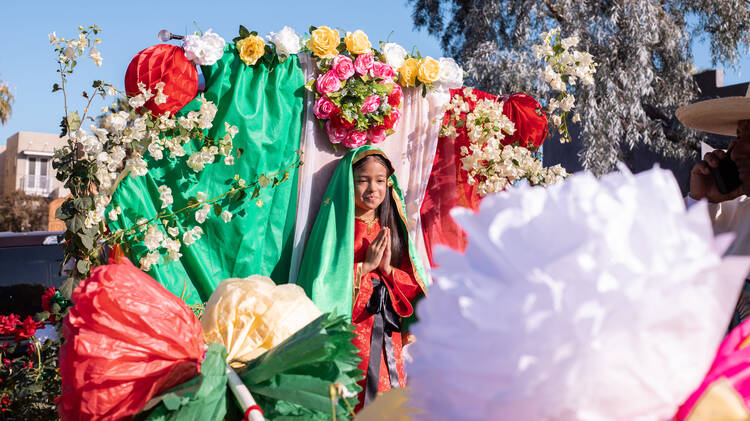 A young girl plays the role of Our Lady of Guadalupe during the Honor Your Mother Festival and parade in Phoenix, 2021. (Photo by Keara Hanlon)

Many readers may more readily recognize her European counterparts, Lourdes and Fatima, but she appeared almost 500 years ago in what is now Mexico. She is known by many names: Nuestra Señora de Guadalupe, La Virgen de Guadalupe, Empress of the Americas, Our Lady of Tepeyac and, most commonly in the United States, Our Lady of Guadalupe.

She is the brown-skinned virgin mother who evangelized millions, especially in Latin America and the United States. In her revered image, she stands in front of the sun and atop a crescent moon, wearing a star-covered robe, a band around her stomach revealing that she is about to give birth. As Christmas delivers its message that Christ is born, her consoling message remains: God has not forgotten you.

Catholics, non-Catholics and even non-believers have found comfort in her, even when she is not on an altar or a church but emblazoned on a pair of dangling earrings or on a muscular forearm.

Her apparition story has been told as one of salvation for the Indigenous peoples of the Americas, their descendants and a suffering world. Catholics, non-Catholics and even non-believers have found comfort in her, even when she is not on an altar or a church but emblazoned on a pair of dangling earrings or on a muscular forearm.

She is paid tribute year-round but most notably over two feast days. The first, on Dec. 9, honors the Catholic convert St. Juan Diego, who reported her apparitions in 1531 on a hill called Tepeyac in the capital of the Aztec empire, Tenochtitlán, in present-day Mexico City. In a miraculous sign, her image appeared on Juan Diego’s tilma, a piece of fragile fabric, which he carried to the local bishop to prove her apparitions. Devotees believe Juan Diego’s tilma and the one in the Mexico City basilica built in Our Lady of Guadalupe’s honor are one and the same.

[Related: Guadalupe’s Legacy: How a 486-year-old vision of Mary in Mexico continues to influence the church]

Three days later, on Dec. 12, Catholics mark her feast day at Mass. They honor her in pilgrimages and serenatas, most notably one carried live on Spanish-language television from the basilica.

Throughout the Southwest—where many Mexican Americans and other Latinos live—worshipers show their devotion in other ways, even during a coronavirus pandemic that is now stretching into its second year. They visit shrines and chapels and leave written petitions and photos near Our Lady’s portraits and statues. Matachines, or spiritual dancers, dressed in colorful attire representing their parishes or Mexican states, venerate her in public observances, which are mostly now outdoors and under health protocols. In San Antonio, members of Our Lady of Guadalupe parish lead a 17-mile pilgrimage to a church of the same name in a nearby suburb.

Catholics who have left the church have managed to take Our Lady with them into other faith traditions or merely in their homes. In the secular world, she has become ubiquitous, appropriated by popular culture and placed on clothing, home furnishings and outdoor murals. She was celebrated by the U.S. Chicano civil rights movement in the 1960s and ’70s, and she has been seen more recently in immigrant rights and Black Lives Matter marches.

She was celebrated by the U.S. Chicano civil rights movement in the 1960s and ’70s, and she has been seen more recently in immigrant rights and Black Lives Matter marches.

Her story may not be well-known in places without Mexican-American communities, but to so many, her utterances to Juan Diego are retold as history. Those words only begin to examine her complex role and what a faithful man like Juan Diego might have seen in his lifetime—as people were dying at the hands of Spanish conquistadors or suffered slower deaths to diseases introduced by the Spanish.

“Nothing should frighten or grieve you,” Our Lady said to Juan Diego, as documented in a 16th-century account written in the Nahuatl language. “Am I not here, I, who am your Mother?”

Centuries later, the words of Nobel Prize-winning writer Octavio Paz vividly explored her lasting influence: “After two centuries of experiment and failure, the Mexican people only believe in the Virgin of Guadalupe and the national lottery.”

“After two centuries of experiment and failure, the Mexican people only believe in the Virgin of Guadalupe and the national lottery.”

The Rev. David Garcia, a retired San Antonio priest of almost 47 years, described her as “omnipresent” in the Mexican American parishes in which he ministered.

“For the working poor and the elderly poor,” he said, “her images are everywhere”—in outdoor garden capillas (miniature grottos), on refrigerator doors and on calendars distributed by panaderias, makers of Mexican pastries. In the homes of art collectors, she is on canvases ranging from the traditional to the avant-garde.

Father Garcia, known for his role in the restoration of the San Fernando Cathedral in downtown San Antonio (as well as for raising funds to maintain the city’s four historic Spanish-Indigenous missions), tells the story of a small area behind the cathedral’s altar—a focal point after the restoration—to illustrate the unshakeable devotion to Our Lady of Guadalupe. The area features a large-scale image of the lady painted in 1750 and framed by a golden altarpiece called a retablo.

“As soon as we opened that back area, people swarmed there after Mass to be with her,” Father Garcia said. “It instantly became this wonderful, intimate prayer spot where they could interact with her.”

[Related: Our Lady of Guadalupe is the subject of a new film. It’s...predictable.]

Members of parish societies largely made up of women, called Guadalupanas, have stories of her intercessions after Our Lady of Guadalupe was asked for ayuda (aid) or apoyo (support). They speak of lives brought back from the brink of death and from the depths of despair. They talk about little signs left by her—a rose petal found on their path, or the scent of the flower tied to the apparition story. They talk of miracles, great and small.

Rosa Elia Rosas, who served as president of the Guadalupanas at San Fernando Cathedral for two years, liked telling Guadalupe’s story to children in catechism classes. They loved the presentations, she said, and were taught that they, too, can go before the Lady with their prayers.

After her own parents died and her sister became seriously ill, Ms. Rosas said that she “put her in Guadalupe’s hands.” Choking up, she added: “She’s still with us. She’s blind and is on dialysis but still with us.”

There are so many other saints, she said, “but our Virgen de Guadalupe is of the Americas. She is always there for us and willing to listen.”

Ms. Rosas recalled one boy with lots of questions in catechism class. “Remember you told me to pray to that lady?” she recalls the boy saying. “I prayed for my daddy to come home.”

He was in prison but came home in time for the holidays that year. 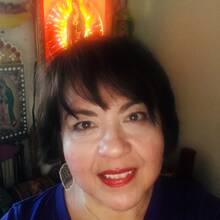 Elaine Ayala is a journalist based in San Antonio, Texas.