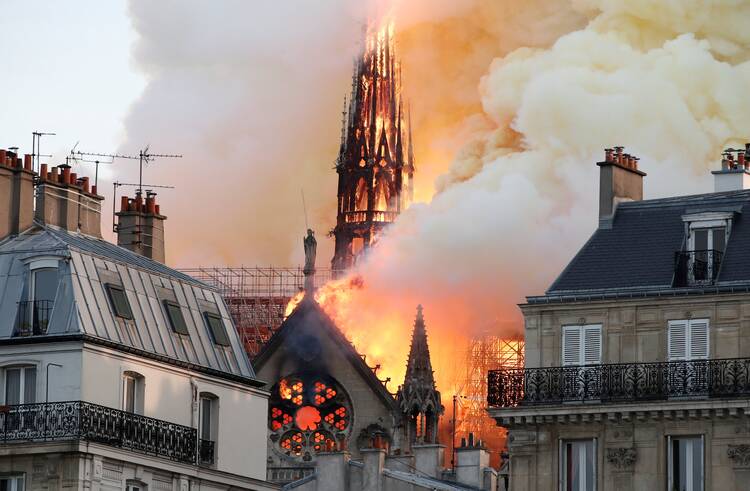 Flames and smoke billow from the Notre-Dame Cathedral after a fire broke out in Paris on April 15, 2019.

It was a sunny Marathon Monday in Boston in 2019 when I got a notification on my phone that the Cathedral of Notre-Dame de Paris was on fire. I watched a live video feed as flames engulfed the lead-and-wood roof of the church. As Notre-Dame’s ornate spire collapsed, I felt a sadness that must have been similar to how people reacted as they watched the Twin Towers collapse in New York in 2001, even if for different reasons.

I believe that the cathedral should stay as it was. Notre-Dame, in all of its Gothic magnificence, serves as a vital reminder of God’s grandeur.

More than two years later, the teams working on Notre-Dame’s rehabilitation have come up with new plans for its interior. The proposed redesign hardly alters the cathedral’s existing structure, but it does envision a so-called discovery trail around the church to help visitors learn the story of the Bible, as well as spaces for meditation and digital projections of Bible verses in different languages. The tentative plans—shared by the London-based paper The Telegraph on Nov. 26—have caused an uproar among tradition-minded pundits. (The details are scheduled to be revealed publicly on Dec. 9, when the National Heritage and Architecture Commission will begin reviewing them.)

The proposed changes to Notre-Dame would not make the cathedral into a “theme park” or “woke Disneyland,” as certain commentators on both sides of the Atlantic would have indignant readers believe. The restoration designers—led by a Catholic priest, the Rev. Gille Drouin—are evidently striving to reach out to nonbelievers from around the world and to educate Christians about their own faith.

All the same, I do agree that the cathedral should stay as it was. Notre-Dame, in all of its Gothic magnificence, serves as a vital reminder of God’s grandeur. I understand where the cathedral’s redesigners are coming from, and I would not dismiss any modern innovation out of hand, but there are better avenues for them to pursue the work of evangelization they are trying to do.

Ultimately, the controversy over the proposed redesign of Notre-Dame reflects a debate about how we approach God. Do we see him as a philosophical wonder, a mystery, praiseworthy above all else? Or do we seek the more personal and active God we meet in Jesus?

[Related: What we lost when Notre-Dame de Paris caught fire]

Although Christianity is founded on belief in the Trinity, there are a number of dualities in our faith: Jesus was both human and divine; the contents of our faith are found in both Scripture and tradition; the Eucharist comes to us in the form of bread and wine. There is also a binary of how we conceptualize God: The Lord is the unfathomable and infinite creator of the universe, but he is also the poor man from Roman-occupied Palestine who showed mercy toward sinners and healed the sick as he wandered around Galilee.

In our time, the church has emphasized this pastoral view of God embodied in Jesus—and rightly so. In the centuries before the Second Vatican Council, the institutional church had gradually separated from the community of believers, leaving some with a more abstract understanding of their faith; for many, ritual and dogma were given pride of place over a personal relationship between themselves and God. The reforms of the council can be said to have renewed the church, reminding Christians that God is close to each of us in an intensely personal way.

The proposed changes run the risk of making a timeless monument to God’s majesty into something much more pedestrian.

Vatican II might seem worlds away from discussion of a 13th-century cathedral, but the way in which the council reframed our conception of how God relates to humankind speaks to the current controversy.

While I am sympathetic to the intentions of the team working to redesign the cathedral, I am skeptical that the proposed alterations will ultimately make a substantial difference in evangelizing people from around the world. The additions may push a handful of visitors each day to reconsider the Christian faith (or to consider it for the first time), but did the splendid architecture and reverent atmosphere of the cathedral before the fire fail in this regard? And isn’t the worldwide synod that the church is currently undergoing a better (and less expensive) tool to reach out to such groups on the margins of the church in a deeper way?

[Related: Grieving the fire of Notre Dame during Holy Week]

Unfortunately, like many parish churches built in the 1970s and ’80s, the Notre-Dame redesign seems to take its inspiration from sensibilities unique to our own decades, rather than drawing on time-tested understandings of God, which are as old as humanity itself. The proposed changes run the risk of making a timeless monument to God’s majesty into something much more pedestrian.

Because of our human imperfection and limitations, no cathedral can ever capture the myriad of facets of God’s divinity. But Notre-Dame in its pre-2019 iteration did a more than adequate job of expressing the transcendent nature of God, and that was enough. The cathedral’s soaring turrets, vaulted ceilings and pointed arches cause us to look up toward the heavens, spiritually no less than literally.

Like many other intellectual and aesthetic products of medieval times, Notre-Dame continues to remind Catholics of how small we are next to God in all his immensity, majesty and splendor. Just because we have opened our field of view to include the Son Incarnate does not mean that we should lose sight of the Father Almighty.