Archbishop Roche: Vatican II’s reform of the Mass is ‘irreversible’ 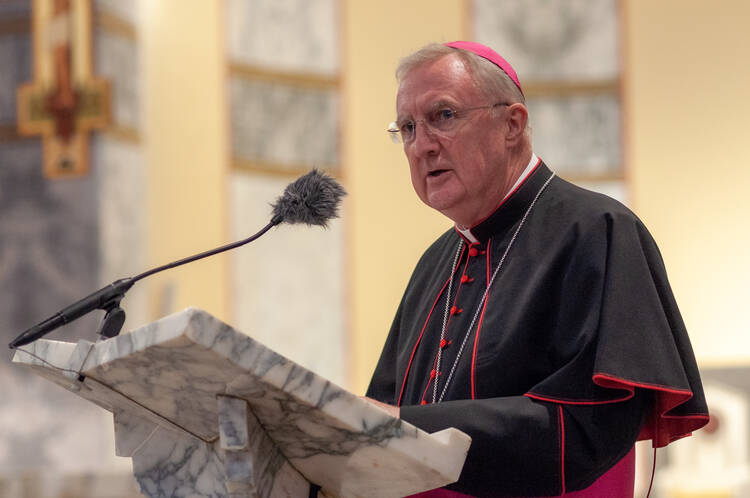 In his first public lecture as prefect of the Congregation for Divine Worship and the Discipline of the Sacraments, Archbishop Arthur Roche left no doubt as to the direction the congregation will take under his leadership. He did so by quoting Pope Francis’ words, referring to the reform of the liturgy approved by the Second Vatican Council: “We can affirm with certainty and with magisterial authority that the liturgical reform is irreversible.”

The English-born archbishop, whom Pope Francis appointed to succeed Cardinal Robert Sarah as prefect of this congregation on May 27, was invited to give the inaugural address to staff and students for the opening of the academic year at the Pontifical Atheneum of St. Anselm in Rome. The university is run by the Benedictines and includes a liturgical institute that provides formation in the liturgy to members of religious orders, clergy and laypeople.

He began his lecture by telling the staff and students that he spoke not only as prefect of the Vatican congregation but also from 46 years experience as a priest, 20 as a bishop (10 as a diocesan bishop, almost 10 as secretary of the congregation) and as a Catholic who “straddled the pre- and post-Vatican II eras.”

Archbishop Arthur Roche: “We can affirm with certainty and with magisterial authority that the liturgical reform is irreversible.”

His emphasis on the need for “prepared and balanced” people who think with the church reflected the concern of many bishops that not infrequently today, new priests lack “preparation and balance” in liturgical matters or succumb to “ecclesiastical ideologies” or simply go their own way in terms of their vision of church and liturgical practice. Such concerns were also part of the background that gave rise to Pope Francis’ July 16 decree, “Traditionis Custodes,”restricting celebration of the pre-Vatican II, Tridentine Latin Mass.

Archbishop Roche urged the students to pay attention to the “long and fascinating history of the liturgical movement” prior to Vatican II and to the choices made by the council fathers regarding the liturgy as well as the reasons for those choices.

He reminded them that Pope Francis, in his address to participants at the 68th Italian National Liturgical week in August 2017, recalled that St. Paul VI told cardinals in a consistory one year before his death, “The time has now come to definitively leave aside divisive elements, which are equally pernicious in both senses, and to apply fully, in accordance with the correct criteria that inspired it, the reform approved by us in the application of the wishes of the council.”

Pope Francis then added, “There is still work to be done in this direction, in particular by rediscovering the reasons for the decisions taken with regard to the liturgical reform, by overcoming unfounded and superficial readings, a partial reception and practices that disfigure it.”

“After this magisterium, after this long journey, we can affirm with certainty and with magisterial authority that the liturgical reform is irreversible,” the pope concluded.

Archbishop Roche called on the staff and students at St. Anselm to be “faithful disciples who build up the church and are not the cause of its fragmentation.”

In his lecture, Archbishop Roche called on the staff and students at St. Anselm to “be men and women, scholars and masters of your various scientific endeavors, yes, but above all faithful disciples who build up the church and are not the cause of its fragmentation.”

He encouraged them to deepen their spiritual life through their liturgical studies and confided that his own faith life had been greatly enriched through his 20-year involvement with the translations of the Roman Missal approved by Pope Paul VI. He revealed that through this work he came to appreciate more than ever before that “these prayers, these texts, were not simply the creation of a fine mind or a single pen but came from God’s own hand through the rich biblical and patristic patrimony that we find there, together with the profound teaching of the church’s understanding of herself as found in the dogmatic constitution ‘Lumen Gentium.’”

“This patrimony connects us with the church’s faith as expressed throughout the ages and which is pertinent for our time and mission,” the archbishop said.

“The Roman Missal of Pope St. Paul VI is the richest Missal that the church has ever produced together with its Missale Romanum Lectionarium,” Archbishop Roche told his audience. Moreover, he said, “it can rightly be said that the vision contained not only in the Constitution on the Sacred Liturgy, ‘Sacrosanctum Concilium,’ but also in the Dogmatic Constitution on Divine Revelation, “Dei Verbum,” has now become more evident in the church’s prayer and in her consciousness, through a new awakening of the sacred Scriptures in the Roman Rite.”

“To know the prayers of the Missal is to begin to learn how to pray scripturally, which is such a precious gift to God’s faithful people,” Archbishop Roche said.

“To know the prayers of the Missal is to begin to learn how to pray scripturally, which is such a precious gift to God’s faithful people, that brings with it the seeds of renewal,” Archbishop Roche said.

Prior to the Second Vatican Council, almost all the liturgical texts were in Latin. But the liturgy constitution—the first conciliar document to be approved by the council fathers, on Dec. 4, 1963—changed all that by allowing the use of the vernacular. In his lecture, Archbishop Roche, speaking from personal experience, recalled that while the work of translation is of “immense importance,” the task is far from easy because “there are many theories and controversies” that can lead to “a battlefield of contrasting and opposing opinions.”

“Even the most inexpert of protagonists have their opinions and can be highly vocal and self-opinionated,” he said. He recalled with humor the adage about “being able to negotiate with terrorists but not with liturgists.” He said that whatever the limitations of the earlier translations, he felt the new translations have been an improvement.

He recalled with humor the adage about “being able to negotiate with terrorists but not with liturgists.”

Archbishop Roche recalled that when the bishops’ conferences of England and Wales, Scotland and Ireland issued a statement on the Eucharist in 1998, Cardinal Basil Hume, then archbishop of Westminster and a Benedictine monk, wrote:

Commenting on this, Archbishop Roche remarked, “It is in the Eucharist that we find the genetic code of the church.”

He drew attention to “two dimensions of the liturgy of which we should never lose sight as they describe the very nature of the church.” The first—the synchronic dimension—is that “as Catholics, we are, here and now, united to every other Catholic throughout the world, and through our local bishop, we are united to the pope, the successor of St. Peter.”

“This connection marks and guarantees our belonging, without which we are alone, outside the community founded by Christ and built on the Apostle Peter,” he said.

The second dimension—the diachronic dimension—is that “in the church we are also united to all the people of faith who ever lived and believed and all the Catholics who will ever live and believe in the future.”

“Our responsibility is to implement that reform in faithfulness to what we have received and not to be promoting things which are not of the mind of the church even if loudly expressed.”

Summarizing this, he said, “We might speak of the synchronic dimension of liturgy as uniting the whole church around the world, and of the diachronic dimension as running through time into eternity.”

The English archbishop reminded his audience that “whenever we assemble for the celebration of the Eucharist, we are not simply gathering as this community from this particular place, but we stand at the crossroads of all life and on the very threshold where time intersects with eternity—our gathering is greater than what the eye can see. We are entering into the mystery of Christ, who, because of the incarnation and the paschal mystery, makes possible the flow or the ‘passage of time’ to enter into the ‘always of eternity’ and to be lifted up and transformed.”

In other words, he said, “the liturgy is the place where the two worlds meet.” He noted that “many liturgical misunderstandings of the past and present can be traced to a failure to acknowledge this characteristic, which clearly should be evident in all Catholic liturgy.”

“The reform of the liturgy as captured in the Roman Missal is and remains our guide for understanding and implementing a correct appreciation of the liturgy,” Archbishop Roche said.

He concluded by reminding the professors and students at San Anselmo as well as the wider church: “We are not creating or reforming the liturgy; that has already been done by the church’s highest authority, an ecumenical council. Our responsibility is to implement that reform in faithfulness to what we have received and not to be promoting things which are not of the mind of the church even if loudly expressed.”

Gerard O’Connell is America’s Vatican correspondent and author of Inside the Election of Pope Francis. He has been covering the Vatican since 1985.