‘It is not a sin to get a vaccine’: This Catholic bishop delivers clear and concise Covid messaging. 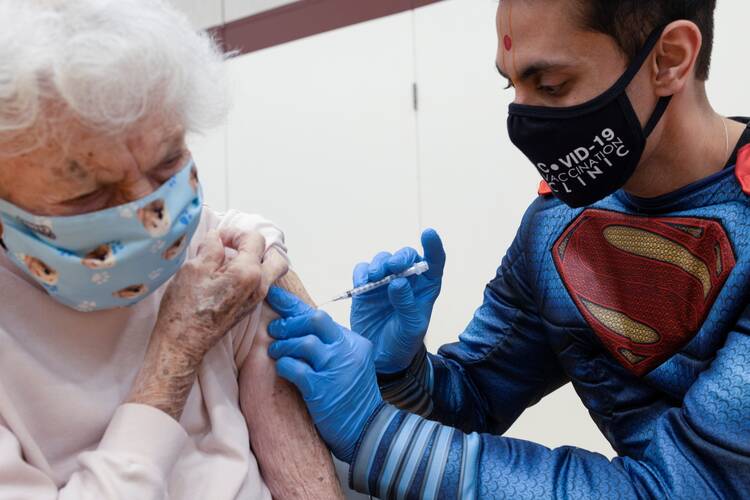 Bishop Joseph Tyson’s message is clear and concise: “It is not a sin to get a vaccine.”

The Diocese of Yakima serves the Catholic community in central Washington State, home to a large population of farmworkers from Mexico and Latin America. The area was hit hard in the early days of the pandemic; a priest from the diocese was the first in the United States to contract Covid-19. Bishop Tyson recalled the early days of the pandemic, when masks and hand sanitizer were sparse and illness seemed to threaten everyone. A year later, with a mass vaccination program expected to kick into high gear in the coming months, Bishop Tyson said vaccine hesitancy caused by misinformation about Catholic moral teaching could further threaten already vulnerable communities.

Disinformation about the vaccines has been prevalent since the start of the pandemic, and some of it circulates in Black and Hispanic communities. Then in recent weeks, the U.S. Conference of Catholic Bishops joined a handful of other U.S. bishops in questioning the morality of a vaccine produced by Johnson & Johnson, a single-dose regimen that could be especially effective in reaching rural and underserved communities, like those in the Diocese of Yakima.

While some bishops have said Catholics should opt for the Pfizer or Moderna vaccines if given a choice, which is not a possibility in most places, others have gone so far as to say Catholics should not accept the Johnson & Johnson vaccine, pointing to a controversy stemming from the use of cells associated with abortion used in the creation of the vaccine. But the Vatican and many Catholic moral ethicists have said that using vaccines created from these cells is morally permissible. The seemingly contradictory messages have caused some confusion—with real-world implications.

The Diocese of Orange, Calif., for example, is partnering with local public health officials by hosting a mobile vaccination event at the Christ Cathedral, but the Johnson & Johnson vaccine will not be available.

Bishop Tyson said he wants Catholics to know they should not have moral qualms about receiving any vaccine, so he visited the Yakima Valley Farm Workers Clinic on March 11 to receive the Johnson & Johnson vaccine in front of reporters and offered remarks in Spanish.

“There are many opinions around the vaccine,” he said during the press event, according to The Yakima Herald. “But it’s acceptable. It’s permissible to receive the vaccine, especially in this time of the Covid-19 pandemic.”

Bishop Tyson visited the Yakima Valley Farm Workers Clinic on March 11 to receive the Johnson & Johnson vaccine in front of reporters and offered remarks in Spanish.

In an interview with America, Bishop Tyson said he is “very concerned” about the use of fetal stem cells in the production and testing of medications, and he urged Catholics to pressure pharmaceutical companies to seek out alternative cell lines. But he said the moral teaching of the church is clear when it comes to taking any Covid-19 vaccine—especially as the pandemic continues to rage.

“I want to keep my message very simple,” he said. “It is not a sin to receive the vaccine.”

In Yakima, like elsewhere in the United States, access to vaccines has been limited. But that should change soon. In a speech on March 11, President Joe Biden said all Americans will be eligible to make appointments by May 1, though he said it would likely take longer to distribute the vaccines. Demand is expected to be high.

“I want to keep my message very simple,” Bishop Tyson said. “It is not a sin to receive the vaccine.”

Catholic leaders across the United States and around the world are trying to convince people that the vaccines are not only morally acceptable but an act of charity that could help protect others from the disease.

“We have a moral responsibility to look out for each other’s benefit, and it is an act of love to get vaccinated,” Cardinal Blase Cupich, the Chicago archbishop, told WLS-TV recently. “No one has to choose; all vaccines are morally acceptable.”

The Canadian Conference of Catholic Bishops released a letter suggesting Catholics opt for certain vaccines over others, leading the archbishop of Montreal to release his own statement that pushed back against that line of thinking.

“The Catholic Church in Montreal considers vaccination, especially in the context of the current pandemic, to be an act of charity,” Archbishop Christian Lepine wrote earlier this week. “Any authorized vaccine may be used in good conscience by believers.”

“In absence of other means to stop or even prevent the COVID-19 pandemic, the common good calls for vaccination, primarily to protect the weakest and most exposed,” said Archbishop Philip Anyolo.

A group of Catholic doctors in Kenya has pushed conspiracy theories about the vaccine, leading to a statement in support of vaccination efforts from the head of the Kenya Conference of Catholic Bishops.

“In absence of other means to stop or even prevent the COVID-19 pandemic, the common good calls for vaccination, primarily to protect the weakest and most exposed. In this regard, receiving the available COVID-19 vaccines ought to be understood as an act of charity toward other community members,” said Archbishop Philip Anyolo.

And a group of pro-life scholars released a statement through the conservative Ethics and Public Policy Center earlier this month examining the ethics behind the vaccines and concluding that it is moral for people who are opposed to abortion to receive any of the available vaccines.

Want to convince others to get the Covid-19 vaccine? Try listening to them first.
Jennie Kuckertz

“While there is a technical causal linkage between each of the current vaccines and prior abortions of human persons, we are all agreed, that connection does not mean that vaccine use contributes to the evil of abortion or shows disrespect for the remains of unborn human beings,” the statement reads.

Back in Yakima, Bishop Tyson notes that the pandemic is hardly over. He just celebrated a funeral Mass for a Catholic sister who died of Covid-19, and he still reads news about people falling sick. The diocese is working with local and state health officials to figure out how to promote vaccination and even lend a hand to people as more appointments open up, perhaps by hosting clinics at churches or providing technical help to navigate scheduling websites. His message over the coming weeks and months, he says, will be consistent.

“It’s very important that people know that the vaccines are morally acceptable,” he said.