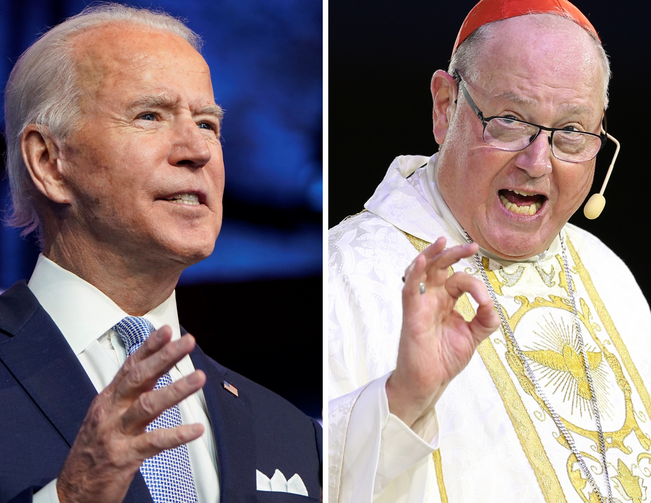 NEW YORK (CNS) -- New York Cardinal Timothy M. Dolan said he hoped the “renewal and rededication that usually accompanies the inauguration of a new president” also will be a time for violence to subside and civil discourse to resume.

He also hoped “respect for the sacredness of all life and the dignity of the human person will be revived.”

In his Jan. 13 column for Catholic New York, the archdiocesan newspaper, he wished the country’s incoming president well, but he also stressed there is more of an urgency now for the country on abortion.

Cardinal Dolan, who read a Scripture passage at President Donald Trump’s inauguration, said President-elect Joe Biden “speaks with admirable sensitivity about protecting the rights of the weakest and most threatened,” but he also added Biden “ran on a platform avidly supporting this gruesome capital punishment for innocent preborn babies.”

In a mention of the riot that took place at the Capitol Jan. 6, he said the nation was “still cringing from the disturbing violence” that was “made the more nauseating as it was seemingly encouraged by the one sworn to uphold the Constitution and the rule of law, and because it trashed the very edifice designed to be a sanctuary of safety, reason, civility and decorum.”

In his Jan. 13 column for Catholic New York, the archdiocesan newspaper, he wished the country’s incoming president well, but he also stressed there is more of an urgency now for the country on abortion.

He said Biden was eloquent in reminding the country: “The rampage we saw was not America, whose citizens are renowned for their decency, observance of the law and the respect we show each other.”

The cardinal said his column was primarily a reflection written in preparation for the anniversary of the Supreme Court’s Jan. 22, 1973, decision to legalize abortion.

He gave details of the response he once gave to a political leader who had asked him: “Why are you Catholics so hung up about abortion?”

The cardinal said he answered by agreeing Catholics were “hung up” on the issue because they are “obsessed with the dignity of the human person and the sacredness of all human life” including the “baby in the womb, but also the life of the death-row prisoner, the immigrant, the fragile elderly, the poor and the sick.”

He also said it wasn’t just Catholics who share this concern but is an issue for most Americans because it is about human rights.

The cardinal said Catholics were “hung up” on the issue because they are “obsessed with the dignity of the human person and the sacredness of all human life.”

His reply also stressed: “How can we sustain a culture that recoils at violence, exclusion, suicide, racism, injustice and callousness toward those in need, if we applaud, allow, pay for and promote the destruction of the most helpless, the baby in the womb?”

The cardinal wrote that he probably didn’t change the politician’s mind, but he may have at least clarified why Catholics are concerned about abortion.

“Abortion remains the hottest issue in our politics, with polls showing that most Americans want restrictions on its unquestioned use, and do not want their taxes to pay for it,” he wrote.

He also said the practice is not rare, but instead seen as “an unfettered right, at any time during the pregnancy, up to and including the very birth, with demands that sincere health care professionals whose consciences rebel at the grizzly procedure be forced to perform them, that tax money pay for them, that our foreign policy insists other countries promote them, and that the freedom of employers who abhor them still offer insurance to cover them.”

Emphasizing the rights of the unborn are equivalent to other human rights, he quoted Pope Francis, who said: “We defend and promote all legitimate human rights. But what use are they if the right of the baby to be born is violated?”