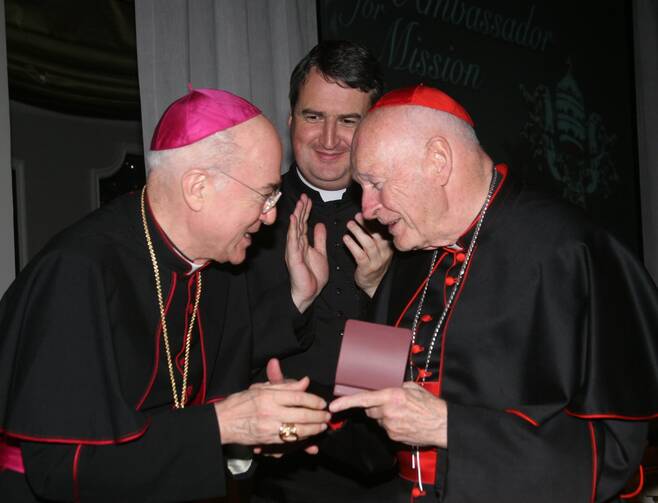 Archbishop Carlo Maria Vigano, nuncio to the United States, congratulates then-Cardinal Theodore E. McCarrick of Washington at a gala dinner sponsored by the Pontifical Missions Societies in New York in May 2012. Archbishop Vigano has since said Cardinal McCarrick already was under sanctions at that time, including being banned from traveling and giving lectures. Oblate Father Andrew Small, center, director of the societies, said Archbishop Vigano never tried to dissuade him from honoring the cardinal at the gala. (CNS photo/Michael Rogel, PMS)

VATICAN CITY (CNS) -- The Vatican's extensive report on Theodore E. McCarrick revealed several crucial details that call into question the 2018 "testimony" of Archbishop Carlo Maria Vigano, including that he did not investigate the former cardinal when ordered to do so by the Vatican in 2012.

Archbishop Vigano, who served as apostolic nuncio to the United States from 2011 to 2016, published his testimony in August 2018 called on Pope Francis to resign, claiming the pope knew about McCarrick's sexual misconduct and yet eased restrictions on McCarrick's ministry and travel.

Though informed that the report on McCarrick was being compiled, "he never came forward" to be interviewed or give evidence, a Vatican official said Nov. 10, the day the report was released.

According to the report, in August 2012, Archbishop Vigano received a letter from "Priest 3," which detailed the sexual abuse he allegedly suffered at the hands of McCarrick.

A week later, Archbishop Vigano reported the accusations to Cardinal Marc Ouellet, prefect of the Congregation for Bishops, and sought instruction on how to proceed.

Cardinal Ouellet replied in September 2012, asking Archbishop Vigano to investigate the accusations, first by verifying "the personality and the reliability of (Priest 3) by inquiring of the vicar general or vicar for the clergy of Metuchen" and "to reply to (Priest 3), requesting that he clarify his accusations against the aforementioned ecclesiastics in order to determine their truth or lack thereof."

The Vatican said it interviewed both the vicar general and vicar for clergy of the Diocese of Metuchen, as well as Priest 3. All three testified that they were never contacted by the former nuncio.

Archbishop Vigano called on Pope Francis to resign, claiming the pope knew about McCarrick’s sexual misconduct and yet eased restrictions on McCarrick’s ministry and travel.

"Priest 3 stated that he was 'disappointed' by (Archbishop) Vigano's failure to respond, and that he 'felt that the nuncio was not paying attention to something that to me was very important," the report said.

In his August 2018 "testimony," Archbishop Vigano claimed several members of the Roman Curia, including Cardinal Ouellet, were aware of alleged "sanctions" imposed on McCarrick by Pope Benedict XVI.

However, in an August 2018 interview with Lifesite News, Archbishop Vigano said the sanctions were "private." Then in an October 2018 letter, the archbishop said that the alleged measures were "not technically 'sanctions' but provisions, 'conditions and restrictions.'"

Several sections of the Vatican's report were devoted to McCarrick's activities during Archbishop Vigano's tenure as nuncio to the United States.

In his 2018 "testimony," Archbishop Vigano said that then-Cardinal McCarrick continued to actively travel and appear at public events despite "sanctions" imposed by Pope Benedict in which he "was to leave the seminary where he was living, he was forbidden to celebrate (Mass) in public, to participate in public meetings, to give lectures, to travel, with the obligation of dedicating himself to a life of prayer and penance."

However, the Vatican's report revealed several messages and correspondence between Archbishop Vigano and then-Cardinal McCarrick, indicating that despite his awareness of those restrictions, the former nuncio participated and even invited McCarrick to several events.

[Related: McCarrick kept a robust public presence during years he was allegedly sanctioned.]

In a 2011 message to Archbishop Vigano, the report said, McCarrick wrote, "I wanted to express my deepest gratitude to you for your kindness in including me and my secretary in the invitations to the splendid dinner which we enjoyed very much at the nunciature."

It also states that McCarrick would often keep Archbishop Vigano "informed of his activities."

Archbishop Vigano's "decision not to take action during the first six months of 2012 in response to McCarrick's detailed reports of his travel is also inconsistent with the former nuncio's claim that he had told McCarrick that the cardinal was subject to canonical sanctions issued by Pope Benedict XVI that prohibited McCarrick from traveling and that required him to dedicate 'himself to a life of prayer and penance,'" the Vatican's report stated.

The report also stated that in June 2012, Archbishop Vigano was forwarded a letter sent by a parishioner in Maryland who described McCarrick as "a predator." The nunciature's copy of the letter included notations written by the former nuncio stating that it contained "serious accusations" against McCarrick.

Despite receiving the accusations, "there is nothing in the file to suggest that Archbishop Vigano followed up on this letter by contacting the sender, McCarrick, the archdiocese or the Holy See."

Furthermore, the report published a message sent by McCarrick to Archbishop Vigano one month later in which the former cardinal thanked the former nuncio for inviting him and his priest secretary to dinner.

"To be with you and your colleagues is a great honor and I am truly thankful for your kindness in letting us become part of your house," McCarrick wrote.

Most notably, the report states that Pope Francis was questioned regarding Archbishop Vigano's statement that he informed the pope about the accusations against McCarrick in June 2013.

The pope was certain that the former nuncio “never told him that McCarrick had committed ‘crimes’ against any person, whether adult or minor, or described McCarrick as a ‘serial predator.’”

"Pope Francis did not recollect what (Archbishop) Vigano said about McCarrick during these two meetings," the report stated. "However, because McCarrick was a cardinal known personally to him, Pope Francis was certain that he would have remembered had Vigano spoken about McCarrick with any 'force or clarity.'"

The pope was also certain that the former nuncio "never told him that McCarrick had committed 'crimes' against any person, whether adult or minor, or described McCarrick as a 'serial predator,' or stated that McCarrick had "corrupted generations of seminarians and priests," the report added.

Furthermore, the Vatican said several witnesses, including a priest "who knew Vigano well," recalled that Archbishop Vigano "expressed satisfaction" with Pope Francis' election, believing that he would address the need for economic reform.

"The priest stated that 'the way Archbishop Vigano spoke so enthusiastically of the pope it sounded like he considered him an ally, so much so that it left me with the impression that he was going to be called back to Rome to help with the reforms,'" the report said.

More Stories from America:
– Vatican report tracks McCarrick’s rise despite allegations of abuse and misconduct
– U.S. Catholic leaders react to the McCarrick report
– McCarrick kept a robust public presence during years he was allegedly sanctioned.
– Explainer: What the church has done to fight clergy sex abuse since 2018’s ‘summer of shame’