Why boxing was the most Catholic sport for almost 100 years 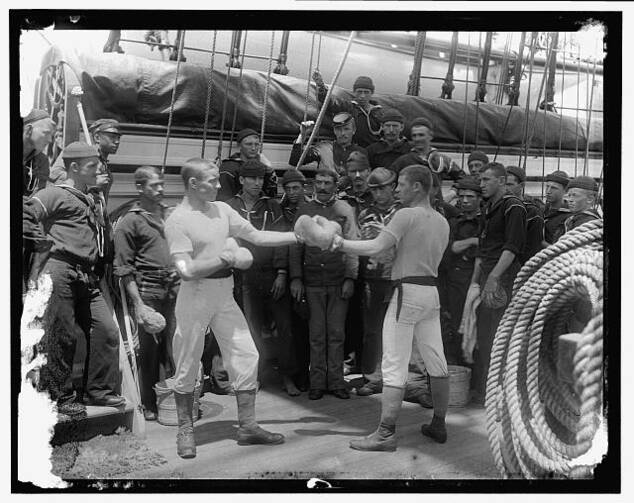 An informal boxing match sometime between 1890 and 1910 (Detroit Publishing Co., P., retrieved from the Library of Congress)

From the late 19th through the mid-20th centuries, boxing was one of the most popular sports in the United States, generating journalistic attention and crowds that sometimes surpassed those for football and baseball. Pugilism, as it was once known, was especially popular among immigrant Catholics.

As late as the 1970s, boxing saturated U.S. Catholic culture. There were parish boxing clubs and matches sponsored by the Knights of Columbus, sermons about boxing by prominent bishops, and boxing columns in Catholic periodicals. Boxing lessons were common in parish schools, and priests served as trainers at all levels of the sport, a few working with titleholders like Sonny Liston and Joe Louis. The prominence of devout Catholic titleholders like Rocky Marciano, Gene Tunney and Floyd Patterson was a particular source of pride. Bishop Bernard Sheil founded the Catholic Youth Organization in 1930 to promote athletic and spiritual discipline among Chicago’s delinquent youth, primarily by training them to box. And since 1931, students at the University of Notre Dame—home of the Fighting Irish—have raised money for missions in present-day Bangladesh through an annual series of boxing matches known as the Bengal Bouts.

The prominence of devout Catholic titleholders like Rocky Marciano, Gene Tunney and Floyd Patterson was a particular source of pride.

The close association between boxing and American Catholicism also showed up in books and films. A number of books by or about Catholic boxers offered meditations on the relationship of the sport to physical as well as spiritual health. In the 1940s and 1950s, Catholic periodicals and even some devotional magazines profiled prominent boxers or fights, highlighting the moral lessons or spiritual insights of the sport. Additionally, images of Catholics in films from Hollywood’s golden age were inextricably linked with the sport. From the gentle boxing lesson given by Sister Mary Benedict in “The Bells of St. Mary’s” (1945) to the “I could have been a contender” speech by Terry Malloy in “On the Waterfront” (1954), boxing was commonly used by filmmakers to underscore the Catholicism of a particular character.

But historians of boxing almost universally explain the sport in terms of ethnicity and economics rather than religion and theology, arguing that boxing was popular because it offered opportunities for wealth and celebrity to ethnic, working-class men who were otherwise excluded from spheres of economic and social privilege. This explanation is incomplete because it underestimates the religious resonances of the sport for Catholics immersed in a devotional culture that placed spiritual value on the experience of the body in pain.

Boxing echoed and affirmed a uniquely Catholic view that understood physical suffering as a path to religious purity and bodily mortification as a tool for spiritual edification.

The aesthetics and kinetics of boxing made it uniquely suited to Catholic devotional culture before the Second Vatican Council. The corporeal brutality, the physical perseverance required of participants, the physical wounding that inevitably resulted, the ubiquity of blood—all these defining characteristics of the sport appealed to values central to the Catholic “culture of suffering” of the early and mid-20th century.

For Catholics formed within a religious economy that equated physical suffering with spiritual redemption, a boxing match enacted the central spiritual mysteries of the faith—the imitatio Christi personified in a boxer’s willingness to endure suffering for a greater cause, the Stations of the Cross in his perseverance through round after round of punishment, the stigmata in the gashes and abrasions that collected on his body as a fight wore on, and Christological death and resurrection each time a boxer was knocked down and managed to rise back to his feet.

For Catholic fighters and spectators alike, boxing echoed and affirmed a uniquely Catholic view that understood physical suffering as a path to religious purity and bodily mortification as a tool for spiritual edification. While Protestant writings and sermons at the beginning of the 20th century touted boxing’s capacity to instill virtues like masculine vigor and moral discipline in its practitioners, boxers and boxing fans within the “Catholic ghetto” inhabited a moral universe that emphasized the physical aspects of boxing, attributing an inherent spiritual value to the physical punishment that the sport of boxing engendered.

Should a Catholic priest be fighting in a boxing tournament?
Nathan W. O'Halloran, S.J.

Boxing reinforced uniquely Catholic religious ideas about the redemptive value of physical suffering at the same time it offered a powerful form of assimilation to male Catholic immigrants. In contrast to longstanding stigmas that associated Catholic manhood with feminization, passivity and deviance, the newly legitimated sport of boxing offered Catholic men, especially recent immigrants, opportunities to participate in a culturally sanctioned form of manhood and, through it, to claim white, middle-class respectability. Boxing made “American men” of Catholics even while it affirmed their connection to the deepest devotional currents of their religion. The waning of boxing from both the public sphere and from Catholic culture obscures the importance of pugilism, and the spirituality of which it was an essential part, in the American Catholic past. 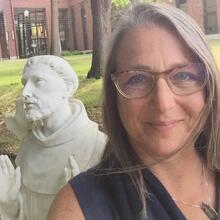 Amy Koehlinger is an associate professor in the School of History, Philosophy and Religion at Oregon State University. She is the author of The New Nuns: Racial Justice  and Religious Reform in the 1960s and is currently writing a book titled Rosaries and Rope Burns: Boxing and Manhood in American Catholicism, 1880-1960.

An article like this one about Catholics and baseball would be one I'd cherish. Go Padres!

Well actually there was such an article in Commonweal. It had this anecdote about two Catholic managers--Jack McKeon and Tommy Lasorda:

"One of McKeons partners in faith is Tommy Lasorda, a former Los Angeles Dodgers manager. At church one morning in Cincinnati, McKeon watched Lasorda light a candle. Later, he said, when I got to home plate, I said, Tommy, I saw you light a candle, but it wont work. After you lit it, I went up behind it and blew it out."