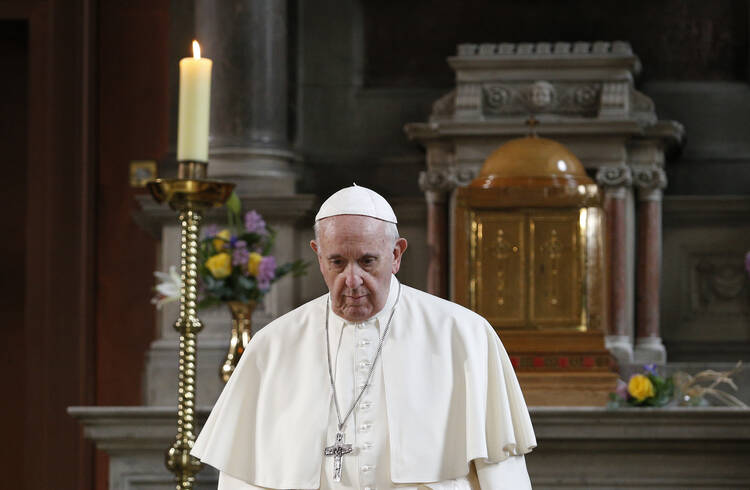 Pope Francis has accepted the resignation of the Auxiliary Bishop Alexander Salazar of the archdiocese of Los Angeles, after an allegation of his misconduct with a minor in the 1990s was deemed credible by the archdiocese’s independent Clergy Misconduct Oversight Board. Pope Francis’ decision to accept the resignation is in line with his zero-tolerance policy in cases of abuse.

The Vatican announced this today, Dec. 19, and at the same time released a letter from Archbishop Jose H. Gomez of Los Angeles, in both English and Spanish, that gives background information on the resignation and the steps that led up to it.

In his letter dated Dec. 19, Archbishop Gomez, who is also vice president of the United States Conference of Catholic Bishops, revealed that in 2005, a year after Monsignor Salazar was ordained a bishop, “the Archdiocese was made aware of an allegation against Bishop Salazar of misconduct with a minor.” Archbishop Gomez said “the allegation was never directly reported to the Archdiocese, it was investigated by law enforcement in 2002 and the District Attorney did not prosecute.”

Let us continue to stay close to the victim-survivors of abuse, through our prayer and our actions

Archbishop Gomez revealed that “the accusation against Bishop Salazar stemmed from alleged misconduct that was said to have occurred in the 1990s, before he was ordained a bishop, when he was serving as a parish priest.”

He explained that since Bishop Salazar “was a bishop at the time the allegation was received, the Archdiocese referred the matter to the Congregation for the Doctrine of the Faith at the Holy See, which conducted an investigation and imposed certain precautionary measures on the ministry of Bishop Salazar.”

Archbishop Gomez does not indicate exactly when these measures were imposed or what they consisted of.

Archbishop Gomez states, however, that “since the allegation was first brought forward, Bishop Salazar has consistently denied any wrongdoing.” Consequently, the archbishop said he “requested and received permission from the Congregation for Bishops at the Holy See to submit the allegation to the Archdiocese’s independent Clergy Misconduct Oversight Board.”

Archbishop Gomez revealed that the board found the allegation to be credible. “I submitted its findings and recommendations along with my own votum to the Holy See to make its final determination as to Bishop Salazar’s status,” he said.

Bishop Salazar was ordained priest for the archdiocese of Los Angeles in 1984, and appointed auxiliary bishop by St. John Paul II on Sept.7, 2004. He was ordained bishop on Nov. 4 of that same year. He was born in Costa Rica in 1949 and settled in Los Angeles with his family in 1953. He became a U.S. citizen at age 18. Bishop Salazar served most recently as Vicar for the Office of Ethnic Minorities of the archdiocese of Los Angeles.

Archbishop Gomez, who has headed the Los Angeles archdiocese since March of 2011, does not provide any dates in his letter regarding when he first submitted the information to the Holy See, or when he presented the conclusions of the investigation at the archdiocesan level to Rome.

In his letter, Archbishop Gomez expressed his gratitude to Pope Francis for his “loving concern for the family of God here in the Archdiocese of Los Angeles” and said “these decisions have been made out of deep concern for the healing and reconciliation of abuse victims and for the good of the Church’s mission.”

He concluded by inviting the faithful, “Let us continue to stay close to the victim-survivors of abuse, through our prayer and our actions.”

The continual drip, drip, drip of bad catholic clergy abuse news is making it virtually impossible for any of us to move forward. All of you, release the Truth now, before we all die of shame, rage, or boredom. Stand up and be counted. Stand up and say, “Never Again”.

Unless and until Roger Mahony is defrocked, these actions mean NOTHING.