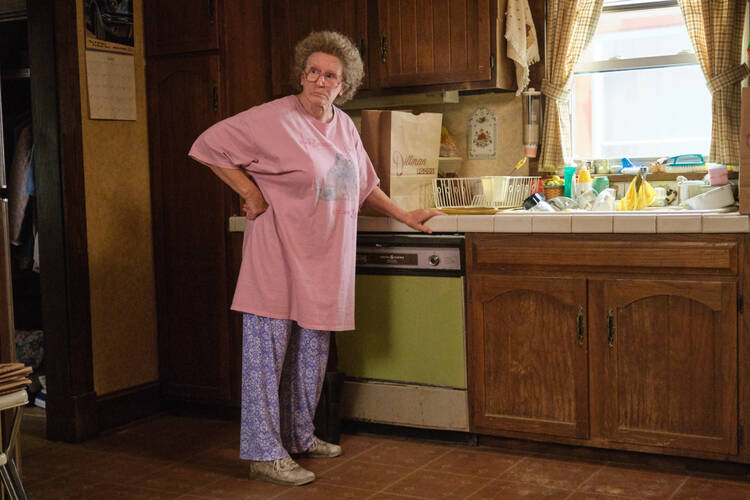 “Hillbilly Elegy” dropped on Netflix this week, reigniting an old fight: how to paint the poor.

Let’s unpack this critique, because how the poor are represented matters.

Preachers, activists, journalists and filmmakers have forever told stories about the homeless, indigent and downtrodden. “Poverty is at the very center of the Gospel,” Pope Francis has said. “If we remove poverty from the Gospel, no one would be able to understand anything about the message of Jesus.” And we cannot get to know the poor without telling stories about them.

The problem arises when those stories dehumanize their subjects by painting them in their worst light, cutting out slices of health and prosperity around them, and omitting important historical and sociological context. If I respond to the picture of a starving child with a credit card and a smile, without trying to understand the whole picture, including my part in the systems that created the starvation, and embracing the full humanity of them and their community—well, that’s entertainment.

One of the first writers to introduce the idea of pornographic exploitation of poverty was a Danish aid activist named Jorgen Lissner. “There is no denying that the starving child image has been helpful in opening a lot of people’s eyes to the harsh realities of the world in which we live,” Lissner wrote in a landmark 1981 essay, “Merchants of Misery.” It falls to the level of pornography when “it exposes something in human life that is as delicate and deeply personal as sexuality, that is, suffering,” while offering an unrealistic overall picture and keeping “the myth alive that material wealth is the very foundation of a decent quality of life.” Poverty porn makes the viewer more human than the subject.

“Hillbilly Elegy” is a compelling family drama about addiction; it is not a political movie. For his book, Vance took heat for eschewing policy prescriptions and economic analysis in favor of a libertarian self-help ethos and condemnation of the welfare state. But the movie’s portrayal of poverty doesn’t shock like those famous images of famished Ethiopians in the mid-1980s, which formed a generation’s perception of an entire country.

At the same time, “Hillbilly Elegy” does define some characters and communities almost entirely by their suffering. I would have liked more scenes of genuine human happiness in the cracks of the boarded-up Ohio main street. It would have been nice to see in the movie, for example, a Wal-Mart checkout woman going home after her nauseatingly underpaid shift, cracking open a cold one, inhaling the sweet smell of cut grass, and fiddling an old-time tune on the porch with her banjo-playing brother. Joy to the world, and just as true as her unfairly low wages and Percocet addiction. “Even poor people tell jokes and have fun,” says John Edwin Mason, a professor of African history and the history of photography at the University of Virginia.

The invention of photography in the first half of the 19th century coincided, he notes, with a battle over slavery, the industrial revolution, the rise of the labor movement and post-Enlightenment scientific studies of race and poverty. “In all those cases, images were used to portray subjects as inferior,” he says. “And how African-American and Appalachian communities have been portrayed over time have a lot in common.”

“Hillbilly Elegy” defines some characters and communities almost entirely by their suffering.

In the 20th century chronicling poverty became a genre. Famous early efforts included Jacob Riis’s How the Other Half Lives (1890) and James Agee and Walker Evans’s Now Let Us Praise Famous Men (1941).

In the 1960s, President Lyndon Johnson declared a war on poverty, and picked Appalachia as a stage to showcase squalor. An army of storytellers marched into the hills, including a Canadian filmmaker named Hugh O’Connor. In 1967, he was murdered in Kentucky by a local landlord named Hobart Isom who was angry at what he believed was a media campaign to denigrate Appalachia.

It is worth spending time with this case, and we can, thanks to a brilliant 2000 film, “Stranger with a Camera,” directed by a Kentucky filmmaker, Elizabeth Barret. The murder is a shocking, and surprisingly rare, case in the history of documenting poverty. People usually don’t answer a camera with a Smith & Wesson.

In the 1960s, President Lyndon Johnson declared a war on poverty, and picked Appalachia as a stage to showcase squalor.

In her twin roles as storyteller and Kentucky neighbor, Barret felt called to probe what had happened more deeply. “As a filmmaker, I felt that O’Connor's death had something to teach me,” she says in her engaging, meditative voiceover of the film. “What can I learn from this story, now that I have stood on both sides of the camera?”

Because there is another side to the story. Barret, of course, condemns the killing, but also points straight to exploitation of Appalachia. Some outsiders, she says, “mined the images the way the companies had mined the coal.” Barret felt insulted, she says in the film, when filmmakers “focused only on the deprivation, and didn’t look past it to the lives that are the real wealth of the culture.”

Instead, Barret interviews a coal miner who made $6 a day and says that he “had a pretty good life.” The local newspaper publisher tells her journalists never to show the poorest people in town so as not to embarrass them. These are the compromises with reality people make when they ground themselves in their community in a way that outsiders can avoid when they just take their pictures and leave.

“The response to the film had helped make people aware that Appalachia is a deeply complicated place.”

Hobart Isom was wrong to kill, says Barret, “but the filmmaker’s job to be true to the experiences of both Hugh O’Connor and Hobart Isom, and in the end to trust that that is enough.”

I love Barret’s movie because it deeply humanizes storyteller and subject, and challenges both to do better.

“There’s never a bad time to be asking the questions Barret poses,” says Roger May, a West Virginia-based photographer and educator who has taught the film. “Don’t just tell me what the symptoms of poverty are, stay with it long enough to show me and tell me what the causes are,” he says. “Don’t just show me poor people, tell me why they’re poor.”

Chris Arnade, author and photographer of a 2019 book about America poverty, Dignity, tells me it is essential to edit with respect and sensitivity. “I probably dinged 20 pictures from my book because they showed people at their worst,” he says.

In the end, communities should be empowered to form their own narratives. “Stranger with a Camera” was produced by Appalshop, a media production company founded in 1969 to help Appalachians tell their stories.

“If you grew up in Appalachia, you were inundated by these images, and many were degrading,” says Dee Davis, executive producer of “Stranger with a Camera.” (Elizabeth Barret was not available for an interview.) “I think Hobart Isom was crazy, but people on this side of the camera were tired of getting kicked around.”

Aided by technology, a new generation of photographers and documentarians has become more attuned to diversity, and the importance of nuanced context, says Mr. Mason, the U.V.A. scholar. And to that end, he adds, maybe the controversy over “Hillbilly Elegy” has been good.

“The response to the film had helped make people aware that Appalachia is a deeply complicated place.”

John W. Miller is a Pittsburgh-based journalist and filmmaker, and co-director of the PBS film “Moundsville.”