Review: What you want to know about James Martin, SJ (but were too afraid to ask) 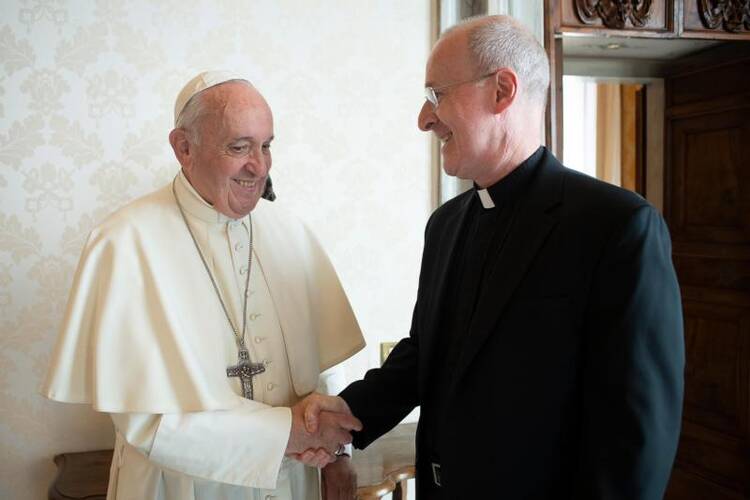 The struggles involved in writing a biography of a living person must be similar to the struggles that go into writing a profile. On the one hand, to your advantage, the person is readily available for interviews, fact-checking and providing background materials. On the other hand, the person you are writing about is in some ways always hovering over your shoulder like the recording angel.

This is why it is refreshing that Jon Sweeney’s biography of James Martin, S.J., (full disclosure, I know and have worked with both) feels more like a conversation than a celebrity profile. The best biographies are driven by the questions all writers have to answer when it comes to writing about people: What makes them tick, what makes them compelling characters, and why should the reader care?

Most readers will pick up this book due to the scale of Father Martin’s audience and perhaps due to their curiosity about how that audience grew. A “celebrity priest” in 2020 is an anomaly in a time when the U.S. Catholic Church is contracting and the number of nonreligious Americans is growing. Fewer than 40 percent of Americans say they trust clergy. (For context, according to Gallup, the highest trust level is in nurses and the lowest is in members of Congress.) And there are fewer Catholic clergy every year. So when many Americans encounter Father Martin on The Colbert Report or CNN, writing for The New York Times or in his very active social media presence, they may have never actually interacted with a priest before.

Sweeney’s emphasis throughout the book is on the fact that in spite of how much his audience has grown, Father Martin’s ministry has firmly remained focused on the pastoral.

Sweeney’s emphasis throughout the book is on the fact that in spite of how much his audience has grown, Father Martin’s ministry has firmly remained focused on the pastoral. Jesus is mentioned more in this book than those unfamiliar with the Spiritual Exercises and Ignatian spiritual direction—both centered on encountering Jesus—would expect. Sweeney also makes it clear that Martin sees his writing as a form of spiritual direction, and that in the recent kerfuffle over his ministry to L.G.B.T. Catholics, that has not changed. Father Martin’s books, podcasts, social media posts and articles largely focus in one way or another on helping the reader to develop their relationship with God, and his particular emphasis on following and building a closer relationship with Jesus is, well, jesuitical, in the root sense of the word.

Shadows in Prayer: The seven D's of the spiritual life
James Martin, S.J.

Sweeney’s job in this book is not to do a deep dive or an academic analysis but to contribute to an ongoing series of short religious biographies Liturgical Press provides for general audiences. Because Father Martin has already written several memoirs, Sweeney is able to both include bits and pieces from those and arrange them in the context of a larger life story alongside contextual conversations they had while Sweeney worked on the book. Many readers will want to know what Father Martin’s life is like on a day to day basis (very busy, like every other Jesuit). Others will want salacious details of his pre-Jesuit life (not included). And still others will want to know about his writing process. (Sweeney is nearly as prolific as Father Martin, and one thing they share is a love of research and writing.)

But most will come away having met or learned more about someone who has a clear vision of his ministry. That may not sound like much; there are, after all, still religious people all around us. But in spiritual direction, the emphasis is not just on us as individuals. It is on us as individuals seeking a relationship with our creator. What Sweeney’s book ultimately gives us is a deeper understanding of the life of someone who has helped many people develop and deepen that relationship.

This article also appeared in print, under the headline “Writer and priest,” in the March 2, 2020, issue.

@kayaoakes
Show Comments ()
Join the conversation: Login or create an account
Before you can comment, you need to update your profile to include your first and last name, as required in our comments policy. Then reload this page and you'll be set up for commenting. Update your profile