‘By the Grace of God’: A real-life tale of sex abuse in the French church 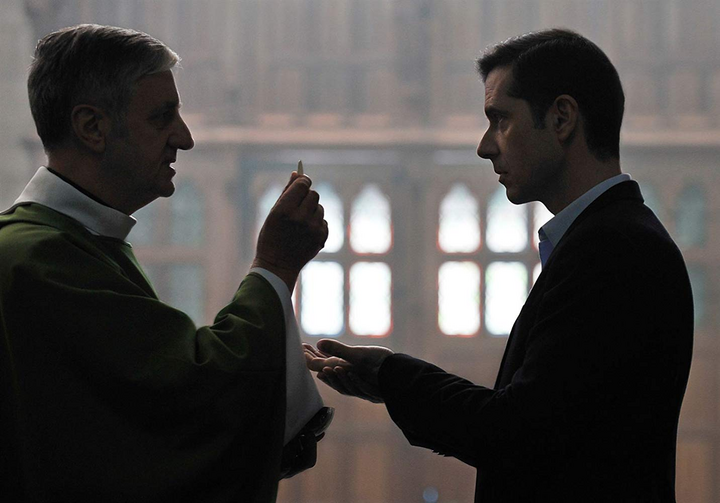 The title of François Ozon’s only slightly fictionalized film “By the Grace of God” is invoked by the very fact-based Cardinal Philippe Barbarin (François Marthouret) during a press conference about the myriad sex abuse allegations made against his underling, Father Bernard Preynat (Bernard Verley).

“By the grace of God,” Barbarin says, regarding most of the cases, “the statute of limitations has expired.” He is immediately challenged by a reporter, realizes his mistake and backpedals like the polished politician he is.

François Ozon has created a film that is connected organically to its subject matter, one that breathes and writhes and grieves in synch with its victims.

As many readers will know, the real-life Barbarin was found guilty in a French court earlier this year of having covered up, in his capacity as archbishop of Lyon, Preynat’s decades-long career of child sex abuse. What they might not know is that director Ozon has been, beginning with such outré efforts as “Sea the Sea,” “Under the Sand” and “Water Drops on Burning Rocks,” a satirist/sexual provocateur. Films like “8 Women” and the comical Catherine Deneuve vehicle “Potiche” were adult-themed, feminist farce. “In the House,” his much-praised dramatic comedy of 2012, is about a manipulative student who ruins the life of his teacher. None of which makes up the most obvious résumé for a filmmaker looking to address one of the most serious social issues of our time, and certainly of predominantly Catholic France.

But in addressing the Preynat scandal the way he has, Ozon has created a film that is connected organically to its subject matter, one that breathes and writhes and grieves in synch with its victims and that opens itself up more and more stylistically as the vastness of Preynat’s crimes is revealed. If you want to see the film as a kind of prayer, that would not be inappropriate. Ozon’s approach is masterful, his past proclivities for mischief-making nowhere to be seen. “By the Grace of God,” as moving a treatment of the priestly sex abuse issue as is likely to be made, is by its end almost a thriller, a police procedural as executed by the victims.

“By the Grace of God” is by its end almost a thriller, a police procedural as executed by the victims.

It does not start that way. It begins instead stiffly, with a propriety and decorum that reflects the first of its three principal characters (that there is a trinity of victims is certainly no coincidence). Alexandre Guérin (Melvil Poupaud) is a well-to-do executive with a wife, five children and a palatial Paris apartment who, during a chance meeting with an old school friend, is reminded of what Father Preynat did to them during his time as a scout leader. (The victims are either based on real people or are composites of them.) Alexandre has, for the most part, buried the past. Judging by the number of his offspring, he enjoys a normal sex life; he is prosperous, propertied and monied. However, he is outraged when he finds that Preynat is not only still a priest but still working with children. At this point, the story-telling is muted, largely epistolary: Alexandre’s thoughts, those of Cardinal Barbarin and their correspondence are all delivered via voiceover, as each goes through his daily life.

Preynat has the semi-remorse of the semi-penitent. What he does not have is the capacity to apologize.

What fires Alexandre up is his meeting with Preynat himself. Did such a meeting, as arranged by diocesan volunteer Régine Maire (Martine Erhel)—a woman also implicated in the Barbarin case, who fought to have her name excised from the film—take place in real life? Well, it does in Ozon’s movie, and Verley’s portrayal of Preynat is what one might call eloquently demented. Preynat admits to everything Alexandre alleges, with a sigh. But it was all so long ago, he says; what I have, he says, is “a disease.” He has the semi-remorse of the semi-penitent. What he does not have is the capacity to apologize. This is what finally, and fully, outrages Alexandre and drives him to seek out other victims in pursuit of justice against Preynat and a church that looked the other way.

He finds those other victims. François (Denis Ménochet) has not been as successful in life as Alexandre and is happy to have a cause, which he pursues lustily. But their third main companion, Emmanuel (Swann Arlaud), is a casualty, a likable but ruined man.

Alexandre is somewhat aloof and careful about his public image—his crusade against Preynat could almost be seen as caprice or the exercising of his ego. François can easily be viewed as fulfilling some other need, some space in his life, with his blustery anti-church activities.But Emmanuel is something else, and herein lies Ozon’s genius.

Why the Director of 'Spotlight' Has Hope for the Catholic Church: An Interview with Tom McCarthy
Jeremy Zipple

Are Emmanuel’s stress seizures, sexual problems, health problems and the somewhat twisted relationship he has with his girlfriend—also a survivor of abuse—the fault of Preynat? The movie does not say so. But “By the Grace of God” uses Emmanuel to shift its gears and our perceptions—about causalities and coverups, about the legacy of priestly sex abuse and the question that divides Alexandre and François: Does one work within the institution, or without it?

For Alexandre, the church means the sacraments, regardless of the sins of men; for François, leaving the church means leaving God. But that is certainly not what Ozon’s movie is about. It is about Emmanuel, and what he might—or might not—have been. He is exhibit A in the case against statutes of limitations, or crimes of the flesh in the house of the spirit.