‘Never Look Away’ is not your usual pro-life film. But it’s now available in theaters. 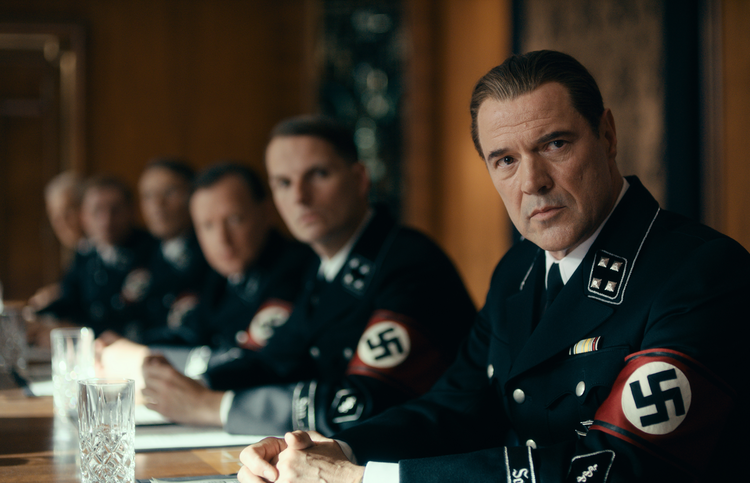 in ‘Never Look Away,’ Doctor Seeband, played by Sebastian Koch, smoothly transitions from denying the rights of the individual in the name of the Volk to denying them in the name of class struggle. (Photo: Sony Pictures Classics)

Admittedly, pro-life cinema occupies a narrow niche. Each year, an earnest, low-budget film makes the case against abortion, infanticide or euthanasia. “Gosnell” (2018), the chronicle of the Philadelphia abortionist convicted of multiple counts of murder, and “Unplanned”(2019), the account of the conversion of Planned Parenthood clinic director Abby Johnson to the anti-abortion cause, are sturdy examples of the genre. On occasion, however, a lavish, mainstream film develops an indictment of our culture of death that rises far above agitprop. Nominated this year for the Academy Award for best foreign film, “Never Look Away” is such an unexpected prosecutor.

Directed by Florian Henckel von Donnersmarck, the sprawling film (more than three hours in length) follows the life of the artist Kurt Barnert (Tom Schilling) from his childhood in Nazi Dresden to his early adulthood in Communist Dresden and then to his mature adulthood in the arts community of West Germany’s Düsseldorf. As the artistic and romantic adventures of Kurt unfold, the director depicts the lethal cultures generated by National Socialism and Communism.

In ‘Never Look Away,’ the murderous eugenicist and the abortionist, the Nazi and the Communist, become one.

In the opening section, the film focuses on the loving relationship between the child Kurt and his eccentric, art-loving Aunt Elisabeth (Saskia Rosendahl), a schizophrenic. After an outburst of violence, the family confides her to the care of a medical doctor, Professor Carl Seeband (Sebastian Koch). An officer in the Third Reich’s health police, on a campaign to sterilize the disabled, Seeband orders her removal to an institution he controls.

In a heartbreaking scene, Elisabeth screams and resists in vain as the health-police attendants drag her into avan. After a cursory interview, Seeband orders her forcible sterilization. When he attends a pivotal meeting of the medical officers leading the sterilization campaign, all arrayed in their crisply pressed S.S. uniforms, Seeband beams as the head doctor announces that sterilization will now be replaced by execution of the disabled. With a flick of his pen, Seeband condemns Elisabeth to death. A lengthy scene depicts the killing of Elisabeth and other disabled women as smiling nurses invite the women to enter a shower room into which the nurses calmly send poisonous gas.

In the section set in postwar Communist Dresden, Kurt pursues art studies and due to his technical skill, makes his mark as an artist painting dreary frescoes in the regime’s social-realist style. He begins an affair with Ellie (Paula Beer), who happens to be the daughter of Professor Seeband. When Ellie becomes pregnant, Seeband forces her to undergo an abortion at his own hands on the false pretense that some mysterious health problem will prevent his daughter from bringing the child to term.

The director underscores the cold and coercive nature of the abortion as the camera dwells on the gleaming silver instruments the doctor will use in the operation. It is only after the abortion that Ellie tells Kurt the truth about her father’s past as she relates a childhood memory of her father preening before a mirror in his S.S. uniform.

The artist has overcome the culture of death by unmasking Germany’s genocidal past.

In the person of Professor Seeband, the murderous eugenicist and the abortionist, the Nazi and the Communist, become one. The doctor smoothly transitions from denying the rights of the individual in the name of the Volk to denying them in the name of class struggle.

In the film’s final section, the married Kurt and Ellie flee to the West to escape the ideological constraints of East Germany. Learning from his Russian protector that war-crimes investigators are zeroing in on the leaders of the Nazi euthanasia campaign, Seeband also flees to the West and smoothly morphs into a bourgeois liberal, intoxicated by his professional stature.

After flailing in the pop-art trends of Düsseldorf, Kurt finally finds his own artistic voice in a species of magical realism. He reworks old photographs into painted images that are progressively blurred into a ghostlike mist. His masterpiece juxtaposes an old photo of his Aunt Elisabeth hugging him with a headshot of his hated father-in-law. (Whether Kurt has realized Seeband’s actual link to his murdered aunt or whether this is due to mysterious inspiration remains unclear.) From the canvas, victim and executioner confront the public with a dream-like stare.

Now internationally acclaimed, the artist has overcome the culture of death by unmasking Germany’s genocidal past. He has also overcome it in the person of the infant son his wife Ellie brings to a triumphal press conference. Seebald the abortionist and the genocidal eugenicist, the strutting Nazi and the Communist, is exposed as killer and liar.

You do not need to hunt down “Never Look Away” in an obscure church basement on a Sunday afternoon. Thanks to Sony Pictures and Walt Disney Studios, this cinematic icon of the culture of death is playing at a theater near you.

Socialism killed a 150 million in the 20th century. Communism which was often called scientific socialism killed about 100 million and National Socialism led to about 50 million more. Any doctrine that suppresses human freedom always leads to massive death.

Precisely. That's why democratic socialism works so well in the social democracies of northern Europe. Not that people become perfect, or avoid the tragedies that self deception and naivete and bad decisions can bring on, but producing the "perfect man' is an enterprise pursued by those murderous regimes you cite and often, in history, by the Catholic church, not by social democracy.

The countries of northern Europe are free market capitalist countries. They have high taxes and generous social programs. They are also extremely homogeneous. Sweden is now having problems with immigration. Socialism has never worked anywhere. One exception, Israel. But Israel gave it up after one generation.

Where did socialism kill 150 million people?

Mainly Europe and Asia. I exaggerated a little. It was closer to 140 million dead.

I'm confused. This article is about practices forced on women. The pro-life (in a very narrow definition of pro-life) movement in the USA is opposed by a women's rights pro-choice movement. So what's the analogy supposed to be in regard to this film and the situation in the USA?

It has the word abortion, therefore it's an abortion film too. Magic.

Not a single mention of the artist Gerhard Richter? The film is loosely based on his life, I don't believe it's a message film. Like all great art, it makes numerous points, without moralizing, while weaving together time and events and characters into a a plausible whole. Like all really good art, this film speaks for itself, the tragedy of the events, whether historically or literally precise speaks for themselves. What is true, what gives this film its power is the truth of the human condition as it is depicted. This film is not about political structures or morality it is rather about humans, and how they navigate a world shared with all the flawed humans they are immersed with. This film has a message of hope, not that human cruelty or ideological purity can be defeated but that in the midst of such horror the human qualities of love and hope can prevail. The protagonist in this film is love, and love prevails, the old verities as Faulkner might say. It's a great film. I watched it, not in a church basement but a mainline theater.

I am so happy to share this wonderful testimony thank you Dr. Ogbe for the help you redeem to me I will be forever grateful now my wife is back to me and everything is alright if you want your relationship in a better state, need your ex back or any type of problem at all email Dr Ogbe for help contact directly to my email (theangelsofsolution@outlook.com) thank you.....