'Wheat That Springeth Green,' by J. F. Powers: May Selection 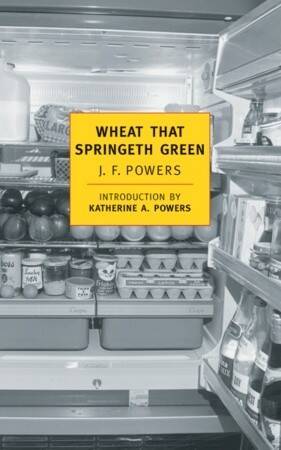 Over his lifetime, J. F. Powers published dozens of stories and two novels—the first at age 43 (April’s Catholic Book Club selection) and the second at age 71. Powers agonized over his second novel for 25 years. In a sense, Wheat That Springeth Green conveys the anguish of a writer trying to make sense of the world from the early 1960s to the late 1980s. It tells the story of a priest, who grows up in the late 40s, is ordained in the 50s and who struggles mightily with the changes of church, society and culture that exploded in the summer of 1968. Powers artfully describes the world that Fr. Joe Hackett inhabits as a pastor in a suburban town. While out on a beer run, Joe passes the defense plant (producing cones and casings for missiles) and the mall that the plant owns. Joe ponders the scene:

Cones [the defense company]…was said to be so diversified that it was crisis-proof. Joe hoped that this was true, since many of his parishioners earned their daily bread there, but he also hoped that those who earned it by producing doomsday weapons could find other work. For Joe to say nothing, living among and off them as he did, was prudent but hard when a whiff of self-righteousness came his way, hinting that he was beholden to the freedom-loving military-industrial-complex for protecting him from its opposite number in freedom-hating you-name-it. But then, running a parish, any parish, was like riding in a cattle car in wintertime—you could appreciate the warmth of your dear dumb friends, but you never knew when you’d be stepped on, or worse (103).

Joe gets stepped on often—by his fellow priests, his administrators and the folks who populate his town and parish. He also gets himself in trouble. Joe is prideful, petty, shortsighted, lonely, cynical, alcoholic and imperious. Though he has no tolerance for constant talk of parish finances and takes his stand against Vietnam and war profiteering, his faith is lukewarm, and he is despairing. Indeed, as I wrote in last month’s introduction to Morte D’Urban, Powers does not elevate priests; he cracks them open and gives the reader some understanding of the tremendous complexity and contradiction that might reside within an otherwise wholly ordinary parish priest.

When Joe entered the seminary, he labored to become a spiritual athlete, a contemplative anchored in prayer. He became an outcast because of his hair shirt and Jansenist disposition toward priesthood. At his first Mass, he takes a stand against the pastor who had asked him to descend—in his vestments—at the offertory and personally pass the baskets for a special collection. Of course, the pastor would take the bait. Later, at his first assignment, Joe begins to reject the contemplative life and assumes the active life of a young parish priest. He admits to a fellow priest: “After years of trying to walk on water…it’s good to come ashore and feel the warm sand between my toes” (77). He also begins to drink and gamble, and, after some twelve years, he finally becomes a pastor in an indistinct parish. In 1968, at age 44, the diocese assigns a curate to assist him. The curate suddenly becomes Joe’s audience, and Joe indulges himself in telling of his own defeats and slights, as well as his idea of the priesthood. Yet, at the same time, Joe also helps the curate mature, and the two priests begin to cultivate a genuine friendship. Essentially, the hard truth that Joe has learnt and intends to convey to his young curate is that wisdom consists in some admixture of charity and despair (207).

Wheat That Springeth Green is a beautiful book because it mixes charity and despair, wisdom and humor. It is perhaps more thoughtful than the novel that earned Powers the National Book Award in 1963. (Edward Boyer, in his 1988 review of Wheat That Springeth Green for The New York Times, wrote that the quality of the novel should shame the literary establishment into republishing J.F. Powers’s earlier work.) Comparing the first novel to the second, one sees the difference between 1962 and 1988. Wheat That Springeth Green contains sex, curse words, strip malls, allusions to Vietnam and the Second Vatican Council and priests that dress in jeans. Joe’s life is far more complicated, far more absurd than Fr. Urban’s. Yet, both priests confront meaninglessness and change. In Urban’s case, his own talents and urbanity are finally ground under by cruel benefactors and his own subtle naïveté. For Joe, his early proclivity for spiritual prowess and righteousness gives way to a keen sense of the monotony of human sin in his parishioners, in his fellow citizens and in himself.

I urge members of the Book Club to read Powers’s second novel, especially those who enjoyed the initial offering last month. I appreciate the comments and participation in the dialogue concerning Morte D’Urban, and I look forward to responding to them in the coming days. I also anticipate a wonderful discussion on Wheat That Springeth Green. To initiate conversation, I offer three questions:

2. At key points in the novel, the author emphasizes the image of Christ’s cross (236, 303, 327). Why? Does the image change at all? Does it transform from suffering to redemption?

3. What about the title? Do you know anything about old hymns? Why do you think that Powers chose this title for the novel?

I look forward to our discussion.

Kevin Spinale
Show Comments (
26
)
Comments are automatically closed two weeks after an article's initial publication. See our comments policy for more.
MaryMargaret Flynn
8 years ago
A question. Please where do I find the discussions? Will they be appearing for the first Morte D'Urban (which I first read in the 1960ies and re-read in part for this Book Club, ) here in the comments section? I have tried to find the discussions previously and never found them. So do I return here to comments and see the postings from Kevin and others? thank you
MaryMargaret Flynn
8 years ago
I found the comments, which I am thoroughly enjoying reading for the previous books. No need to respond to the above. I am getting this book to read and look forward to the comments and summary by Kevin. Thanks marymargaret
Tim Reidy
7 years 11 months ago

The discussions will be taking place in the comments' threads. You can follow the discussion of Morte D'Urban here. Thanks for reading!

Much as I was left with a sense of futility at the end of Morte D’Urban, I finished Wheat That Springeth Green smiling and feeling more hope for church and culture than I actually would have at the time this novel was published (1988). Whatever happened to the promise of Vatican II and the Great Society?
…..Father Joe’s parish reminds me of today’s parishes in the suburban bubble where I’ve spent most of my adult life and of which I have remarked many times “We’re too rich, too self-absorbed and too ignorant of the hard-scrabble reality that most people outside the bubble wake up to every day. “
….Once a missionary from pre-earthquake Haiti came to our parish to make an appeal for help. He described the wretched conditions of those who lived on the garbage dump of Port-au-Prince where he worked and surprised us with concluding words to this effect: Give what you can but understand that it won’t help no matter how much you put in the basket. The only way you can really make a difference is by creating heaven in your own life, each one of you….teach your children that it’s not all about designer labels, name-brand degrees and prime real estate. The good life has nothing to do with those things.”
But I don’t think he ever said just what it was that would make a heaven on earth for us and the poorest of the poor.
…..Powers, through the characters of Urban and Joe, shows us that the yearning was at least his (Powers’) constant companion and preoccupation--as it is not for so many living in the bubble who are too busy trying to get more of what they already have.
… I think Joe is probably onto something when, in solidarity with the down and out, he decides to sober up and opt out of the bubble in favor of a slum parish, Holy Cross. We are given to believe by the author that this cross really will be Joe’s longed-for conduit to God, his redemption….where the tension between love of God and love of neighbor is finally reconciled in a single striving.