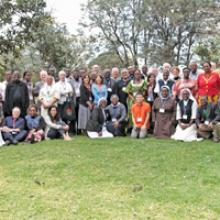 Doing Theology in Africa: Excerpts from an ethics conference in Kenya
Elias Omondi OpongoVictor B. AdangbaNovember 05, 2012

In the November 5 issue Agbonkhianmeghe E. Orobator, S.J., reports on a conference on theological ethics held in Nairobi, Kenya in August 2012. "For three days, 35 African theologians engaged in intense conversation about pressing issues confronting church and society in Africa from the perspective of theological ethics," Father Orabator writes. "Judging by its composition, methodology and focus, the conference offered a glimpse of the shape of theology in Africa today and the promise it holds for the world church."

Here we offer two excerpts from papers delivered from the conference:

Between Violence, Reconciliation Rituals and Justice in Northern Uganda

The Church in Africa and the Challenge of Post-Conflict Reconstruction

The weight and complexity of conflict and violence in a number of African countries have raised questions on appropriate mechanisms for forgiveness, reconciliation and justice. The push against impunity has led to emphasis on retributive justice at national and international level. The recent emergence of the International Criminal Court (ICC) and other international tribunals and special courts in Africa have in some cases generated tensions with the local processes of reconciliation and post-conflict reconstruction. Both the Second African Synod and Pope Benedict’s Post-Synodal Exhortation underscore the importance of justice against perpetrators of violence and traditional mechanisms of reconciliation. However, African communities have been torn between, on the one hand, advocating for restorative rituals of forgiveness and reconciliation, and on the other, calling for justice against perpetrators of violence. To what extent then can the use of traditional rituals bring healing, forgiveness and reconciliation in situations of extreme violence?

In this chapter I tell the stories of the people of northern Uganda and how they have struggled with the question of violence and justice, while at the same time exploring ways of forgiveness and reconciliation through the use of traditional rituals. Forgiveness and reconciliation is viewed as a process of healing individuals and groups that have experienced physical, emotional, psychological and spiritual violence. The discussions are part of the findings from a research I conducted in northern Uganda between January and May 2010 with follow up interrogations in early 2012. I conducted a total of 49 formal interviews with participants from the community, NGO sector and religious groups in Gulu and Atiak locations in northern Uganda. In order to maintain anonymity and confidentiality, I have chosen to give fictitious names to the participants, except for Archbishop Odama of Gulu archdiocese....

Northern Uganda has known many conflicts over the years. The most protracted of these has been the 22 year conflict between the Lord’s Resistance Army (LRA) and Government of Uganda (GOU) that has cost close to 300,000 lives; led to mass abduction of an estimated 60,000 children; and increased poverty and insecurity in the region. More than 1.5 million people were displaced, most of whom had to live in internally displaced camps for more than 20 years under very poor conditions. At the request of Uganda government, the ICC issued, in 2005, a warrant of arrest against the LRA leadership.

The population was subject to endless abuses, both from the LRA and government forces. The LRA used religio-cultural rituals to justify their recourse to violence, and in most cases forced the young abductees to kill their family members as a way of committing themselves to the rebel group. In a reaction to the way in which the government observed double standards during the conflict, Patrick, a program officer of a local NGO in Gulu asserted that, “when the government killed the abducted child soldiers in combat they would say that they have killed rebels, but when they rescued them they would say that they have rescued formerly abducted children.” The observation by Patrick was repeated by several other participants....

There have been several peace negotiation attempts, with the most recent peace talks in 2006 leading to relative peace but achieving minimum results, hence rendering the situation unpredictable. Despite the progress made in the LRA-GOU negotiations, the agreement was never signed by the LRA and the Government of Uganda (GOU). Part of the reason is that the LRA feared that a peace deal could facilitate their arrest and trial by the ICC. There were mixed reactions, both in Gulu and Atiak, about the intervention of the ICC. There were those who felt perpetrators of violence should be punished whereas others called for the resort to traditional rituals of reconciliation to cleanse the society from past atrocities. Currently the LRA has spread from Uganda into the Democratic Republic of Congo (DRC), South Sudan and Central African Republic (CAR). The local people are still afraid that the LRA could return to disturb the current peace.

The complexity of the conflict in northern Uganda lay in the fact that there is no clear distinction between the victim and perpetrator: the majority of the LRA combatants had been abducted (and were therefore victims) and forced to commit various forms of atrocities (and were therefore perpetrators) in their own community. Anthony, a community leader in Gulu, strongly asserted this point in response to the question about the approach being used for reconciliation with the former combatants:

We are all victims of this war. Whether you have lost a friend, a relative or close family member, even if you have not lost anyone that you know – we are all victims. We have had more than twenty years, not just of war, but of isolation, fear, mourning and hunger. We have no choice but to find a reconcilable way of living together. We need to resort to our rituals of reconciliation.

Who do you forgive? Who do you hold accountable, the LRA, the government or the formerly abducted children? In any case the one who did the killings around here is the child of my neighbour, and one of us could have a child who did similar killings elsewhere. If we start revenging on each other, where do you start and where do you end. We have to do a ritual that cleanses all of us from this catastrophe. However, we should never forget that justice somehow has to be done too...

There are many reconciliation rituals among the Acholi. One of them is mato oput which literally means drinking bitter juice from the roots of the oput tree. Mato oput is a reconciliation ritual between clans following incidences of killing by a member or members of one clan against the other. It is a ritual that concludes a successful peaceful negotiation. The participant interviews revealed three main characteristics of the Acholi rituals of reconciliation: the rituals were communal because an offense committed by an individual is owned up by the whole clan and an emerging conflict is communally addressed. This also implies that compensation is paid for by the perpetrator’s clan. The rituals aimed at reconciling with the spirit of the dead because ‘the dead are never dead’ as one participant observed in Gulu. Hence, every act of reconciliation is meant to harmonize the entire community, both the living and the dead. The rituals were restorative because they aimed are rebuilding broken relationships and re-establishing families that had been split by war.

Archbishop Odama, in explaining the central value of reconciliation rituals amongst different ethnic communities in northern Uganda, asserted that it was important to re-introduce the cultural values that united people and facilitated the spaces for dialogue. He underscored that the use of traditional mechanisms of reconciliation had the capacity to bridge differences and bring people into dialogue. Dr. Okumu, an Acholi anthropologist, in a similar line of thought reiterated that the Acholi reconciliation system “presupposes belief. This is very strong in people’s conviction. It is a restorative process that is expressed ritually. These processes function to keep the society together.” Similar sentiments were echoed by community leaders, NGOs and government of officials in northern Uganda...

In his Post-Synodal Exhortation, in response to the 57 propositions put forward by the Second African Synod, Pope Benedict XVI emphasized the need to carefully explore the effectiveness of traditional rituals of reconciliation:

Christians are often very scrupulous in the use of traditional rites of reconciliation. In order to assist the Catholic faithful to walk an authentic path of metanoia in celebrating this sacrament, through which the whole person is refocused upon the goal of encounter with Christ, it would be helpful if the bishops were to commission a serious study of traditional African reconciliation ceremonies in order to evaluate their positive aspects and their limitations.

The Pope further added that if reconciliation is to be effective, it has “to be accompanied by a courageous and honest act: the pursuit of those responsible for these conflicts... Victims have a right to truth and justice.” In his message on the World Day of Peace  Pope John Paul II reiterated that there can be “no peace without justice and no justice without forgiveness.” These three components facilitate reconciliation. However, how does one integrate the three into a peacebuilding process?

The church in Africa is yet to develop a practical discourse that addresses the challenge of pursuit of justice in complex judicial and legal systems of the ICC and other international tribunals...

A Theological Perspective on Peace in Cote D'Ivoir