Archbishop Cordileone: It is past time to strike down the death penalty 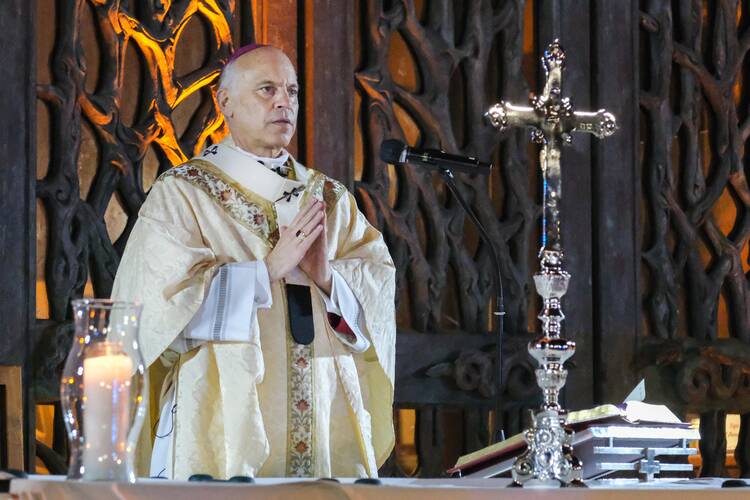 San Francisco Archbishop Salvatore J. Cordileone is pictured in a file photo celebrating Mass outside the Cathedral of St. Mary of the Assumption. (CNS photo/Dennis Callahan, Archdiocese of San Francisco)

When Pope Francis asked Catholics to pray this September for an end to the death penalty, I in turn asked my flock to join him, stating: “It is well past time that the death penalty be stricken from the books.”

Such a prayer request is particularly called for in the Archdiocese of San Francisco, which includes within its boundaries San Quentin State Prison, the regrettable home of California’s death row for male inmates. Although recently Gov. Gavin Newsom ordered it to be dismantled and the condemned sent to other prisons, the irony is not lost: The death row at San Quentin has consistently been one of the largest in the United States (which had, as of earlier this year, over 700 men awaiting execution), even though the vast majority of us here in the Bay Area are opposed to capital punishment.

As we learn more about the death penalty in its practical operation, we should ask ourselves a key question: Is it necessary to kill in order to protect society?

While the citizens of deep-blue California have twice voted to keep the death penalty on the books, no one in California has been executed since 2006. And the practice is now officially on hold after Governor Newsom issued a moratorium on its use. However, a moratorium is only a temporary solution; the legal struggle over the death penalty will continue since a moratorium can easily be lifted later by a future governor (or even by the same governor, for that matter).

The pope and his predecessors, along with his brother bishops throughout the world, hold the strong view that the death penalty should be abolished not because it is an intrinsic evil, such as murder or abortion (which involve the killing of innocent human life). It is not; that is, it is not always and everywhere wrong. But as we learn more about the death penalty in its practical operation, we should ask ourselves a key question: Is it necessary to kill in order to protect society? We can once again take our cue from Pope Francis, who revised the Catechism of the Catholic Church in 2018, declaring that the death penalty “is inadmissible because it is an attack on the inviolability and dignity of the person” and stating that the church works “for its abolition worldwide.”

Most social science evidence both here and abroad suggests that the deterrent effect from the death penalty, if any, is vanishingly small.

Most social science evidence both here and abroad suggests that the deterrent effect from the death penalty, if any, is vanishingly small. For example, a 2020 study of the death penalty in Japan, published in the journal Supreme Court Economic Review (published by the Antonin Scalia Law School at George Mason University), concluded that “neither the death sentence rate nor the execution rate has a statistically significant effect on the homicide and robbery-homicide rates, whereas the life sentence rate has a significant negative effect on the robbery-homicide rate.”

Capital punishment also carries within it the grave possibility of wrongly executing an innocent man or woman. Since 1973, according to the Death Penalty Information Center, 190 former death-row inmates have been exonerated of all charges related to the wrongful convictions that had put them on death row.

Those of us who follow Jesus Christ must also consider this: Our Lord—who from the cross where he was wrongly executed called out, “Father, forgive them, for they know not what they do” —teaches us that we must be concerned with the soul of the guilty. The death penalty abruptly ends the possibility of conversion and mercy.

Recently I had the privilege to watch via Zoom a new play by Ruth Pe Palileo, “Sons of Columbus” (commissioned by the Benedict XVI Institute), which centered on Blessed Father Michael McGivney’s patient ministry to Chip Smith, a young man on death row for killing the local chief of police. Even in 1880, to my surprise, voices in society were raised against the death penalty for this young man.

We must be concerned with the soul of the guilty. The death penalty abruptly ends the possibility of conversion and mercy.

He asked for prayers for everyone taking part in the execution, including himself: “To me this duty comes with an almost crushing weight. If I could consistently with my duty be far away from here next Friday, I should escape perhaps the most trying ordeal of my life, but this sad duty is placed in my way by Providence and must be fulfilled.”

A holy death, reconciled to God, is what we should wish for every prisoner on death row, and while there is life, there is hope for repentance and reconciliation.

The good news is that support for capital punishment has declined markedly from its peak in 1994, when Americans told Gallup they were in favor of the death penalty for convicted murderers by a margin of 80 percent to 16 percent. By 2021, just 54 percent of Americans favored the death penalty.

Yes, we need effective policing and enforcement measures to protect the innocent. We need good police officers to put their lives on the line. We need district attorneys willing to enforce the laws. We also need restorative justice ministries to bring healing to victims and to encourage reform of the penitent.

Criminal justice is also social justice. When crime rates soar, it is the least among us, the poor and minorities, who pay the highest price.

But today we no longer need capital punishment to protect the common good. If it is not necessary to kill to defend innocent life, then it is time for us to claim the higher moral ground and abolish the death penalty once for all. It is a reminder to us that the inherent dignity of every human being calls for us Americans to do better.

Listen to Archbishop Cordileone discuss the death penalty on The Gloria Purvis Podcast:

[Read next: “Archbishop Cordileone: Racism is a virus. The Acts of the Apostles shows us how to fight it.”] 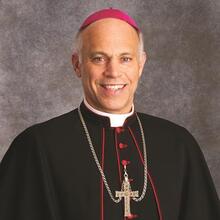 Salvatore J. Cordileone is the archbishop of the archdiocese of San Francisco.