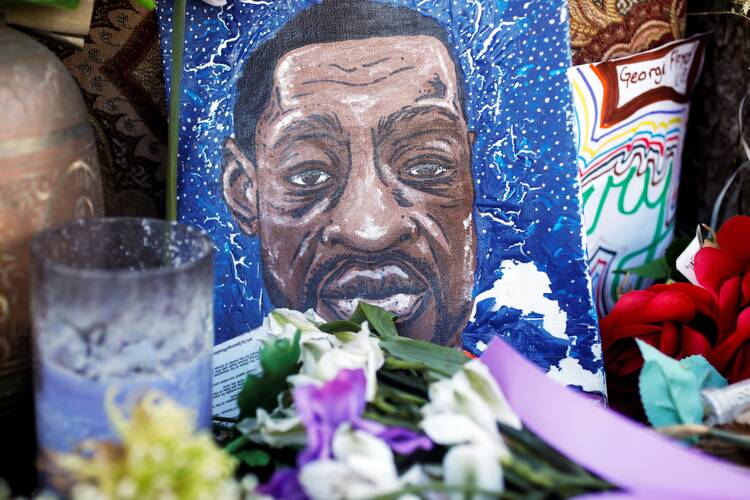 A small painting of George Floyd is seen next to Cup Foods at George Floyd Square in Minneapolis March 31, 2021. (CNS photo/Octavio Jones, Reuters)

The killing of George Floyd at the hands of police two years ago in Minneapolis sparked a national conversation about racism that continues today—the anniversary of his tragic death.

Following Mr. Floyd’s murder, the bishops of California and Black Catholic leaders formed an African-American Anti-Racism Task Force to address what they described as the “collective sin of racism.”

“After the murder of George Floyd, we knew a statement wasn’t going to do it,” said Auxiliary Bishop John Dolan of San Diego, who is heading up the task force. “We wanted to be proactive, so we got together with African American leaders and heard their story. Let them tell us why they think racism is still very much alive.”

The purpose of the task force is “to listen to one another, to engage in frank dialogue, and to take action to identify and dismantle instances of racism in our homes, in our parishes, in our schools and in the communities we serve,” according to a statement from the California Catholic Conference, the public policy voice of the Catholic Church in California.

The killing of George Floyd at the hands of police two years ago in Minneapolis sparked a national conversation about racism that continues today—the anniversary of his tragic death.

The initiative led every diocese in California to designate a point person to work with the state task force, giving feedback and sharing best practices on how to address racism in parishes, schools and religious formation programs, according to the bishops’ statement. The task force is also researching anti-racism programs at the state’s Catholic universities, seminaries, schools and diaconate formation programs.

The simple act of listening can sometimes be a challenge, Bishop Dolan has discovered.

“We had listening sessions with bishops and priests, and some would jump in and decide what racism should be or what and how to explain it,” he said in an interview with America. “And we’d always have to come back until people just stopped and listened.”

As far as he knows, most if not all of the dioceses in California have taken the initiative seriously. In addition to San Diego, he noted the work done in Los Angeles, Orange County and Oakland.

“After the murder of George Floyd, we knew a statement wasn’t going to do it,” said Auxiliary Bishop John Dolan, who is heading up the task force.

“The action is to listen and dialogue. And keep that level of communication alive in every facet of our California Catholic enterprise—in our seminars, high schools and grade schools, are we making sure that we are talking about anti-racism? If we don’t keep that dialogue alive, then there’s going to be a vacuum,” Bishop Dolan said. “And we’ve seen the result of that. Someone will be happy to fill that vacuum with hatred, fear and anxiety.”

Anderson F. Shaw, director of the African American Catholic Center for Evangelization, has taken part in the anti-racism initiative both at the state level with the conference and in his local diocese, the Archdiocese of Los Angeles.

“I think you could say without a doubt that there’s a lot more awareness of the issue of racism because of the visible treatment that George Floyd received. That was a shock to a lot of folks,” he said in an interview with America.

“The goal is to listen with our hearts, to be open, and to engage across racial, ethnic, and cultural divides with only the Holy Spirit as our guide,” the bishops said in a statement.

In the past, Mr. Shaw said, many church leaders have been quick to issue statements but slow to enact new policies. But today, he described himself as “cautiously optimistic.”

“I think this is a different time. It’s really left up to all of us,” Mr. Shaw said. “Oftentimes, folks I work with say, ‘Well, we didn’t do it. They’re doing it. They need to fix it.’ But in my experience, in terms of systemic racism especially, [church leaders] don’t know how to fix it. I don’t think they know what it is that we want. And I think we need to engage with them as to what it is we see.”

The conference called the approach a “listen, act, dialogue” model. The model itself was developed in consultation with Black Catholic leaders from across California. When the initiative was first announced Sept. 9, 2020—the feast of St. Peter Claver, patron saint of African American ministry—the bishops pledged “to listen to African American men, women and children from our Catholic community and beyond.”

“The bishops are paralyzed because there isn’t an African American among us,” Bishop Dolan said of the California bishops. “And it’s easy for us to speak and say words about racism, but we’re only speaking from a very white, male perspective. So we all agreed that it was important for us to get the voices from our African American leadership across the state.”

The task force planned listening sessions at the parish, diocese and state levels, which were intended to lead to dialogue that “may include members of the African American community but should take place in all homes, parishes, small faith communities and other Catholic organizations.” That dialogue, it is hoped, will lead to concrete action.

"In my experience, in terms of systemic racism especially, [church leaders] don’t know how to fix it," said Mr. Shaw, director of the African American Catholic Center for Evangelization.

“The anti-racism task force creates moments of conversation, where members of a community can come together to share their stories and learn new and profound things about each other,” Kathleen Domingo, executive director of the California Catholic Conference, said in an email to America. “This open dialogue helps us all grow in understanding and mercy and love.”

A recent Pew study found that opposing racism is essential to the faith of Black Americans. The study also reported that, for Black Americans, a welcoming community is more important than the race of the pastor or the congregation.

In Los Angeles, Mr. Shaw explained, the local task force is developing a list of recommendations for their ordinary, Archbishop José H. Gomez. “The task force will stay together to assist and to advise the archbishop on implementing these changes that we’ve recommended,” Mr. Shaw said. “It’s ongoing. There’s no actual end date.”

The process must go beyond statements and involve the chancery, schools and other diocesan institutions to address racism on both local and broader, systemic levels. “It’s not only to address the issue of racism at the parish level, for example, but also to look at the systemic racism that occurs many times within the offices and the hiring practices of people in the archdiocese,” Mr. Shaw said. “So all of that is in play.”

“We didn’t get here overnight, and we’re not going to get ourselves out of it overnight. It’s going to be a long term issue,” Mr. Shaw said. “And that’s the way we look at the task force.”

Hiring more diverse personnel is a good step, he said, and will require steady outreach to underrepresented communities. The task force is also considering school policies, restrictions on parent involvement and other issues minority communities face.

“We didn’t get here overnight, and we’re not going to get ourselves out of it overnight. It’s going to be a long term issue,” Mr. Shaw said. “And that’s the way we look at the task force.”

“Parishes go and create a young adult ministry, but that’s not what they’re asking for,” Mr. Shaw continued. “They’re asking for inclusion. They’re asking for the Vigil Mass. A lot of folks see that as the old folks Mass, but it’s a very convenient time for young adults. But a lot of times they don’t have music at that Mass, and if they do, it’s usually downbeat.”

Archdiocese leaders could help mediate, he said, helping young adults become ushers, lectors and eucharistic ministers. “That is where I think we’ll make a big difference,” he said.

“In terms of the issue of people experiencing individual racism on a daily basis at their parishes, there needs to be constant engagement of people on both sides,” Mr. Shaw said, noting the ongoing, long-term challenge of addressing racism passed down through families.

On a structural level, though, he believes meaningful change can happen in the near future.

“I think we’re in an environment now where, if everybody gets serious about it, something can happen,” Mr. Shaw said. “I believe that if the archbishop and his leaders are really serious about that, those changes can be made.”