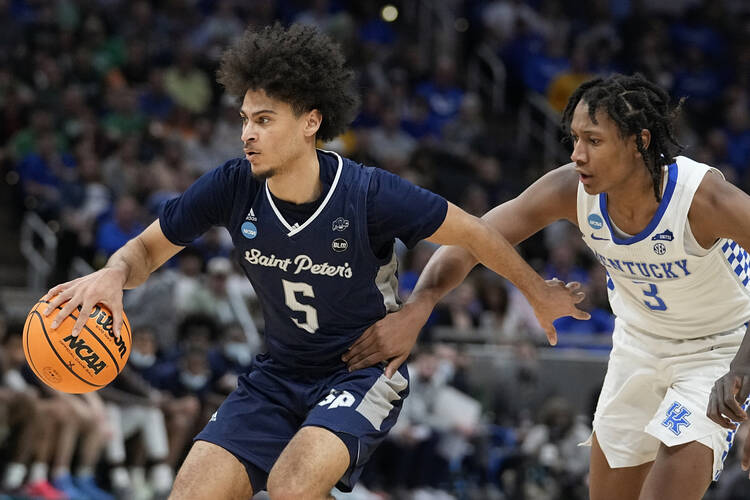 St. Peter's guard Daryl Banks III (5) drives past Kentucky guard TyTy Washington Jr. (3) during the first half of a college basketball game in the first round of the NCAA tournament, Thursday, March 17, 2022, in Indianapolis. (AP Photo/Darron Cummings)

In March Madness, nothing is guaranteed. But even in a tournament known for its upsets and unpredictability, some wins are so unexpected that they can still surprise and delight (or disappoint) even longtime fans of college basketball. The biggest surprise of this year’s competition is Saint Peter’s University, a tiny Jesuit school in Jersey City, N.J. In a true David vs. Goliath story, the 15-seeded school stunned the tournament with a victory in the first round over second-seeded Kentucky, a team many had picked to win the championship.

The win was an astonishing bracket-buster, the kind of magic that March is made of. But despite how slim the chance of a win was, perhaps fans should not have been as shocked as they were: Saint Peter’s is no stranger to beating the odds.

What makes Saint Peter’s unique, even among Jesuit schools, is its dedication to working with those on the margins. Although every Jesuit university has a commitment to social justice, Saint Peter’s stands out for living out this commitment in real time, primarily serving first-generation college students from diverse backgrounds. It is the only Jesuit school in New Jersey, with 88 percent of the student body coming from in-state. And the student population is strongly diverse, with 47 percent of students identifying as Hispanic, 18 percent as Black and 8 percent as Asian. With an enrollment of only 3,000 students, the school is small but filled with heart—-now more than ever.

Saint Peter’s stands out for living out its commitment to social justice in real time, primarily serving first-generation college students from diverse backgrounds.

University president Dr. Eugene Cornacchia described the excitement around their March Madness success as infectious. “It’s been wild, it’s been absolutely wild. It’s electrified the campus. We’ve always been a close-knit community, but it’s brought everybody together in a way that’s almost indescribable.”

In the stands in Indianapolis for the fateful Kentucky game, he remembers only a small number of Saint Peter’s fans in the stadium. But as the game continued, the cheers for Kentucky got quieter and the cheers for Saint Peter’s swelled, as even fans of the other team got excited for Saint Peter’s shocking success. Even with a subsequent win against Murray State and an upcoming trip to the Sweet Sixteen, Dr. Cornacchia’s favorite moment of the tournament is still going into halftime tied against Kentucky. It was the first moment of hope—a dawning realization of the very real possibility of a win and what it could mean for the school.

Besides nation-wide excitement and an outpouring of school pride, a strong run in March Madness can also bring with it a surge in donations and a flood of applications. Saint Peter’s has been declared a Hispanic-Serving Institution, a federal designation for universities that assist low-income, first-generation Hispanic students in accessing educational opportunities. An astonishing 99 percent of full-time undergraduates receive some kind of financial aid, with the average package totalling over $34,000. With the addition of state or federal aid, many students attend with very low or even no out-of-pocket costs, President Cornacchia says. Increased donations to the school from their March Madness success could help support Saint Peter’s mission in leading the way in making Jesuit higher education accessible to students from diverse and disadvantaged backgrounds.

Saint Peter’s has been declared a Hispanic-Serving Institution, a federal designation for universities that assist low-income, first-generation Hispanic students in accessing educational opportunities.

“Often we’re working here without the kind of attention that a lot of other schools, even a lot of other Jesuit schools, get out there in the world,” Dr. Cornacchia says, admitting that Saint Peter’s “is often under the radar.” But the national attention from March Madness “allow[s] us to let the world know that our team maybe has set the world on fire, but so do our students all the time when they graduate from Saint Peter’s.” With tweets of support for the team from everyone from Eli Manning to New Jersey Governor Phil Murphy, the country is certainly taking notice.

What? I have been cheering for Saint Peter’s for years. They are my local New Jersey basketball team. Go Peacocks!! pic.twitter.com/lHrGPgW9NL

The Saint Peter’s Peacocks are only the third 15-seed to ever reach the Sweet Sixteen, and the first team in the Metro Atlantic Athletic Conference to make it that far in the tournament. This is the Peacocks’ fourth time going to March Madness, but the first time that they have ever won a game in the competition. Making these victories all the sweeter is the fact that Saint Peter’s is celebrating their sesquicentennial, the 150th anniversary of the school. When asked if he thought there was some heavenly help involved with this coincidence, Dr. Cornacchia laughed. “Oh, I know we’re getting a lot of help from above, absolutely.”

Though not all students at Saint Peter’s are Catholic (as is the case for every Catholic school), their Jesuit identity still deeply influences the student body. Of the 15 players on the Saint Peter’s men’s basketball team, 14 of them are Black. The players chose to add a Black Lives Matter patch to their uniforms that shows their support for racial justice. The patches have caused some controversy among Saint Peter’s more conservative alumni as the team plays on the biggest stages of college sports.

“I tell you, it’s gonna be a Jesuit competition, Gonzaga and Saint Peter’s. And you know what, if it doesn’t happen somehow, it’s still epic, it’s still historic, and our team are still heroes.”

“I recently got a call from someone who asked me to make [the players] take it off their uniforms before we go to this next competition,” the president recounts. “And I said, ‘I’m not going to do that.’ We teach them to stand up for what they believe in, and this is what they believe in, and we’re going to support them. We teach our students to promote justice in our world, and for them this is their opportunity to communicate what they’ve experienced as Black men coming from an urban environment in this country.”

[Read next: Racial barriers, basketball and faith: The legacy of the 1963 Loyola Ramblers]

And the school’s support of students seeking social justice doesn’t stop there. Dr. Cornacchia attended a listening group held by L.G.B.T.Q. students to discuss their experience on campus. Though he admits it’s not an issue he had considered before, he left with a new perspective on the importance of gender neutral bathrooms and worked to install some on campus. Saint Peter’s also had one of the first centers for undocumented students, focused on helping them navigate unique challenges around funding and higher education; the university joined other New Jersey schools in lobbying for legislative change, which ultimately resulted in undocumented students being able to receive governmental financial aid.

Saint Peter’s has come a long way and isn’t done yet, both on the court and off. “We have come from being a sleepy little school a long time ago to a school that has raised more money in the last two decades than was raised in its entire history, done and built things that everyone said we couldn’t do, expanded programs no one had heard of,” says Dr. Cornacchia. “We’re a school to watch. We’re going places, we’re not stopping.”

How far does the Saint Peter’s president think the Peacocks can go? “I tell you, it’s gonna be a Jesuit competition, Gonzaga and Saint Peter’s." (Exhibit B of the unpredictability of March—Gonzaga, another team favored to win, lost to Arkansas shortly after this interview.)

But regardless of how the tournament plays out, Dr. Cornacchia is unfazed: “And you know what, if it doesn’t happen somehow, it’s still epic, it’s still historic, and our team are still heroes.”