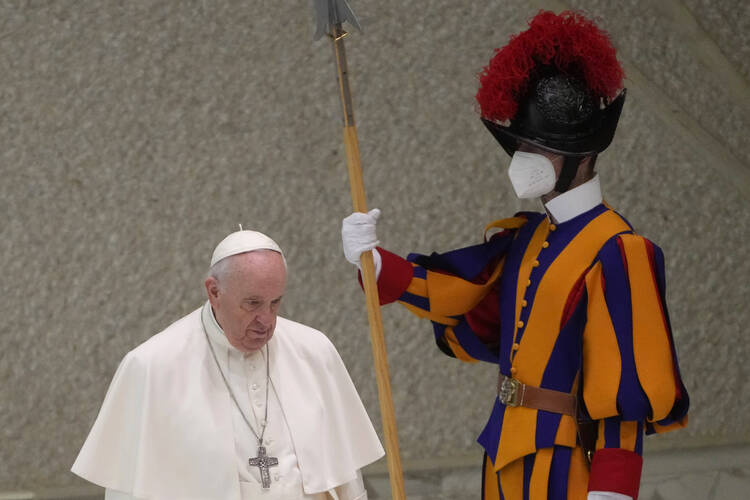 VATICAN CITY (AP) — The Vatican this week is hosting a three-day symposium on the Catholic priesthood amid renewed public attention on clergy sex abuse scandals and fresh research into the abuses of priestly power that harm both children and adults.

Pope Francis opens the symposium Thursday, and no fewer than a half-dozen Vatican cardinals are scheduled to either address the conference or preside over its sessions.

The high-level lineup suggests the topic has particular relevance as the Catholic hierarchy grapples with dwindling numbers of priests in Europe and the Americas and calls for a reform of everything from celibacy requirements to the role of women in the church.

But the sex abuse scandals are still making news, most recently with allegations that Pope Benedict XVI botched cases when he was an archbishop. While such revelations have been emerging for decades, new attention is focused on clergy who abuse their power to engage in sexual activity with adults, oftentimes abusing them spiritually in the process.

Pope Francis opens the symposium Thursday, and no fewer than a half-dozen Vatican cardinals are scheduled to either address the conference or preside over its sessions.

Recent developments have shed light on a problem the Vatican has long tried to ignore. These include the #MeToo movement, revelations of nuns abused by priests and the scandal over disgraced ex-Cardinal Theodore McCarrick, who was defrocked in 2019 after the Vatican determined he bedded adult seminarians as well as minors.

Archbishop Bernard Hebda of St. Paul and Minneapolis told his fellow bishops over a year ago that the McCarrick scandal “gives us the moment to speak about” the abuse of adults in the Church, and to do some “mature thinking” about how to address their trauma and the clergy who cause it.

The Catholic hierarchy has long insisted that these are consensual “affairs” between adults that are sinful for the priest but not criminal. But recent Catholic scholarship underscores that the behavior amounts to professional sexual misconduct, and that victims are traumatized both by the acts themselves and the church’s dismissive response.

Recently a team of German researchers published an anthology of 23 women who describe the spiritual and sexual abuse they suffered at the hands of priests, many of them current or former nuns but some laywomen as well.

The Catholic hierarchy has long insisted that consensual “affairs” between adults are sinful for the priest but not criminal. But recent Catholic scholarship underscores that it amounts to professional sexual misconduct.

The women described being trapped in toxic relationships with purportedly celibate, holy men, unable to break free because of the trauma bonds they formed with their abusers.

The stories were the subject of a conference this month organized by the Centre for Safeguarding Minors and Vulnerable Persons at the Catholic St. Paul University in Ottawa.

“There is a growing community, a network of academics, scholars and survivors,” said Doris Reisinger, a former nun and survivor of adult abuse who has become a leading researcher in the field.

Australian researcher Stephen De Weger recently published a thesis on the sexual abuse of adults which also examined the role the purportedly celibate priesthood has in the problem. He took as a starting point the estimate by the late Richard Sipe, a former priest and researcher, and confirmed by other studies, that only about 50% of priests abide by their vow of chastity, and that clerics are far more likely to engage in sexual misconduct with adults than children.

He noted that Australia’s Royal Commission investigation into institutional abuse found nearly 30,000 adults had been “sexually involved” with Australian Catholic clergy since the 1950s. Much of the scandal over the sex abuse of minors, De Weger argued, was due to the culture of secrecy created by religious superiors who didn’t take action against priestly pedophiles because they had their own sexual skeletons in the closet.

“They don’t want this stuff exposed,” De Weger said in a phone interview. “Why? Because the male, supposedly celibate clergy are the core central power base of the church. If you start exposing the fact, that like Sipe says, 50% have given up on chastity, that’s going to really rock their power to the core.”

While this week’s Vatican conference isn’t expected to tackle such problems, celibacy and the role of women in the church are on the official agenda.

One of the speakers, theologian Michelina Tenace, told a Vatican press conference that the abuse scandals were evidence the whole process of discerning priestly vocations and training seminarians must be rethought.

“One way to verify the call to the priesthood must be to never aspire to any power,” she said.