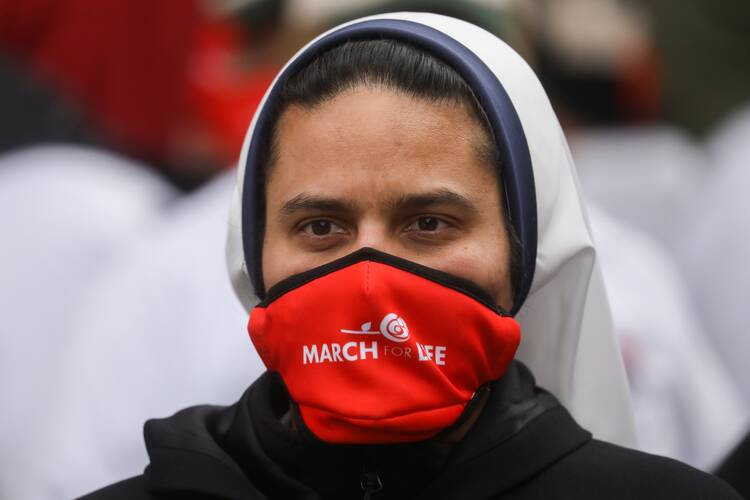 A woman religious is seen during the 48th Annual March for Life in Washington Jan. 29, 2021, amid the coronavirus pandemic. (CNS photo/Leah Mills, Reuters)

WASHINGTON (CNS) -- The 49th annual national March for Life -- with a rally on the National Mall and march to the Supreme Court Jan. 21 -- will go on as scheduled this year amid a surge in the omicron variant in the nation’s capital.

Outdoor events are not affected by the District of Columbia’s vaccine mandate for indoor gatherings, but participants should expect to wear face masks. Indoor events associated with the annual march will have to comply with city COVID-19 restrictions.

The national Pro-Life Summit, sponsored by Students for Life, is also scheduled to take place Jan. 22 at Washington’s Omni Shoreham Hotel. The event will feature former Vice President Mike Pence as its keynote speaker. Pence has been a frequent March for Life speaker, and in 2020 he introduced President Donald Trump at the event’s rally.

The 49th annual national March for Life will go on as scheduled this year amid a surge in the omicron variant in the nation’s capital.

The March for Life has canceled its three-day Pro-Life Expo and is combining two planned Capitol Hill 101 panel discussions Jan. 20 into a single event. The organization is still holding its annual Rose Dinner Gala.

Participants who are 12 and older attending the panel discussion or dinner will have to provide proof of receiving one COVID-19 vaccination by Jan. 15, or, if they are seeking a medical or religious exemption, they must have proof of a negative COVID-19 test within 24 hours of the event.

The Pro-Life summit is also requiring proof of COVID-19 vaccination following the city’s regulations. The summit, which in previous years has drawn more than 2,000 high school and college students, notes on its website that it is accepting vaccine exemptions “for a strongly (or sincerely) held religious belief ... in writing or orally” and it is also requiring masks at all events.

March for Life never projects attendance figures, but an informal survey by Catholic News Service of a few groups planning to attend this year’s march indicates that the turnout may approach pre-pandemic levels.

An informal survey by Catholic News Service of a few groups planning to attend this year’s march indicates that the turnout may approach pre-pandemic levels.

Last year’s march was turned into a virtual event due to the pandemic and the violence at the Capitol on Jan. 6. Only an invited group of 80, joined midway by more than 100 others, marched from the nearby Museum of the Bible to just behind the Supreme Court. It was the first outdoor event in Washington since the Capitol violence, with both the Capitol and Supreme Court surrounded by high fences.

In previous years, total attendance for the rally and march up Constitution Avenue was estimated to be as high as 100,000.

“We have nearly 250 students and faculty headed to D.C.,” said Ed Konieczka, assistant director of university ministry at the University of Mary in Bismarck, North Dakota. “That is five full buses -- our largest contingent since leading the march in 2017.”

Last year’s march was turned into a virtual event due to the pandemic and the violence at the Capitol on Jan. 6.

A similar number was estimated by organizers of the bus caravan for the Diocese of Fort Wayne-South Bend, Indiana.

However, the Diocese of Manchester, New Hampshire, decided in December 2021 that the COVID-19 risk was too high to sponsor a bus caravan.

Bevin Kennedy, diocesan secretary for communications, cited “the difficulty of monitoring and mitigating the COVID risk with a group of over 100 participants.”

The march is held annually on a date nearest the anniversary of the Supreme Court’s Roe v. Wade decision, which legalized abortion.

There is considerable anticipation that this year’s march could be the last one with the Roe v. Wade decision hanging in the balance.

The first march was held Jan. 22, 1974, organized by Nellie Gray, a government lawyer, and the Knights of Columbus. The idea was to form a “circle of life” around the Capitol and the Supreme Court. Jeanne Mancini assumed leadership of the March for Life Education and Defense Fund after Gray died in 2012.

This year’s theme is “Equality Begins in the Womb.” The rally is scheduled to begin at 11 a.m. with a performance by singer Matthew West. The march starts at 1:15 p.m. after the political speeches are completed.

There is considerable anticipation that this year’s march could be the last one with the Roe decision hanging in the balance.

Later this year, the Supreme Court will announce its decision in the Dobbs v. Jackson Women’s Health Organization, an appeal by Mississippi to remove a lower court’s injunction on its law banning most abortions after the 15th week of pregnancy.

If the court rules in favor of the state law, it will effectively overturn Roe v. Wade and send abortion laws back to the states.