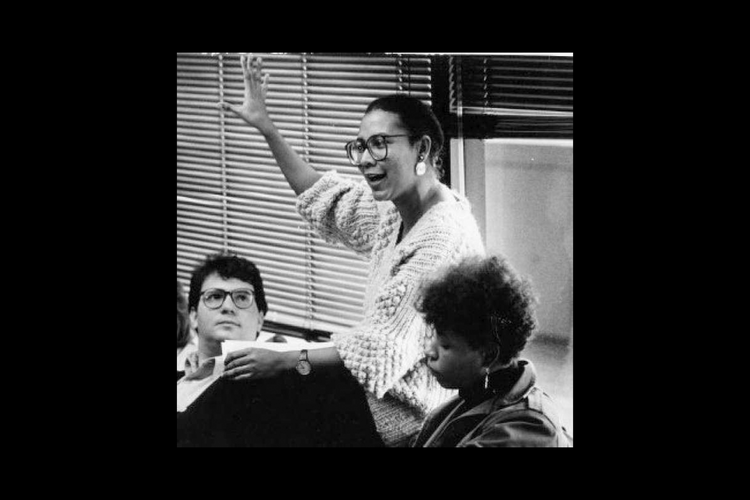 I was saddened to learn of the death of bell hooks, the feminist author and poet, and stunned to learn that she was only 69. Way back in the early 1990s, during my philosophy studies as a young Jesuit, I had read her clarion call of a book, Ain’t I a Woman? Black Women and Feminism, and had assumed all these years that she was much older.

But no, bell hooks (she always lowercased her name) wrote the book in her late 20s. To me, it seemed the work of a person with many more years of experience. That book, which focuses on the complex interplay of racism, sexism and class, shook me up, challenged me and opened my eyes in ways that they needed to be opened.

The philosophy courses that Jesuits took at Loyola University Chicago in the 1990s as part of our formation were a mix of undergraduate and graduate courses. Many of the young Jesuits had little philosophy background, which meant that many of the courses were taken with students who were much younger. I was 29 years old with zero philosophy in my past, and so was just as often in classes with college seniors as with grad students. It was a rigorous series of courses, presented systematically: moving from ancient (Plato and Aristotle), to medieval (Anselm and Aquinas among them) to classical modern (Descartes, Kant, Hume, Leibniz) and finally to more recent figures like Nietzsche, Sartre, Heidegger, Husserl and Rawls.

I was saddened to learn of the death of bell hooks, the feminist author and poet, and stunned to learn that she was only 69.

But we had room for electives.

“Feminist Philosophy” sounded interesting, and the professor had a great reputation. Besides, what did I know about feminism?

The course, in a word, changed me. As someone who grew up in the 1960s, 70s and 80s, I was aware of “women’s liberation,” knew who Gloria Steinem was and had seen copies of Ms. Magazine on the newsstands. If you had asked me about the Equal Rights Amendment, I would have said that I was in favor of it but couldn’t have told you much more than that.

The notion that feminism, however, represented a coherent system of beliefs and practices and had progressed historically, with authors commenting on earlier beliefs as in any philosophical system, and that there were different schools of feminism (not to mention different “waves”), was beyond me.

The course changed that. It was like being on the receiving end of an academic firehose as we read, in quick succession, Mary Wollstonecraft’s A Vindication of the Rights of Women, writings by Susan B. Anthony, Betty Friedan’s The Feminine Mystique, Simone de Beauvoir’s The Second Sex and writings and essays by Andrea Dworkin and other more recent authors.

To use some Kantian language, bell hooks awoke me from some “dogmatic slumber.” Or maybe patriarchal slumber.

But it was bell hooks’s book Ain’t I a Woman? (her title is taken from a speech by Sojourner Truth, which we also read) that spoke to me most. How incredible, I thought as I read at my desk in my Jesuit community, that I had never given one second of thought to the possibility that racism, sexism and class could be connected; that African American women and working-class women were often sidelined by other women in the feminist movement; and how unique the struggles of Black women in the United States were. To use some Kantian language, bell hooks awoke me from some “dogmatic slumber.” Or maybe patriarchal slumber.

I found her voice—bold, smart, unapologetic—captivating. Until then I had never read anyone like her. Here she is in Ain’t I a Woman?:

It is obvious that many women have appropriated feminism to serve their own ends, especially those white women who have been at the forefront of the movement; but rather than resigning myself to this appropriation I choose to re-appropriate the term ‘feminism,’ to focus on the fact that to be ‘feminist’ in any authentic sense of the term is to want for all people, female and male, liberation from sexist role patterns, domination, and oppression.

Reading authors like bell hooks taught me to be alert not only for instances of sexism and racism but for patterns of it. It was the first course that helped me understand, in a real way, a concept at the foundation of much of Catholic social teaching: “social sin,” not just individual sinful actions but sinful structures baked into society. Later, such thinking would help me understand homophobia and transphobia.

Reading authors like bell hooks taught me to be alert not only for instances of sexism and racism but for patterns of it.

The course had another effect, perhaps unintended (then again, perhaps not): It opened my eyes to how many church leaders reject an absurdly stereotyped version of feminism and even demonize feminism, without much understanding what feminism is. As I recall, we didn’t discuss the church in class, but that reality soon became painfully obvious.

After the course, I saw how often church leaders derided feminist ideas and efforts to help women as “radical feminism,” when in fact that is a specific type of feminism. I saw how easily concepts like “complementarity” (in which men and women are supposed to have “complementary” roles) were sometimes used as fig leaves for sexism and misogyny. Mainly, I saw how the whole idea of feminism is often turned into a stereotype in the Catholic Church.

I cannot pretend to be an expert in feminism, feminist thought, feminist philosophy or feminist history. A good deal of what I read 30 years ago I have forgotten. But what I have not forgotten is the impact of that course and especially of bell hooks’s writing. Thanks to her and others, I see the world through different eyes.