Lies can cost lives. Our deceitful and dishonest political culture needs to change. 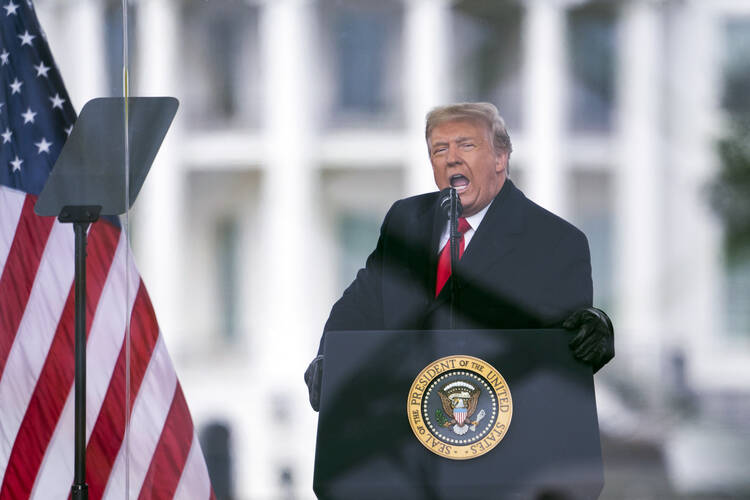 Donald Trump brought deception to a new level, in part through his ability to communicate directly with millions of Americans by way of social media. In this photo, then-President Trump speaks during a rally protesting the Electoral College certification of Joe Biden as president in Washington, D.C., on Jan 6, 2021. (AP Photo/Evan Vucci, File)

We are living in a period in history that demands clear, honest, scientifically guided responses to existential threats like the Covid-19 pandemic and climate change. But as great as that need is, we see so many instances of elected officials and policymakers failing to adequately address the great challenges of our times. We see science providing us with answers and approaches, but too often these lifelines are brushed aside or ignored. Too frequently, our elected officials fail us, elevating artful pandering and dishonesty over real solutions.

I have had the honor to serve in the U.S. Congress and then become a chancellor—and now president—of my alma mater, the University of Massachusetts. In government and in higher education, I have been guided by Robert F. Kennedy’s belief that the purpose of life is to contribute in a meaningful way to making things better in the world. Today, I believe it is more important than ever that we embrace policies and follow paths that we know to be in the public interest and to be fact-based. There is too much at stake to do otherwise.

We see science providing us with answers and approaches, but too often these lifelines are brushed aside or ignored.

From our earliest days, we are told about the importance of truth. The Bible tells us, “You will know the truth, and the truth will set you free,” and the Prophet Muhammad urges us to “speak the truth, even when it is bitter.” Desmond Tutu, winner of the Nobel Peace Prize, observed, “This is a moral universe and you’ve got to take account of the fact that truth and lies and goodness and evil are things that matter.” Finally, the preamble of one of America’s foundational documents, the Declaration of Independence, asserts the existence of essential, “self-evident” truths.

Humans have never fully embraced the concept of telling the truth, which can be painful, inconvenient and embarrassing. In her book Democracy and Truth: A Short History, Sophia Rosenfeld, a professor of history at the University of Pennsylvania, notes that the relationship between democracy and the truth has always been uneasy. But she also writes that the “truth crisis” we see today transcends anything that has come before. There is a new willingness to stand truth on its head and to wield the weapon of deception whenever it is convenient to do so.

There is a new willingness to stand truth on its head and to wield the weapon of deception whenever it is convenient to do so.

Let us just say the name: Donald Trump. In any discussion about a post-truth world and a new willingness to embrace deceit as a modus operandi, our former president is the proverbial 800-pound gorilla. According to The Washington Post’s Fact Checker team, Mr. Trump spoke 30,573 untruths during his presidency—an average of 21 falsehoods a day. While Mr. Trump’s deceptions came in all shapes and sizes, he will especially be remembered for his assertion that the 2020 election was stolen.

However large Mr. Trump looms, he may be pained to hear that it is not all about him. As Andrew Higgins noted earlier this year in The New York Times, “Lying as a political tool is hardly new.” And the political right does not have a monopoly on deception. Glenn Kessler, who has led the Fact Checker team since 2011, told one interviewer that “Both political parties will manipulate the truth if they think it gives them a political advantage.”

Certainly, other American presidents have lied. Lyndon Johnson spread so much disinformation about the Vietnam War that journalists invented a new term, saying that the president had a “credibility gap.” Richard Nixon assured the nation that no member of his administration was connected to the Watergate break-in. And Dwight D. Eisenhower signed off on a false statement to the public that a plane shot down over the Soviet Union in 1960 was conducting “weather research.” The United States was ultimately forced to acknowledge that the U-2 plane was on an espionage mission, and Eisenhower later called the initial lie his “greatest regret.”

But Donald Trump brought deception to a new level, in part through his ability to communicate directly with millions of Americans by way of social media. This ability to wage verbal warfare without concern for taste, veracity or the dignity of the presidency made him a potent political force. At the same time, the diminished size and impact of the news media in the digital age has made it more difficult for it to play its traditional role as a watchdog.

How Lies Can Cost Lives

Why is it wrong to lie? Because it offends our sensibilities? Because our parents and teachers told us not to?

Those are good reasons to steer clear of deception, but lying on a grand scale by public leaders is even more alarming because it has the power to pervert public policy and even end lives. This is the point I made when I took on the tobacco industry as a member of Congress in the 1990s.

Smoking was and continues to be the leading cause of preventable death, claiming nearly half a million lives in the United States annually. Worldwide, the number of smokers has increased to 1.1 billion, with tobacco smoking causing nearly eight million deaths per year, or one in five deaths among males.

Lying on a grand scale by public leaders has the power to pervert public policy and even end lives.

In confronting the tobacco industry, I met an opponent that was willing to spin fairy tales about its product and the risks associated with it. The tobacco industry’s deceptions were blatant, with three industry C.E.O.s telling Congress in 1994 that they did not believe nicotine to be addictive. This testimony was astounding because the companies by that time thoroughly understood the many health risks that tobacco posed. Thirty years earlier, a lawyer at the Brown & Williamson Tobacco Corp. had plainly stated in a confidential memo, “We are...in the business of selling nicotine, an addictive drug.”

In 2006, thanks in part to our efforts in Congress, a federal judge imposed numerous sanctions on the tobacco industry. But the industry’s disinformation campaign took a massive toll. Public understanding was muddied, regulation was delayed, and many people got sick or died because of the industry’s desperate and deceitful tactics. Some say that “the truth hurts,” but lying kills.

We see deception and dishonesty in many areas, not just in politics and government. For example, while the antivaccine movement includes people who are driven by their earnestly held beliefs, it has also spawned a multibillion-dollar “anti-vax” industry that includes many who are not true believers and are in it strictly for the money to be gained from selling everything from books and videos to alternative medicines and “miracle cures.”

The Center for Countering Digital Hate recently identified what it called the “Disinformation Dozen,” a list of 12 people responsible for creating up to 70 percent of all spurious antivaccine messaging on social media. The person who tops the list has woven deception into a $100 million personal empire.

So how do we stand up for truth? Some good ideas have emerged in recent years.

Ultimately, we need leaders who will lead. We need leaders who have the moral fiber to police themselves and others, and who are able to fashion solutions for social and economic problems that can create fertile ground for demagogues.

Lies don’t die with each passing news cycle. They are like poisoned fruit littering the landscape. Earlier this year, we all saw the halls of Congress trampled and democracy attacked. Without question, the outrageous actions we saw on that infamous day were triggered by people who were willing to weaponize falsehoods and deceit.

It is up to all of us to stand up to those who would place lives and democracy at risk. We still have time, but the clock is ticking. 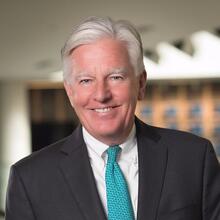 Marty Meehan is president of the University of Massachusetts system. This essay has been adapted from his remarks to “Truth and Post-Truth in Communication, Media and Society,” a conference conducted by the Pontifical Academy of Social Sciences and held at the Vatican on Sept. 13 and 14.

@MartyMeehan
Show Comments ()
Join the conversation: Login or create an account
Before you can comment, you need to update your profile to include your first and last name, as required in our comments policy. Then reload this page and you'll be set up for commenting. Update your profile