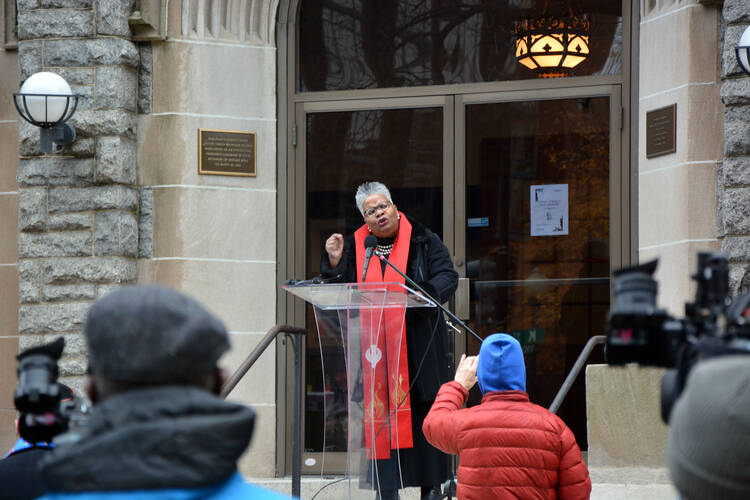 (RNS) — A former campus minister and university chaplain at American University in Washington, D.C., has surrendered his clergy credentials after reportedly admitting to allegations of clergy sexual misconduct.

On Wednesday (Aug. 18), Bishop LaTrelle Easterling shared the allegations against Mark Schaefer, a former ordained elder in the United Methodist Church, in an email to members of the denomination’s Baltimore-Washington Conference.

“Clergy misconduct is a violation of trust. It also violates the inherent responsibility we as clergy carry for the vulnerable individuals God has placed in our care. There is no excuse for this kind of betrayal,” Easterling said in the email.

“I take all allegations of misconduct seriously and seek, through our administrative and judicial processes, to impose accountability, bring healing and achieve resolution in each circumstance.”

In 2019, the bishop said, she first received a formal complaint against Schaefer by a former American University student, who accused the former chaplain of sexual misconduct during the years 2002 and 2003.

“Clergy misconduct is a violation of trust. It also violates the inherent responsibility we as clergy carry for the vulnerable individuals God has placed in our care."

The Baltimore-Washington Conference initiated the process for a “just resolution” laid out in the United Methodist Church’s Book of Discipline, Easterling said.

Everyone involved, including the complainant, agreed to the terms of the resolution, the bishop said. It required Schaefer to disclose his misconduct to American University, undergo six months of psychological assessment and counseling and complete three years of probation with the understanding that any additional violations could result in surrendering his credentials, she added.

American University, which was founded by one of the United Methodist Church’s predecessor denominations, terminated Schaefer’s employment as a chaplain in December 2019, according to the bishop.

In 2020, two more formal complaints were filed against Schaefer by former students at American University, alleging sexual misconduct in 2009 and in 2015, she said.

“There is no excuse for this kind of betrayal,” Easterling said.

Schaefer surrendered his clergy credentials after the second complaint, admitting to accusations of clergy sexual misconduct, according to the bishop. The third complaint was dismissed, she said, as he no longer was employed or credentialed by the Baltimore-Washington Conference.

He was then hired as director of Christian education and communications at Potomac United Methodist Church in Potomac, Maryland. The church did not respond to a request for comment by Religion News Service.

In a statement to RNS after Easterling’s email, the Baltimore-Washington Conference said, “Schaefer presently works for Potomac United Methodist Church in a lay (non-clergy) position; however, local churches have the authority to make their own hiring decisions which are not subject to approval by the Conference and are not under their supervision.”

Earlier this year, the first complainant, from American University, filed a civil lawsuit against Schaefer, the Baltimore-Washington Conference and American University in the Superior Court for the District of Columbia, according to Easterling’s email.

In the lawsuit, the plaintiff alleges that Schaefer began “grooming” her in 2002 while she was a freshman after she came to him to learn more about the United Methodist Church’s stance toward LGBTQ people. She had been raised Catholic and, as a lesbian, was looking for “a more inclusive faith.”

After she joined the campus ministry, he allegedly began singling her out for attention, according to the lawsuit. On one occasion, he allegedly brought the plaintiff to his residence, where he allegedly kissed her without her permission, touched her genitals and forced her into oral sex.

On other occasions, after student leaders in the campus ministry allegedly already had reported the misconduct to their district superintendent in the Baltimore-Washington Conference, Schaefer allegedly touched the plaintiff’s genitals and forced her to touch his while in his car and attempted to initiate phone sex.

The suit also alleges American University and the Baltimore-Washington Conference are liable for the actions and inactions of their employees.

The university said in an email to RNS that it “strictly prohibits sexual harassment and discrimination” and has taken steps to “streamline and enhance” its discrimination complaint process.

"I apologize on behalf of the Church for the instances when we have not protected others from harm or have caused harm by our actions or inactions.”

It did not comment directly on the allegations against Schaefer, noting: “The university generally handles matters involving alleged misconduct in a confidential manner. This approach supports members of our community involved in these matters and allows for the successful implementation of our policies.”

Bennett LoCicero & Liu LLP, which is representing Schaefer, told RNS it had no comment at this time.

“We do not condone sexual misconduct, sexual harassment, or abuse of any kind,” Easterling said in her email.

“We have systems in place to prevent misconduct, and we lament when those preventative measures are not enough. I apologize on behalf of the Church for the instances when we have not protected others from harm or have caused harm by our actions or inactions.”

Emily McFarlan Miller - Religion News Service
Show Comments ()
Join the conversation: Login or create an account
Before you can comment, you need to update your profile to include your first and last name, as required in our comments policy. Then reload this page and you'll be set up for commenting. Update your profile