‘The Holy See fears the collapse of the country’: Pope Francis to host a day of prayer for Lebanon 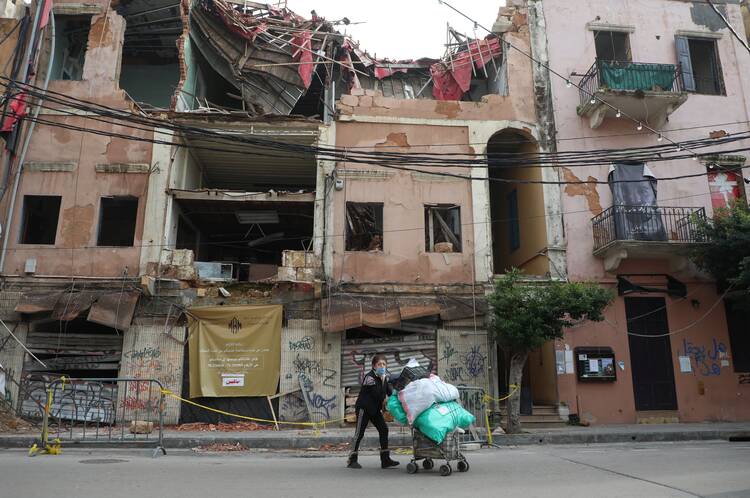 A woman wearing a protective masks pushes a cart past damaged buildings in Beirut Jan. 26, 2021, during the COVID-19 pandemic. More than half of the population of Lebanon lives in poverty. (CNS photo/Mohamed Azakir, Reuters)

Pope Francis will join the main Christian religious leaders from Lebanon on July 1 for a day of reflection and prayer in Rome for this country of some five million people. Lebanon is facing a political, financial and humanitarian crisis of the utmost gravity and has been without a government for many months.

“The Holy See fears the collapse of the country,” Archbishop Paul Gallagher, the Vatican’s secretary for relations with states, stated frankly at a press conference in the Vatican on June 25, detailing the event. Archbishop Gallagher said the Holy See feared that the collapse of Lebanon, the last democracy in the Arab world, would have disastrous consequences for the Christians in that country.

There has already been a stark exodus of Christians, especially young people, from the country, he said. He made clear that if the exodus were to continue, “it risks destroying the internal balance” in Lebanon.

According to the country’s power-sharing system, the Lebanese president has to be a Maronite Christian, the prime minister a Sunni Muslim and the speaker of the parliament a Shiite Muslim. Seats in the cabinet and parliament are divided equally between Muslims and Christians. No Christian political leader from Lebanon has been invited to the day of reflection.

“The Holy See fears the collapse of the country,” Archbishop Paul Gallagher, the Vatican’s secretary for relations with states, stated frankly.

Archbishop Gallagher recalled that Pope Francis had sent Cardinal Pietro Parolin, the Vatican secretary of state, to visit Lebanon after an explosion in the port of Beirut that brought such disaster to the city. He said the pope had also sent assistance to Lebanon’s Catholic schools and arranged for the Vatican, together with the European Union bishops’ committee, to send pharmaceutical help in the aftermath of that devastating accident. Since then, heads of state who have visited the Vatican have been asked to see what their country could do to help Lebanon.

The pope first announced this prayer event on May 30, accepting a suggestion that came from the Christian religious leaders of the Land of the Cedars, where Christians and Muslims have lived side by side for centuries.

At a press conference on June 25, Cardinal Leonardo Sandri, prefect of the Congregation of the Oriental Churches, recalled that over the past half century popes John Paul II, Benedict XVI and now Francis have given constant attention to this land, which they have described as “a message” to the world about how Christians and Muslims can live together in peace. He recalled how St. John Paul II called a special synod of bishops for Lebanon on June 12, 1991, when the situation was truly “dramatic” in the country after its long civil war and invited the Catholics of Lebanon to a journey of prayer, penance and conversion.

That synod took place in 1995. The Polish pope visited the country in May 1997 and presented his post-synodal exhortation. Benedict XVI went there, too, in September 2012, after the special synod for the Middle East.

“Thirty years ago, the situation was dramatic,” but the accounts from that period “seem like a chronicle of our day,” Cardinal Sandri remarked, explaining the great need for this day of reflection and prayer, when the pope will greet the Christian religious leaders gathered in Santa Marta—the Vatican guesthouse where the pope lives and where they too will reside—followed by a “walk together” to St. Peter’s Basilica for the opening prayer. Once inside the basilica, Cardinal Sandri said, the church leaders will go down to the Confessional of St. Peter, under the main altar, and there each one will place a candle asking for the saint’s intercession for that country.

The cardinal explained that the reflection will involve the pope and Christian leaders sitting together in the Vatican’s Clementine Hall, where they will share their personal insights at three separate sessions behind closed doors in the morning and afternoon—each of which will be introduced by a keynote speaker. The papal nuncio to Lebanon, Archbishop Joseph Spiteri, will act as moderator at these sessions. Pope Francis will speak at the end of the day, and there will be much interest in what he will say then.

Popes John Paul II, Benedict XVI and Francis have given constant attention to Lebanon, which they describe as “a message” to the world about how Christians and Muslims can live together in peace.

The cardinal listed the Catholic leaders who would be at the July 1 event. They include the Maronite patriarch, Cardinal Bechara Boutros Rai; the Syro-Catholic patriarch, Ignace Youssif III Younan; the Chaldean bishop Michel Kassarji; and the Latin vicar-apostolic, Bishop César Essayan.

Bishop Brian Farrell, the secretary of the Pontifical Council for Promoting Christian Unity, told journalists at the press conference that “almost all the Oriental Orthodox and Catholic churches are present [in Lebanon] with their great diversity of rites and traditions, as are the different ecclesial communities born from the Reformation,” and there is an intertwining of collaboration and living together, as well as much intermarriage.

He listed the non-Catholic churches that would be present at the event: the Greek-Orthodox Church of the Patriarchate of Antioch, of the Byzantine tradition, led by Patriarch Youhanna X Yazigi; the Armenian Catholicosate of Cilicia, led by the Catholicos Aram I; the Syro-orthodox church, led by Patriarch Ignatius Aphrem II; and the Supreme Council of the Evangelical Community in Syria and Lebanon.

Archbishop Gallagher said he expected they would all have a much clearer picture of the situation in Lebanon and the possible paths ahead by the end of the day of reflection.

Archbishop Gallagher recalled that Pope Francis desires very much to visit the country and had made clear to the prime minister-designate, Saad Hariri, when they met last April, that he would go to Lebanon once they had formed a government. At that time he encouraged the political forces to collaborate for the good of the whole country.

Asked by an American journalist why the Vatican is giving so much attention to Lebanon but not to Hong Kong, Archbishop Gallagher replied: “Hong Kong is a cause of concern to the Holy See. But whereas the Lebanon is a place where we perceive we can make a contribution, we do not see this in Hong Kong. We have yet to be convinced that we can make any difference whatsoever in Hong Kong.”