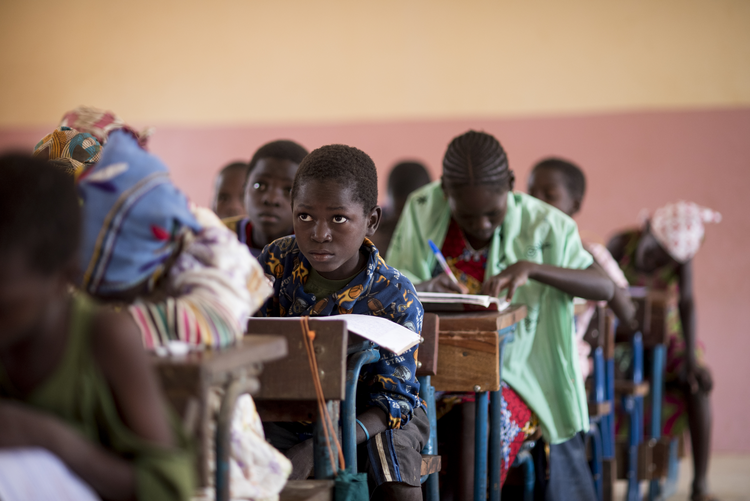 Students at Diarrabougou School work in a classroom in Mali. The students will receive a free school lunch each day through Catholic Relief Services' Jigiya program, also known as Food for Education. the bishops of five West African nations committed to a renewed effort to seek peace in the Sahel region as growing violence has disrupted daily life and uprooted entire communities. (CNS photo/Michael Stulman, CRS)

CAPE TOWN, South Africa (CNS) -- The rise in violence in West Africa's Sahel region is a result of unequal access to wealth rather than clashes of religious beliefs, a new report from Catholic Relief Services said.

"While the crisis may be painted by some as religious or ethnic in nature, it's actually a result of perceived inequality and a growing discontent with government," CRS said in a Sept. 30 press statement.

"The daily atrocities we're seeing reflect an extremely complex reality that is rooted in despair," said Patrick Williams, CRS program manager for the Sahel Peace Initiative. "We're talking about communities where the number of unemployed people far exceeds the number of those able to earn a meaningful living," he said.

The initiative is a multicountry Catholic response to the crisis that focuses on Mali, Burkina Faso and Niger, which are at the epicenter of the violence, but also includes neighboring Ivory Coast and Ghana.

Although Catholics comprise a small percentage of the total population in Sahel, the church is respected by the population "regardless of their faith and is seen as a neutral, objective and nonpolitical actor across the region," said the CRS report, titled "Steps Towards Peace."

Lack of accountable political leadership "has eroded faith in democracy and civic engagement," the report said.

Young people from traditional pastoralist, or sheep and cattle farming, backgrounds are among the poorest in the region and "many emigrate or join violent groups as an escape from poverty and injustice," the report said.

"Whether one is a Muslim, Christian, Catholic, Protestant or of a traditional African belief, terrorism has spared no one" and causes everyone loss of lives, livelihoods, homes and freedom, Bishop Laurent Dabire of Dori, Burkina Faso, president of the bishops' conference of Burkina Faso and Niger, said in the statement.

"Community and religious leaders -- both Muslim and Christian -- have stood up for unity and peaceful resistance and as a result are the targets of assassinations in attempts to undermine their influence," the statement said.

The CRS report is based on an April study that included conversations with farmers, herders, local militias and religious and traditional leaders in Burkina Faso, Mali and Niger.

Most people in Sahel are poor and lack formal education and skills "that could enable them to ascend social and economic ladders," the report said.

Peace efforts should "target populations most vulnerable to violence" and ensure that "development resources are directed toward their safety ... and their right to be protected from ... predatory governments and extremists," it said.

CRS called for investment in peacebuilding "and for more involvement of women, youth and local leaders as part of national and regional plans to resolve the crisis."

The "scale and scope of violence surpass the capacity of government and local leaders to coordinate a unified and effective response," the report said.

Provide feedback on this article
Join the conversation: Login or create an account
Before you can comment, you need to update your profile to include your first and last name, as required in our comments policy. Then reload this page and you'll be set up for commenting. Update your profile
More: Africa / Terrorism