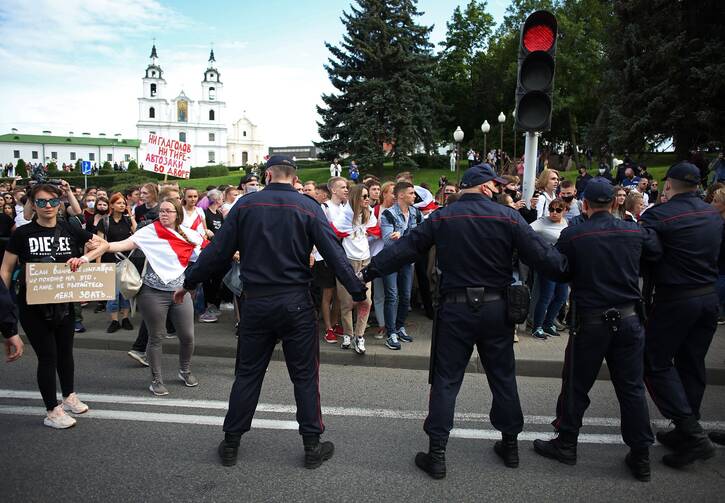 WARSAW, Poland (CNS) — Archbishop Tadeusz Kondrusiewicz said he had obtained legal advice about being barred from reentering Belarus and counted on Vatican help in correcting the illegal action against him.

Archbishop Kondrusiewicz told Polish Radio in Bialystok Sept. 2 that he had often traveled abroad, with required permits, from his Minsk-Mohilev Archdiocese to attend religious events and conferences and had always been allowed back.

The church leader said Belarusian law “stated clearly” that a citizen could not be barred from entering his own country, but added that he had received no reply when he wrote Sept. 1 to the border service in Minsk, quoting the law and requesting an explanation.

“The problem lies not just in my exclusion, but also in the fact I’m now unable to attend my schedule of services — people are naturally asking how this could have happened,” he said.

A source from the Vatican nunciature in Minsk told Catholic News Service Sept. 3 that the arrival of a new nuncio, Archbishop Ante Jozic, appointed in 2019, had been delayed by the coronavirus, ruling out any official statement on Archbishop Kondrusiewicz’s plight.

“We’re not necessarily expecting the Vatican to say something, but we are expecting it to do something,” the source said.

“As yet, nothing is clear, and we are waiting to see what happens. But we obviously hope the archbishop will be back in his diocese soon.”

“These and similar actions by individual authorities do not contribute to building constructive relations between the state and Catholic Church, nor serve to relieve tensions and overcoming the deep divisions in society,” they said in a Sept. 2 statement.

Archbishop Kondrusiewicz, a Belarusian citizen appointed to Minsk in 2007 after serving as a bishop in Russia, was barred from crossing the border the day after his pastoral letter was read at churches. The letter warned of civil war, as security forces confronted demonstrators protesting the declared Aug. 9 election of President Alexander Lukashenko.

The announcement of the election results led to massive street protests in multiple cities. Church leaders confirmed Catholic clergy and laypeople had been beaten and jailed during the protests.

On Aug. 26, police dispersed protesters in Minsk’s Independence Square, and about 100 of them took refuge in nearby Sts. Simon and Helena Church. Police blockaded the entrances for several hours and, after opening the doors, arrested several people who left the church.

The Belarus church’s website said Sts. Simon and Helena would be the site of a Sept. 5 Mass for “those killed and imprisoned during peaceful rallies.”