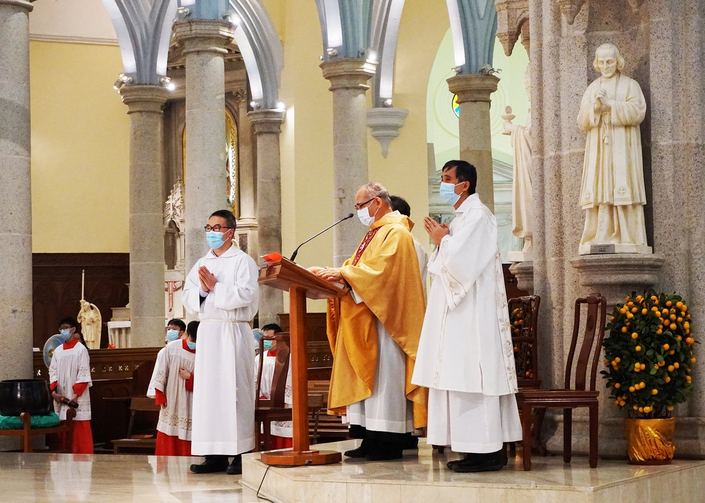 Ucanews.com reported the letter, written in the form of instructions to priests on homilies, said the purpose of a sermon is not to convey personal or opinion on social or political issues “but rather to convey God’s message and to help the faithful gain a deeper understanding of the Christian life.”

Cardinal Tong said priests and deacons in the diocese should not resort to “slanderous and offensive statements which insinuate or incite hatred, cause social unrest, are contrary to the Christian spirit and are never appropriate in the liturgy,” ucanews.com reported.

“At this critical time, our faithful would like to hear some comforting, constructive and encouraging words from the priest in the liturgy,” he said.

But this can “never be achieved through the use of insulting and provocative expressions,” he said and asked priests to help the faithful “leave the house of the Lord in peace and illumination, rather than confusion and disorientation.”

Hong Kong has witnessed massive arrests and a crackdown against pro-democracy activists since July 1, when the security law came into force in the city of some 7.5 million people.

Many Catholics, including Cardinal Joseph Zen Ze-kiun, the retired bishop of Hong Kong, have supported the pro-democracy movement and criticized what they called the Chinese Communist Party’s moves to smoother civic freedom.

Several diocesan priests approached by UCA News for a response to Cardinal Tong’s letter refused to talk, saying they did not want to be quoted.

Whether Trump or Biden wins, the church will keep losing. Where does that leave Christian voters?
Bill McCormick, S.J.

Some said the pastoral letter was influenced by the Beijing-controlled city administration, and the diocese also does not want to see itself confronting the government.

Two days after the letter was sent, the diocese intervened to stop a diocesan organization’s plan for a campaign and prayer to support the pro-democracy movement.

The Justice and Peace Commission of Hong Kong Diocese asked for donations to buy advertisements to support a pro-democracy newspaper. The ads planned to feature a prayer for the preservation of democracy in the city.

But on Aug. 29, it canceled the plan. In a letter, it said the diocese does “not support the method of fundraising and the content of the prayer.”

In early August, the diocese sent a letter to all its schools asking them to “promote proper recognition” of the security law. It also warned teachers and the management against “politicization” and the “unilateral promotion of political messages, positions or views.”

Hong Kong has about 900,000 practicing Christians, about 12% of the population. Some 500,000 are Catholics, while the rest belong to Protestant denominations.

Last year, while the Hong Kong administration considered the security law, the Protestant Church asked its pastors to remove their names from public statements opposing the bill.