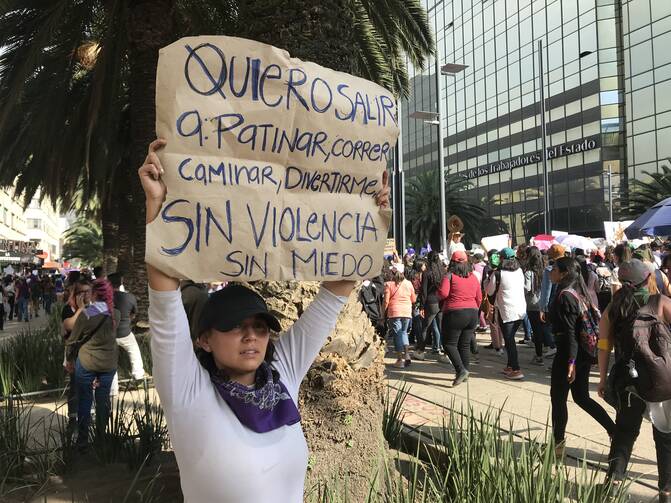 Joanely Martinez displays a sign—"I want to go out...to run, to walk, to enjoy myself without violence, without fear"—during the women's march on March 8, 2020, in Mexico City. She said the government "does nothing" to protect women, who are demanding the authorities do more to stop the murder of women and girls. (CNS photo/David Agren)

During the early days of the coronavirus pandemic in Mexico, Jackie Campbell, a human rights activist and spokesperson for the Diocese of Saltillo in northern Mexico, was forced to deal with a lesser-reported aspect of the global lockdown.

“I tried to find shelters for victims of domestic violence, but it was very difficult,” she told America. “People were panicking. The shelters were closing their doors, it was very hard to find help.”

She sighed. “It’s a constant struggle. It wears you out, and even more so during the pandemic.”

Mexico has long been plagued by often brutal violence against women and children. According to the National Human Rights Commission, an autonomous federal watchdog, just under 11 women are killed on average each day in Mexico because of gender-based violence. The authorities also report thousands of emergency calls concerning women and children suffering other physical violence, most often at home, perpetrated by partners and family members. Many more cases go unreported, while the vast majority of cases of domestic and gender violence go unpunished.

But as the coronavirus pandemic hit Mexico, forcing federal and state authorities to ban social gatherings, close down businesses and urge people to stay at home to prevent the disease from spreading, women’s rights groups raised the alarm about a sharp increase in the already crisis levels of domestic and gender violence. According to the federal Interior Secretariat, the was an almost 50 percent increase in emergency distress calls reporting domestic violence in the first six months of 2020.

Mexico has long been plagued by often brutal violence against women and children. Just under 11 women are killed on average each day in Mexico because of gender-based violence.

“We’re facing a double epidemic: the virus and domestic violence. One is new, the other has always been here,” Ms. Campbell said. “All you need to do is look at the numbers. The network of shelters in the country reported an 80 percent increase in the number of distress calls.”

According to the federal government, authorities received more than 130,000 calls related to domestic violence during the first six months of 2020. This is a staggering 46 percent increase compared with the same period last year, Secretary of the Interior Olga Sánchez Cordero told Mexican media.

“The situation is very clear...sadly, the violence mostly occurs at home, with family members, partners and husbands as the principal attackers,” said Mariana Bello, one of the founders of Gobernanza MX, a civil society group focused on domestic and gender violence in the southern Mexican state of Quintana Roo. “It’s a cauldron waiting to explode, fueled by the stress and uncertainty about the virus and the loss of jobs, forcing people to stay at home.”

Quintana Roo, a coastal state where beachfront cities such as Cancún draw millions of tourists each year, is one of the states where the spike in violence has been particularly severe. According to statistics provided to America by Gobernanza MX, the state ranked first nationwide in the number of reported cases of domestic violence per capita in the first months of 2020.

The Diocese of Cancún-Chetumal announced in May that it planned to open a temporary shelter for victims of domestic violence. Several attempts by America to reach the diocese for comment were unsuccessful.

In Mexico “we’re facing a double epidemic: the virus and domestic violence. One is new, the other has always been here.”

“The pandemic has revealed how poorly prepared we have been to address the problem,” said Mónica Franco, a criminologist associated with Gobernanza MX. “There’s insecurity about public health, people who lose their jobs, an increase in alcohol abuse,” she said. “Women are affected in multiple ways. They’re often the first to lose their job, they have to take care of the children, and they face the stress of being locked up with their aggressor.“

She adds that authorities are ill-prepared and often unwilling to adequately process reports of domestic violence. In recent years, deadly violence has reached record heights in Mexico, fueled by the ongoing war between criminal gangs and the state. More than 90 percent of crimes in Mexico go unreported and unpunished.

“The vast majority of victims of domestic violence are too scared to even report it,” Ms. Franco said.

Even as rights groups sounded the alarm about rising domestic and gender violence at the onset of the coronavirus pandemic, Mexican President Andrés Manuel López Obrador appeared to have little interest in addressing the issue. On several occasions, the president downplayed and even dismissed the alarming statistics on violence that his own government provided.

On May 7, during the so-called mañanera, his daily morning press conference at the National Palace in Mexico City, Mr. López Obrador said that his government “had not seen an increase” in the number of distress calls to emergency services.

“Yes, there is machismo, but there’s also family fraternity, which isn’t seen in other places, I say so with all due respect,” he said. “So if we want to measure domestic violence in Mexico with the same parameters from other parts of the world, it does not apply at all.”

“The vast majority of victims of domestic violence in Mexico are too scared to even report it.”

His comments were widely criticized by human and women’s rights groups, including the National Human Rights Commission, which, in a statement released the following day, said: “The idea that the home is a safe space for women and that the partner and family constitute relationships free of violence is erroneous.”

Just a week later, the president doubled down on his previous comments, going so far as to claim that 90 percent of the emergency calls were “false.” The president later appeared to do an about-face on July 29, when Secretary for the Interior Olga Sánchez Cordero finally acknowledged the spike in violence during another mañanera.

“The president’s comments were unfortunate, to say the least,” Ms. Campbell said. “There’s this nice discourse of his government being progressive and looking out for women’s rights, but they lose all credibility when he claims that we’re better off when we’re at homes, when that’s precisely where we’re always beaten.”

To make matters worse, the federal government caused unrest in late April, when it announced sweeping austerity measures that included budget cuts to a number of institutions specifically created to combat violence against women. After rights groups raised the alarm, the government again backtracked in a July 14 statement, saying no government programs focused on preventing and combating violence against women would be subjected to lower budgets.

Indigenous men in Honduras are being abducted. Are the police to blame?
Jackie McVicar

Despite that about-face, Ms. Franco complains that the government response to the sudden increase in domestic violence has been woefully insufficient.

“The government’s response is disjointed. Different levels of government, different institutions don’t coordinate with each other when they receive a distress call about violence,” she said. “There are federal institutions, state institutions, they all lack the resources. That’s why victims often don’t want to report violence.”

Rights groups fear the situation won’t improve any time soon, as Mexico continues to face one of the worst outbreaks of the coronavirus in the world, with almost 50,000 deaths and a half million infections as of Aug. 3.

“This is a problem that existed before the pandemic started and it will continue to exist after the pandemic ends,” said Ms. Campbell. “There’s not a single authority in Mexico that thinks about women.”