Child prostitution in Zimbabwe spikes amid two other crises: Covid-19 and hunger 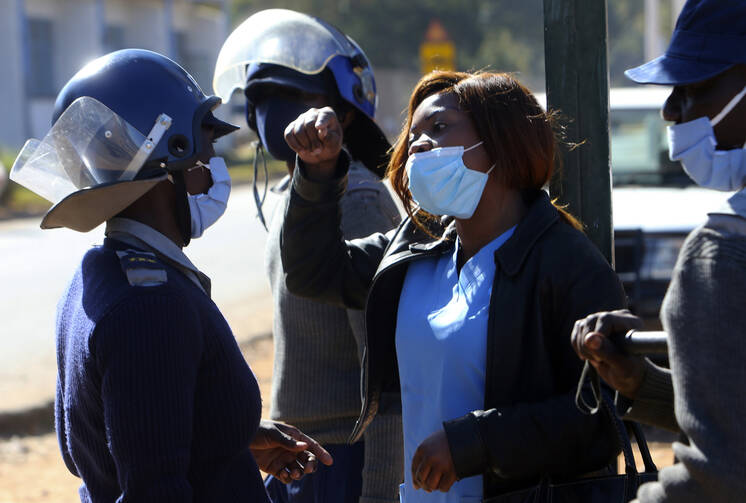 Riot police surround a nurse who was protesting at a government hospital in Harare on July, 6. Dozens of nurses wearing masks and their white and blue uniforms gathered for protests at some of the country’s biggest hospitals in the capital, Harare, and the second-largest city of Bulawayo.(AP Photo/Tsvangirayi Mukwazhi)

The young girls, many barely teenagers, line up along a short street that passes through a popular bar strip about 500 feet from the St. Peter’s parish church in Mbare, one of the oldest and most impoverished suburbs of Zimbabwe’s capital, Harare.

It is just after 8 p.m., a day after President Emmerson Mnangagwa introduced a dawn-to-dusk curfew on July 22. That was one among several strict coronavirus lockdown measures that included a limit on religious gatherings to no more than 50 people.

Now the girls play hide-and-seek with roving police attempting to enforce the new measures. They disappear into narrow passageways between Mbare’s bars and stores or hide at the back of the buildings as a ramshackle police van rumbles past. They re-emerge after a few minutes to retake their posts along the street, beckoning again to potential clients who pass by.

St. Peter’s Martin Nyadewo, S.J., explains that there are more young girls selling their bodies as Zimbabwe’s economic difficulties continue, in a broad collapse now exacerbated by the pandemic. The city is experiencing a spike in social vices like child prostitution and domestic violence.

“We have got a serious problem of child prostitution. And I don’t mean organized prostitution, but among the young girls themselves who are increasingly taking to the streets and corners hoping to sell their bodies to be able to feed themselves and their families,” Father Nyadewo said.

There are more young girls selling their bodies as Zimbabwe’s economic difficulties continue, in a broad collapse now exacerbated by the pandemic. The city is experiencing a spike in social vices like child prostitution and domestic violence.

Many of the girls are the heads of households that are bereft of parents, who are either dead or who have abandoned their children, but the households often include elderly grandparents “who can’t fend for themselves.”

The parish hopes to combat this phenomenon by offering economic alternatives for these young girls and other young people who are struggling to support their families. It is offering loans to begin backyard poultry production or to open mini kitchens that sell food to traders in Mbare’s informal markets. The parish also provides food assistance to vulnerable families.

Nigel Johnson, S.J., the development director for Jesuits Zimbabwe, explained that “a lot of people in Zimbabwe have lost their income as a result of the Covid-19 and their families do not have money” to buy food.

Catholic relief agencies in Zimbabwe, including Catholic Relief Services from the United States and the Catholic Agency for Overseas Development from the United Kingdom, have been redirecting their development efforts toward food relief and programs to help address domestic violence against women and to assist the growing numbers of vulnerable children.

In a pastoral letter released on July 16, Zimbabwe’s Catholic Bishops Conference warned that “livelihoods that were already heavily strained due to the economic situation in the country, the droughts of the last two years, Cyclone Idai and other factors have taken a further knock under the lockdown.”

According to the World Food Program, Zimbabwe has the world’s second-highest inflation rate after Venezuela—overall prices have surged by more than 122 percent since the start of the year and by more than 800 percent since March 2019. By the end of the year, the number of food-insecure people living in urban areas in Zimbabwe alone will have increased from 2.2 million to 3.3 million—45 percent of the country’s total urban population.

Catholic relief agencies in Zimbabwe have been redirecting their development efforts toward food relief and programs to help address domestic violence against women and to assist the growing numbers of vulnerable children.

But even Zimbabweans in rural areas, typically more food self-reliant, face shortages this year because of drought, the coronavirus and economic dislocation. According to W.F.P. forecasts, 5.3 million rural Zimbabweans will be food-insecure by the end of 2020 and between 3 and 3.3 million will face a “crisis” situation.

The Famine Early Warning Systems Network reported at the beginning of July that Zimbabwe’s food insecurity and socioeconomic difficulties are growing worse as a result of “economic volatility and depreciating parallel market exchange rates” that are “constraining livelihoods” and eroding disposable incomes.

The Mnangagwa government attempted to restore the local currency in June 2019, officially ending a decade when the use of the U.S. dollar prevailed, but the “Zim dollar” has quickly lost value, depreciating by over 80 percent between May and mid-June. Now, “volatile macroeconomic conditions are anticipated” through January 2021, researchers from the early warning network said.

Use of the Zimbabwean dollar is increasingly being abandoned for transactions from the commonplace to the official in favor of the use of U.S. currency. Local economist John Robertson described this unofficial dollarization of Zimbabwe’s economy as a vast no-confidence vote for Mr. Mnangagwa’s economic policies and for a local currency that has been consistently losing value over the past two years, despite repeated efforts to prop it up.

Zimbabwe’s businesses are now required to use a dual system that prices goods in U.S. dollars as well as in the local currency according to the official exchange rate. But that rate trails the prevailing street exchange rate substantially.

In addition to worries over food insecurity and economic difficulties, officials at Catholic Relief Services are concerned about a dramatic increase in domestic violence cases in Zimbabwe.

“A lot of people are unable to earn U.S. dollars, and that presents a lot of difficulties,” said Mr. Robertson. Workers who are paid only in local currency are forced to adapt quickly to its galloping inflation rate. “It gets worse when every business or supplier asks to be paid in nothing else but the U.S. dollar,” he said.

“Millions of Zimbabweans can’t get U.S. dollars, and a lot of people in this country don’t have steady work,” Mr. Robertson said.

In addition to worries over food insecurity and economic difficulties, officials at Catholic Relief Services are concerned about a dramatic increase in domestic violence cases. Rita Billingsley, the agency’s country representative for Zimbabwe, said by email that the “increase in gender-based violence and violence against children” has prompted C.R.S. to partner with child protection agencies and women’s shelters in Zimbabwe.

“Women and children experiencing abuse can call our toll-free numbers or use WhatsApp messages to report abuse,” Ms. Billingsley said. “We then provide transportation services to remove them from abusive situations. For those households without phones, we offer services through guided home visits by front-line community child care workers, whom we have thoroughly trained in physical distancing and infection prevention and control measures.”

The impact of relief grants and food parcels provided by Catholic agencies is also being stretched as recipient households “share the food with their extended family,” said Ms. Billingsley.

St. Peter’s has a list of 450 families it is distributing food to, but Father Nyadewo said, “there are a lot more people whom we are not able to reach.”

The Catholic Agency for Overseas Development has been supplementing food relief programs with income-generating projects and training on climate resilience farming. Cafod’s Zimbabwe representative, Verity Johnson, said, “A number of the women’s groups we work with are now making masks to sell in their communities, which helps protect people from Covid as well as securing an income.

“There are rising needs in communities for food but also access to water for people to be able to observe the hygiene protocols around Covid-19, such as frequent handwashing.”

Zimbabwe’s health sector, already poorly resourced, is burdened by corruption. Mr. Mnangagwa dismissed the health minister, Obadiah Moyo, after he was arraigned before a Harare court for abuse of office involving irregularities over the awarding of contracts for the supply of Covid-19-related equipment. Health workers are frequently on strike to demand better working conditions and wage increases to cope with Zimbabwe’s rampaging inflation.

Front-line health workers at the country’s key public health facilities have been testing positive for Covid-19, but more worrying are the great numbers of Zimbabweans who are at greater risk of death or complications if they get infected by coronavirus because of underlying health conditions.

“Another critical concern for us was how people with pre-existing conditions could continue to receive the medication and support they need to stay healthy,” Ms. Billingsley said. “For the people we work with who live with HIV, we have continued to provide intensive support to ensure they are able to access their critical ART and viral load testing, while limiting their Covid-19 risk.”

Father Johnson said that Jesuit-run hospitals in Zimbabwe are seeing increased numbers of people seeking medical care. Patients may be avoiding government-run facilities, which for many have become death traps because there is usually no medicine and no medical staff to attend to them there, according to media reports quoting local doctors.

“We also have two rural hospitals, that’s at St. Paul’s Mission in Musami and another in Makonde, and we have managed to supply those two hospitals with [personal protective equipment] and medicines,” said Father Johnson. His challenge will be to keep that support going as the nation’s economic struggles continue.