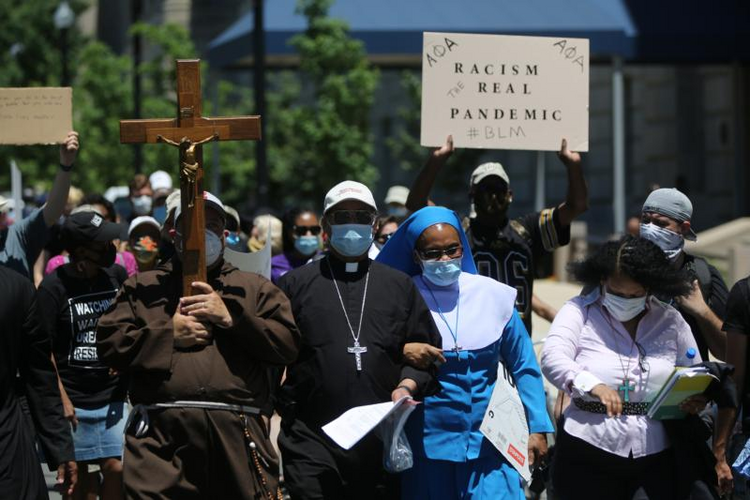 Washington Auxiliary Bishop Roy E. Campbell and a woman religious walk with others toward the National Museum of African American History and Culture during a peaceful protest June 8, 2020, following the death of George Floyd, an unarmed black man whose neck was pinned to the ground by police for more than eight minutes before he was taken to the hospital. (CNS photo/Bob Roller)

WASHINGTON (CNS) -- Some bishops have denounced them. Others have embraced them. One held a sign with the words as he kneeled in a moment of prayer recalling the death of George Floyd, which sparked demonstrations and wide discussion about racial injustice in the United States.

Some Black Catholics believe the unrest and the ubiquitous words proclaiming that "Black Lives Matter" provide an opportunity for the Catholic Church in the United States to engage in an uncomfortable and long-overdue deep discussion and look at racism and racial injustice.

From his @PadreInAtlanta Twitter handle, Father Bruce Wilkinson, a retired priest, has been almost daily calling attention to and sometimes calling out those who attack those three words, including some bishops.

"They've the taken position from someone telling them that 'this is a Marxist group and pro-abortion and pro-gay therefore we have to be against them,'" said Father Wilkinson in a July 8 interview with Catholic News Service. "There are some, I'm sure, involved in the (Black Lives Matter) political group that are about that, but that is far from the vast majority of people."

Instead, what Father Wilkinson wants others to understand is those engaging with the words "Black Lives Matter," including many Black Catholics like him and those who support them, "what they are seeking, especially in the Catholic Church, is to have racism be addressed."

He points to a July 2 statement from Bishop Anthony B. Taylor of Little Rock, Arkansas, who spelled out in detail support of the Black Lives Matter movement.

Speaking from his experience as a new pastor at an Oklahoma City parish in 2003, Bishop Taylor recalled how he arrived to tend to a community that was 95% Hispanic and had a weekend schedule with six Masses -- three in English and three in Spanish. The Spanish-language Masses were packed, with people standing in the back, in the aisles and sometimes outside the church's front door, he said, and though the English-language Masses were less than half full, they had the more desirable Sunday morning time slots.

"I asked what we would do if the tables were turned and we had English speakers standing in the back, along the aisles and outside the front door and they realized that of course, we would adjust the Sunday schedule to provide more English Masses. In that way, the eyes of these well-meaning people were opened to the hidden injustice embedded in our Sunday schedule," he wrote.

"When I left that parish five years later, we had nine weekend Masses that better corresponded to the makeup of the parish: seven in Spanish, one in English and one bilingual," he said. "When people know that they matter, things begin to change."

The bishop continued, saying that something similar is happening with the movement seeking to point out racial injustice.

"That is the contribution that the Black Lives Matter movement is offering to us today. All lives matter, of course, but as a society we don't act that way -- and that's the point," he wrote in his statement. "There are injustices embedded in the way our society is structured to which we are often blind. Most of my Anglo parishioners were aware of the crowding at the Spanish Masses, but they didn't think of it as a problem, indeed viewing it from outside, they spoke with admiration of the fervor of their fellow parishioners and were blind to the underlying injustice."

Looked at from a different vantage point, the injustice becomes clear, he said.

"In a similar way, most of us are aware of some of the disadvantages that come with being Black in America, but from the outside we tend to ascribe these disadvantages to internal factors within the African American community and we miss the point that if Black lives really mattered as much as white lives, our whole society would be structured differently," he wrote.

The bishop pointed out in detail and with statistics structural injustices for Black Americans in law enforcement, health care, employment, and education.

It's important that others take the time, as Bishop Taylor did, to think about, read about, and have a dialogue with parishioners of color to "come to understand what (Black Lives Matter) is, before they condemn something," said Father Wilkinson.

Marcia Chatelain, a Georgetown University history professor, said the church has an opportunity to work toward the greater interracial justice the Black Lives Matter movement espouses.

"While they may not find themselves aligned with all the points that have been expressed, they really do have an incredible opportunity to engage in an important moral civic and social movement," she said in a July 9 interview with CNS. "I would hope that, at some point, people would take time to really understand what they're debating."

Parishes also should be having difficult conversations about the ways that they may have benefited from slavery, segregation or other ways that have been or still are, detrimental to people of color in their localities, she said. But some might be reluctant to do so, Chatelain added, since some might find themselves "so proximate to the problem."

And Father Wilkinson has been witness to some of it. As a retired priest, if he's not helping out, he attends Masses without his collar or anything that would identify him as a priest and sits in the pews with the laity.

"What I have found is disconcerting," he said. "I've noticed some people, if I'm in a church that's predominantly white, look at me as if I'm not supposed to be there, to the point where at the sign of peace, I don't even get approached. It's not universal ... but there's been too many that I've gone to where it's happened."

Those are the kinds of experiences bishops and others in church hierarchy need to listen to so they can engage with the message some Catholics have found in the Black Lives Matter movement, he said. But that doesn't begin to address the structural injustices that Bishop Taylor referred to, he added.

For Bishop Taylor, as for Father Wilkinson, the plight of Black Americans speaks to one of the church's main teachings, and yet it is a situation not absent from the life of the church.

"If you and I are truly pro-life, we are obligated to work for the protection and respect for human life from the first moment of conception to natural death and every stage in between, and thus it is obvious that racism is a pro-life issue," Bishop Taylor wrote.

"Racism is a sin," he added, "and we have to admit that even as church, we have not been immune to racial bias and the blindness to structures of sin that affect how our own institutions are run."

While it was easier to condemn acts that led to George Floyd's death and the killing of many other people of color, he said, some could be "blind" to structural injustices that continue to harm others. Some also may fail to take into account the generational effects of slavery, segregation and the systemic use of violence, he explained, "including the lynching (publicly approved hangings) of more than 4,000 black men, women and children across 800 counties throughout the United States between 1877 and 1950."

Those realities must be recognized and addressed in any attempt to combat racism, Bishop Taylor said.

"I hope this has helped you understand why it is so important for us to insist that Black Lives Matter and to view the task before us through the pro-life lens of our Christian belief in the God-given intrinsic dignity of every person, in this case Black people, rather than the more secular Marxist-inspired class struggle lens that some would propose and which sometimes gets disproportionate coverage in the news," the bishop wrote.

For Chatelain, the task at hand is one that requires patience and diligence on the part of Catholics, one that goes beyond just recognizing what happened or reading a few books, "it has to be a lifelong struggle," she said.

Making a commitment to that process requires making serious changes in personal behavior, pointing out racial injustices at work, institutions or even by family members, she said.

"I think we are at a moment of moral reckoning is this country," she said.

The question is if the church is going to continue to be an observer in a social movement or is it going to look for an active path toward a search of justice "for people who are justly trying to experience the fullness that life should offer everyone?" she asked.

Father Wilkinson said that as pastors, priests are required to attend pastoral training sessions on how to deal with a wide array of topics, such as abortion, how to address immigration issues and how to address religious liberty, but once he asked whether they could discuss differences in culture and people of color.

"I was told that was too difficult," he said. "If it's too difficult and we're people of faith, I just don't see how we don't trust God enough to lead us."

Provide feedback on this article
Join the conversation: Login or create an account
Before you can comment, you need to update your profile to include your first and last name, as required in our comments policy. Then reload this page and you'll be set up for commenting. Update your profile
Advertisement
More: Black Catholics / Race / Racism