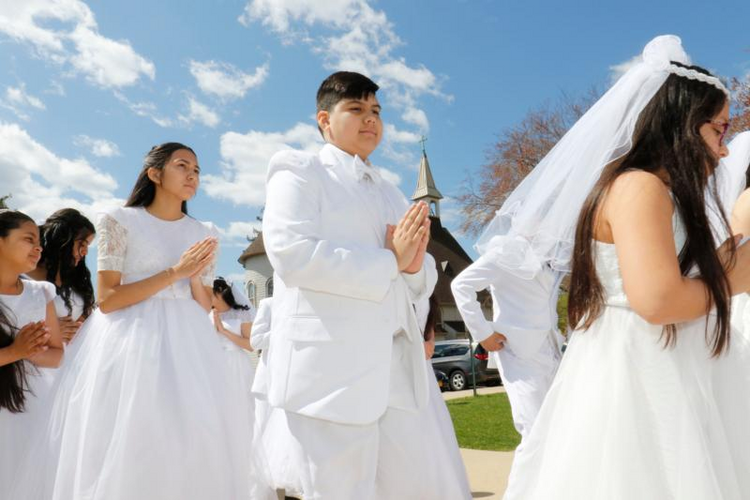 Young people process into St. John of God Church in Central Islip, N.Y., in 2019, before receiving the sacraments of initiation -- baptism, confirmation and first Communion. (CNS photo/Gregory A. Shemitz)

VATICAN CITY (CNS) -- Although he said, "I would never go to war" over the proper age to administer the sacrament of confirmation, Archbishop Rino Fisichella said too often it seems that the sacrament is delayed to "blackmail" young people into continuing to come to church.

The archbishop, president of the Pontifical Council for Promoting New Evangelization, made the comment June 25 at the Vatican presentation of the updated "Directory for Catechesis."

In his prepared remarks, he said the directory hoped to promote "a 'pastoral conversion' in order to free catechesis from some chokeholds that prevent its effectiveness."

The first "chokehold," he said, was treating catechesis as if it were a school subject with information a teacher imparts to students according to a fixed calendar and with a fixed text.

Instead, the directory insists catechesis is the process of leading a person to a personal relationship with Jesus in the church community and to a life lived visibly with Christian values, particularly through works of mercy and charity.

The second "chokehold," he said, "is the mentality by which catechesis becomes the condition for receiving a particular sacrament of initiation, with a consequent void opening up once initiation has ended."

Related to that, he said, "is the exploitation of a sacrament in the name of pastoral strategy, so that -- for example -- the time frame for confirmation is dictated by the need not to lose the small flock of young people remaining in the parish rather than by the significance which the sacrament possesses of itself in the economy of the Christian life."

Asked by a reporter to elaborate, Archbishop Fisichella said setting an age for confirmation is a decision the Vatican has left up to bishops and, besides, it is a "lost battle" that can never be won.

The archbishop said he was confirmed at the age of 7; early in the morning he received his first Communion and later that morning the bishop came to confirm his class. In addition, he noted, many of the Eastern Catholic churches have preserved the tradition of administering all the sacraments of initiation -- baptism, chrismation (confirmation) and Eucharist -- to infants all at once.

While Archbishop Fisichella said there were valid reasons the Latin-rite church began administering the sacraments separately, "saying that the sacrament of confirmation is only for adults, to manifest maturity in the faith, does not correspond to the nature of the sacrament itself."

And while different practices are acceptable, "I don't think it's nice to exploit a sacrament for pastoral aims such as delaying for as long as possible the reception of confirmation, with the necessary catechesis, to keep within the parish a group of very faithful" young people.

In other words, he said, some parishes seem to want to hold on to young Catholics "as long as possible under a kind of blackmail insofar as granting them the sacrament."

Provide feedback on this article
Join the conversation: Login or create an account
Before you can comment, you need to update your profile to include your first and last name, as required in our comments policy. Then reload this page and you'll be set up for commenting. Update your profile
Advertisement
More: Faith / Sacraments / Youth / Evangelization