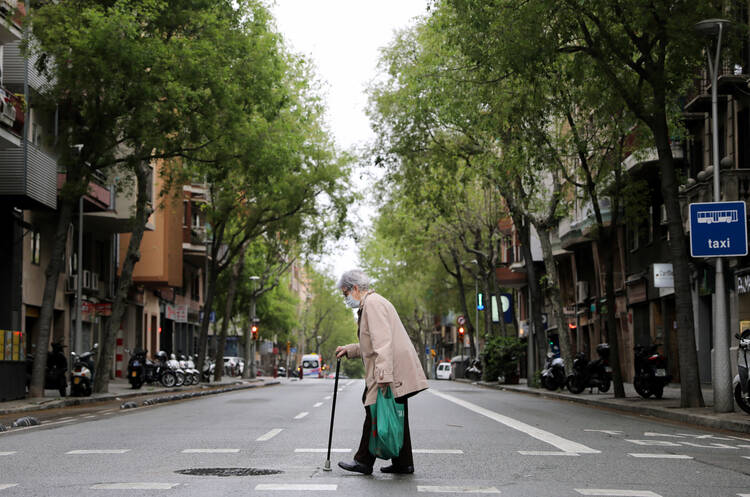 An elderly woman wears a protective face mask as she walks with shopping bags during the COVID-19 pandemic in Barcelona, Spain, April 1, 2020. (CNS photo/Nacho Doce, Reuters)

In Madrid, the Rev. Gabriel Benedicto and his pastoral team sing on their balconies every day at 8 p.m., hoping to lift the spirits of an entire neighborhood. The carefully selected songs range from salsa hits to pop-rock favorites and are recorded and later uploaded to the church’s YouTube channel. The channel’s subscriber count jumped from 85 to 12,300 as the nightly performance became a popular respite from the Covid-19 crisis. His church, Our Lady of La Paloma, has become an internet sensation. According to Father Benedicto, most followers are “older people.”

“A lot of people say that it’s the only thing they have,” he told America.

At first, Father Benedicto was skeptical about connecting with people using digital media, dismissing it as too “artificial.” Before the pandemic, he had transformed his parish’s ministry to the sick to a “ministry of the lonely,” in which the pastoral team would care for the isolated elderly who had few family ties. “Loneliness is now an illness in our society,” he said.

But as Covid-19 swept through Spain, prompting strict confinement measures and impeding physical interaction, Father Benedicto embraced technology, and so have his parishioners. The church’s YouTube account has been used to broadcast Mass and, sadly, many funeral services, in high demand as fatalities grew and people could not mourn lost loved ones and friends in person.

“The YouTube channel has delivered a way to be able to follow Mass for people who are lonely, and for people who have had someone close to them die and could not bury them,” he said, adding that the pastoral team also calls people on the phone every day. “It’s a small gesture, to accompany people in that solitude, especially when facing death.”

As Covid-19 swept through Spain, prompting strict confinement measures and impeding physical interaction, Father Benedicto embraced technology, and so have his parishioners.

The Commission of the Bishops’ Conferences of the European Union (Comece) has similarly turned to the internet to stream Masses and celebrations from Europe’s largest churches at SanctuaryStreaming.eu. “The largest sanctuaries such as the Vatican, Fátima and Lourdes already had this streaming service; what we did was to simply gather them all together on one page,” the Rev. Manuel Enrique Barrios Prieto, the commission’s secretary general, said.

In Europe, there is a broad consensus that the elderly have suffered the brunt of the coronavirus pandemic—some have called it a “silent massacre.” Numbers gathered across the European Union suggest that between 40 and 45 percent of all Covid-19 deaths have occurred in elder care homes. In Spain, 57 percent of the country’s deaths from early March to April occurred in nursing homes and other facilities for the elderly.

In addition to being at greater risk than the general public, the elderly also suffer from isolation under the emergency confinement measures. Gloria Álvarez, a septuagenarian and member of Father Benedicto’s parish, did not leave her apartment, where she lives alone, for two months. At the start of confinement in March, when Spain suffered its highest losses, Ms. Álvarez started feeling ill. Although she may never know if she had been infected by the coronavirus, she recalled symptoms like high fever, chills and exhaustion.

“It was very difficult for me; I was very afraid,” she said. She became a regular follower of digital content offered by Our Lady of La Paloma. “What helped me is that I did not feel alone,” to know that “someone is praying” for and with her helped her get through.

Sometimes, she said, she cannot help but feel lonely and holds tight to the reassuring presence of Jesus Christ. But she added, between laughs, that she also enjoyed listening to Father Benedicto’s daily serenades on the internet. “Father Gabriel keeps us busy during the afternoons, my goodness!”

In Europe, there is a broad consensus that the elderly have suffered the brunt of the coronavirus pandemic—some have called it a “silent massacre.”

She watches videos from her church’s YouTube channel through her tablet computer, which she finds easy to use. Other people her age or older, however, may not be as comfortable using electronic devices. In 2015, a quarter of those older than 65 said in a Pew Research survey they were a little or not at all confident with contemporary electronics. Three-quarters said they needed help in setting up the devices.

In hospitals and nursing homes, lack of access to digital devices—and uneven skill development for using them—have proved additional barriers during a time when human connection is crucial. Countless stories have circulated on media conveying the sorrow of family members who have lost loved ones in hospitals without being able to see them or speak to them one last time.

In Belgium, volunteers have vowed to fill that void, distributing tablets to hospitals and nursing homes, places that had been essentially sealed off from the public. By early May, the newly formed “Link Up” had distributed 1,000 tablets in almost 400 facilities, enabling between 10,000 and 15,000 confined people to stay in touch with their families.

“It was an emergency situation,” Benjamin Riffon, a founding member of Link Up, said, discussing the effort during a Zoom conference. “People were dying, the family had to be able to see them before they were gone.”

Mr. Riffon explained that tablets were the best choice for use in nursing homes. They offer larger screens than smartphones and their smooth surfaces are easier to clean than computer monitors and keyboards. The tablets, which had been donated by individuals or by companies, were thoroughly disinfected before being handed over to the elder care facilities.

In Belgium, volunteers have distributed tablets to hospitals and nursing homes, places that had been essentially sealed off from the public.

Each hospital and care home appointed staff members to help patients and the elderly contact their families. Questions such as which user account, Wi-Fi connection or application to choose from are dealt with on a case-by-case basis.

“I think [the Link Up campaign] revealed a pre-existing need,” Mr. Riffon said. Many care homes with limited resources, he said, had not been able to offer their residents the opportunity to keep in touch with family. “Are we treating our elderly right? No,” Mr. Riffon said.

The fatality rate among seniors because of Covid-19 has also provoked conversations throughout Europe about how societies treat their elderly. The AGE Platform, a network of European Union organizations that defend the human rights of older people, has been outspoken against ageism in Europe. It has especially criticized a kind of impromptu health care rationing that occurred during the worst days of the crisis as inadequate hospital capacity led to doctors prioritizing younger patients over older ones.

“Chronological age should not be used for the allocation of goods and services and should not be a criterion for determining people’s vulnerabilities, prognosis or treatment options,” AGE wrote in its newest report.

Also criticized in Europe has been the “herd immunity” strategy apparently adopted by some E.U. member states, if unofficially. It proposes to cope with the pandemic by slowing down the rate of infection instead of seeking to eliminate the virus, placing the elderly and those with underlying conditions at higher risk. Some called it a form of eugenics.

In these debates, the European bishops’ commission has been pressing E.U. leaders to protect the elderly. “Comece is doing everything possible to make Europe faithful to its values of unity, solidarity, defense of human dignity and helping other regions as much as possible,” Father Barrios said.

“Old people feel that they are a burden,” Father Benedicto said, “because little by little, society tells them: ‘You’re not worth anything anymore.’”

Father Benedicto said he has sensed a shift in recent decades in the attitude toward older people in Spain. Older people who cannot work or cannot take care of grandchildren have become less valued, he said. “When we are not useful, we are not worthy,” he said was the message, suggesting that the sense of worthlessness has been gaining ground in Spain’s euthanasia debate. Legislative proposals to legalize the practice had been under discussion in Spain when the pandemic arrived.

“But now, we realized that people don’t want to die, they just don’t want to suffer,” he said. “And people are fighting so that older people don’t die. The heart has once again detected the need to protect the life of the elderly.”

@MelissaVidaa
Show Comments ()
Join the conversation: Login or create an account
Before you can comment, you need to update your profile to include your first and last name, as required in our comments policy. Then reload this page and you'll be set up for commenting. Update your profile