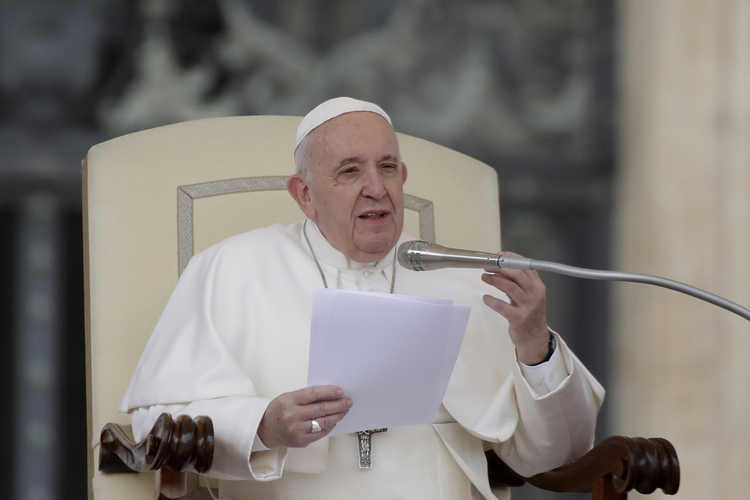 In this Feb. 26, 2020 file photo, Pope Francis gives his speech during his weekly general audience in St. Peter's Square at the Vatican. The Vatican on Saturday, Feb. 29, 2020 released a speech by Pope Francis where told the scandal-marred Legion of Christ religious order it still has a long road of reform ahead, making clear that 10 years of Vatican-mandated oversight didn’t purge it of the toxic influences of its pedophile founder. (AP Photo/Alessandra Tarantino)

VATICAN CITY (AP) — Pope Francis told the Legion of Christ religious order Saturday it still has a long road of reform ahead, making clear that 10 years of Vatican-mandated rehabilitation hadn't purged it of the toxic influences of its pedophile founder.

In a prepared speech, Francis told the Legion’s new superiors a “very vast field” of work was needed to correct the Legion's problems and create a healthy order. He encouraged them to work “energetically in substance, and softly in the means."

“A change of mentality requires a lot of time to assimilate in individuals and in an institution, so it’s a continual conversion,” Francis said. “A return to the past would be dangerous and senseless.”

The Vatican took over the Legion in 2010 after revelations that its founder, the Rev. Marcial Maciel, sexually abused dozens of his seminarians, fathered at least three children and built a secretive, cult-like order to hide his double life.

Even though the Vatican envoy tasked to run and reform the Legion declared the order cleansed and reconciled with its past in 2014, new sexual misconduct scandals have called into question whether his mission was really accomplished.

Victims of other Legion priests have come forward, indicating that a culture of abuse extended far beyond Maciel’s crimes and involved a high-level cover-up by superiors who are still in power.

Francis had been scheduled to meet with the leadership of the Mexican order and its Regnum Christi consecrated branches, which are in Rome this month to elect new superiors and set policy decisions. Francis skipped the audience because he is sick. But the text of his prepared remarks was given to the Legion and released publicly by the Vatican press office.

In the speech, Francis gave his most extensive comments to date about the Legion and Maciel, who was hailed during the papacy of St. John Paul II for his purported orthodoxy and ability to attract vocations and donations.

The Legion scandal sullied John Paul's legacy since he and his aides turned a blind eye to evidence, including documentation in the Vatican dating from the 1940s, that Maciel was a drug addict, pedophile and religious fraud.

Francis said that while the Legion cannot deny that Maciel founded the order, “you can no longer consider him an example of holiness to imitate" — a reference to the fact that some Legionaries still keep photos of him and read the writings of a man they considered a living saint.

Francis said the cult of personality Maciel created to run the order “in some way polluted" the original spiritual inspiration for the Legion.

The pope praised Legion members for their willingness to accept change and urged them to continue the path of renewal, including with a new governing council that he said must act as a check on the superiors.

Ever since the Legion scandal erupted in 2009, the number of its priests and members of its Regnum Christi lay branch have fallen, and several of its schools and seminaries have closed. The Legion now counts 970 priests, and only 51 novices entered seminary training last year, down from an average of around 200 a year at the Legion's height.