What is the solution to war? Forgiveness 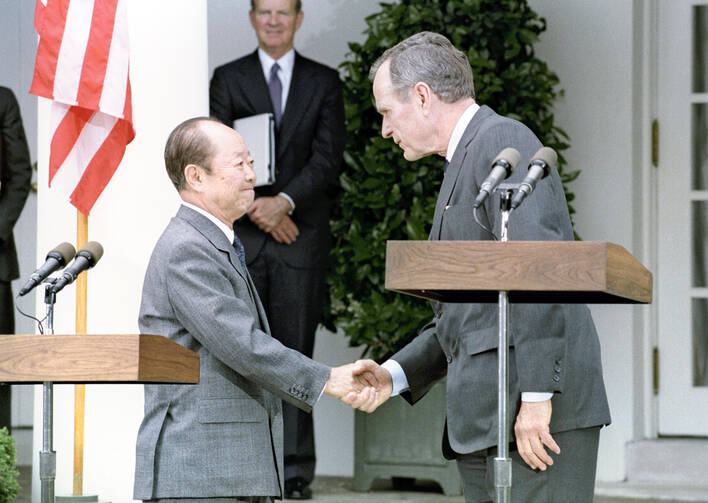 U.S. President George Bush and Japan's Prime Minister Kiichi Miyazawa shake their hands during a press conference at the White House after their meeting in Washington on Sep. 1, 1992. U.S. 41st President George H. W. Bush has died at age 94 in Houston on November 30, 2018. (The Yomiuri Shimbun via AP Images)

Thirty-one years ago, on a cold February night, I stood on the South Lawn of the White House awaiting the president of the United States. George H. W. Bush had been in office for just over a month, and in one of his first official acts he had decided to attend the funeral of Hirohito, the emperor of Japan who had reigned before, during and after the Second World War and whose personal culpability for that conflict is still debated among historians.

I was a junior in high school that winter and had taken my first solo flight to Washington, D.C., to take part in a congressional seminar for young people, the highlight of which turned out to be this chance to see the president. If you are ever invited to watch the presidential helicopter land at the White House, I suggest you say yes. It is an impressive sight.

More impressive, however, is what President Bush had just done for his country and for Japan. That the president had flown halfway around the world to pay his respects to the Japanese emperor, a mere 44 years after the end of the war in the Pacific, represented a major milestone in the new relationship between our countries. That George Bush had personally done this was even more significant. He was, after all, a former U.S. Navy pilot, who was shot down by the Japanese in an engagement that killed his crewmates and nearly cost him his life. Japanese combatants had killed many of his comrades and friends. In turn, Lieutenant Bush had killed many Japanese sailors and airmen. And yet, as he said in 1991 at an event commemorating the Japanese attack on Pearl Harbor, “I can still see the faces of fallen comrades, and I’ll bet you can still see the faces, too. [But] just speaking for one guy, I have no rancor in my heart.”

The war in the Pacific was one of the deadliest, ugliest conflicts in human history, marked by a savagery unprecedented in warfare and brought to a close only by the deadliest weapon ever devised. Millions perished in the cataclysm. Yet in the decades after the war, men who had fought through the horror and then entered public life took up the task of reconciliation. John F. Kennedy, whose PT boat was famously split in two by a Japanese destroyer, welcomed the Japanese prime minister to the White House in June 1961. At the time of his assassination in 1963, President Kennedy was planning a visit to Japan that would have been the first by a sitting U.S. president.

In the decades after WWII, men who had fought through the horror and then entered public life took up the task of reconciliation.

In 1971, President Richard Nixon, who had served in combat in the Solomon Islands, welcomed Hirohito during his first visit to the United States, during a stopover in Alaska. In 1974, Nixon’s successor, Gerald R. Ford, who had served on the U.S.S. Monterey during combat in the Pacific, became the first U.S. president to visit Japan. To everyone’s surprise, Mr. Ford was met by a Japanese band playing the University of Michigan football song, “Hail to the Victors.”

“In War: Resolution,” Winston Churchill once wrote, “In Defeat: Defiance. In Victory: Magnanimity. In Peace: Good Will.” Christians have another word for magnanimity and for good will. As the historian John Meacham reminded us, it is the last word George H. W. Bush used in his diary to sum up his personal life code: “Be strong. Do your best. Try hard. Forgive.”

Could a new religious hymn about America break our polarization?
Matt Malone, S.J.

Forgive. I don’t know whether these presidents ever described their diplomacy with Japan as an act of forgiveness, but it sure looks like that from here, for the result of their efforts is a friendship between our two nations that, though it has been put to the test, still endures and is a source of strength for both countries.

The result of their efforts is a friendship between our two nations that, though it has been put to the test, still endures and is a source of strength for both countries.

The next time someone suggests that forgiveness is naïve or impractical, we should remember this history. In so many places, at so many times, forgiveness is the only way out. In that sense, nothing is more practical.

Correction, Feb. 26: During World War II John F. Kennedy’s PT boat was rammed and split in two by a Japanese destroyer. It was not sunk by a torpedo.