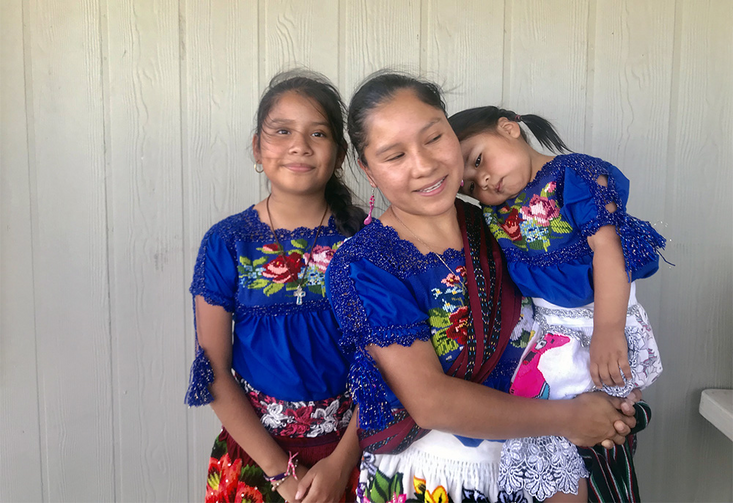 Conchita Pozar, 30, with her daughters Jackie Zacarias, 9, and Lesly Zacarias, 2, on Sept. 24, 2019, in the Coachella Valley. Pozar is Purépecha and a community activist who is seeking to preserve the Catholic faith in her community. RNS photo by Alejandra Molina

Sansor and Pacheco are with Missionary Guadalupanas of the Holy Spirit, a nonprofit corporation of Catholic women based in Mexico City. The organization has provincial headquarters in Los Angeles.

They were brought on by the Diocese of San Bernardino, which serves Riverside and San Bernardino counties, under a three-year contract  to reach the estimated 1,500 Purépechas living in the region. They started last August.

Although their presence in the Coachella Valley may be categorized as “Hispanic ministry,” the Missionary Guadalupanas recognize that the Purépecha people “have their own culture,” Sansor said.

“They’re a community that deserve a lot of respect. They have their own language and traditions,” Sansor said.

“We’re here to accompany them in their Catholic faith,” Sansor said.

Purépecha is a language and the name of the pre-Hispanic people of the Central Mexican state of Michoacan. Purépecha people in Riverside County speak Purépecha as well as Spanish, and some, especially the children, also know English. The community has endured discrimination due to their language and traditional clothing.

Sansor and Pacheco have immersed themselves in the community by attending neighborhood town hall meetings and being present in birthday and baptism celebrations. Many Purépechas in the region work in the fields where they harvest limes and other vegetables, and they live in mobile home parks and other communities in the rural region.

On Tuesday, Sept. 24, Sansor and Pacheco led a Catholic Extension delegation to meet Purépecha leaders and learn how they can help support the community. Catholic Extension is a nonprofit that invests in constructing new churches and ministries in poor communities.

Conchita Pozar, 30, is Purépecha and has been living in the North Shore community in the Coachella Valley for seven years. She’s a community activist who is raising awareness on the lack of streetlights in her neighborhood and the public health risks associated with the shrinking of the nearby Salton Sea.

She’s also seeking to preserve the Catholic faith in the area.

Pozar and her neighbors gather for Mass outside a nearby grocery store every other Tuesday evening. Attending Mass can get uncomfortably hot in the summer months when temperatures reach up to 120 degrees. A nearby Catholic Church is about 10 miles away, but it’s difficult to access for people like Pozar who don’t drive. Pozar said it’s also hard to take the bus, because it arrives every three hours.

To Pozar and others, these are just conditions they’ve had to endure in order to be able to practice their Catholic faith. With the help of the Missionary Guadalupanas, Pozar said she has learned how to host a Via Crucis procession in her home with her neighbors during Holy Week. She has also learned how to pray to the Virgen de la Concepción — a virgin celebrated in Pozar’s hometown of Ocumicho in Michoacan. She’ll soon be hosting Bible study classes.

Now, Pozar and the general community are trying to fundraise enough money to secure a nearby church space where they can pray and host events free from the heat and winds.

Pozar said that with the help of the Missionary Guadalupanas, “We’re starting to realize we need a place of God here so we can pray.”

John Andrews, a spokesman for the Diocese of San Bernardino, said Purépechas would often be seen at Masses where Bishop Gerald Barnes would be present, like during the Feast of Our Lady of Guadalupe. He said the Diocese sought the Missionary Guadalupanas because the group is known for its work with indigenous people.

“The feeling has been that since they are in more farther reaching areas of the valley and more of a self-contained community, they were not being adequately ministered to,” Andrews said.

A 2008 Los Angeles Times article documented Barnes’ visit to the community during Easter Sunday. At the time, a Purépecha community was at risk of losing its mobile home park due to the owner’s health and safety code violations.

Atop a flatbed truck, Barnes delivered a Mass that was translated from Spanish into Purépecha.

“We are not living the lives they are living, but we understand their struggles. My presence here tells the larger community that these people are important. I want to tell them the way they are is OK and they need not feel ashamed,” Barnes was quoted saying during the Easter service.

Meregildo Ortiz, 45, who works the fields, is a Purépecha leader in the community. He estimates that 90 percent of the Purépecha community is Roman Catholic. Many are also undocumented.

Ortiz said it’s important for Purépechas to preserve their language and customs. He’s also grateful for the Diocese who saw the “need for us to incorporate with the society at large.”