Pope Francis: The Catholic Church will endure because it is God’s project

Pope Francis: The Catholic Church will endure because it is God’s project 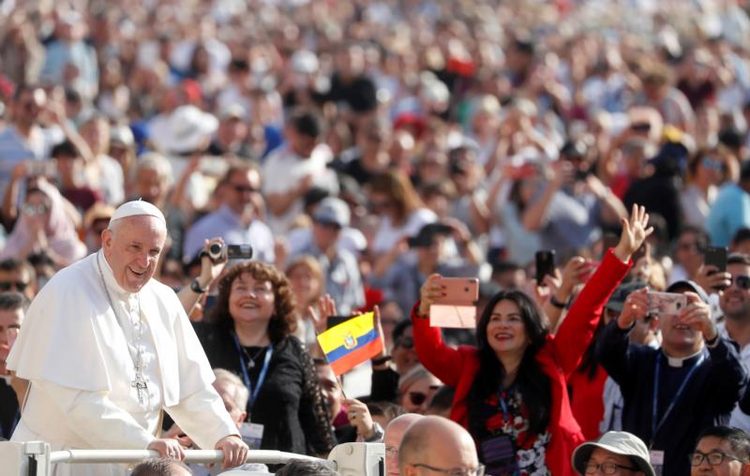 Pope Francis greets pilgrims as he arrives for his general audience in St. Peter's Square at the Vatican Sept. 18, 2019. The Catholic Church will endure, despite the frailty and sins of its members, because it is God's project, Pope Francis said during the audience. (CNS photo/Yara Nardi, Reuters)

VATICAN CITY (CNS) — The Catholic Church will endure, despite the frailty and sins of its members, because it is God's project, Pope Francis said.

Continuing his series of audience talks about the Acts of the Apostles and the early Christian community Sept. 18, Pope Francis looked at the story of Gamaliel, a Pharisee who tried to teach members of the Sanhedrin a key aspect of "discernment," which is not to rush to judgment, but rather to allow time for something to show itself as worthy or not.

As recounted in Acts 5, Gamaliel told the Sanhedrin not to execute the apostles for preaching Christ, "for if this endeavor or this activity is of human origin, it will destroy itself. But if it comes from God, you will not be able to destroy them; you may even find yourselves fighting against God."

"Every human project can initially drum up consensus, but then go down in flames," the pope said. But "everything that comes from on high and bears God's signature is destined to endure."

"Human projects always fail, they have a (limited) time, like we do," he said. "Think of the great empires. Think of the dictatorships of the past century; they thought they were so powerful and dominated the world, and then they all crumbled."

The most powerful governments and forces today also "will crumble if God is not with them because the strength human beings have on their own is not lasting," the pope said. "Only the strength of God endures."

The history of Christianity and of the Catholic Church, even "with so many sins and so many scandals, with so many ugly things," illustrates the same point, the pope said. "Why hasn't it crumbled? Because God is there. We are sinners and often, often, we give scandal," but "the Lord always saves. The strength is God with us."

The story also shows just how much courage the presence of the Holy Spirit brings, the pope said. When Jesus was arrested, the disciples "all ran away, they fled," but after the Resurrection, when he sent the Spirit upon them, they became courageous.

Pointing to the 21 Coptic Orthodox beheaded on a beach in Libya in 2015, Pope Francis said the same courage is still seen today in martyrs, who continued to repeat the name of Jesus even as their fate becomes clear. "They did not sell out their faith because the Holy Spirit was with them."

In the Acts of the Apostles, Gamaliel tells the Sanhedrin that if Jesus was an imposter, his followers eventually would "disappear," the pope said, but "if, on the other hand, they were following one who was sent by God, then it would be better not to fight them."

The "wait and see" attitude of Gamaliel is a key part of discernment, Pope Francis said.

"His are calm and farsighted words," part of a process that urges people to "judge a tree by its fruits" rather than acting hastily, the pope said.

Pope Francis asked people at the audience to join him in praying that the Holy Spirit would "act in us so that, both personally and as a community, we can acquire the habit of discernment" and learn to notice God acting in history and in our brothers and sisters.

wow! what hubris! that this corrupt, man made institution is "God's project"-- we have had plenty of time to judge this tree by its fruits and they are all sour. The sooner we have direct, unmediated relations with God, the better.

Congratulations Arthur you have managed to miss the point with exquisite precision.
You are the very member of the Sanhedrin whom Gamaliel was addressing.
This Church has endured far worse adversities and scandals than the current spate of issues.

Much as I disagree with most of what Pope Francis does and says, I wholly agree with his sentiment expressed in the first paragraph of this article.