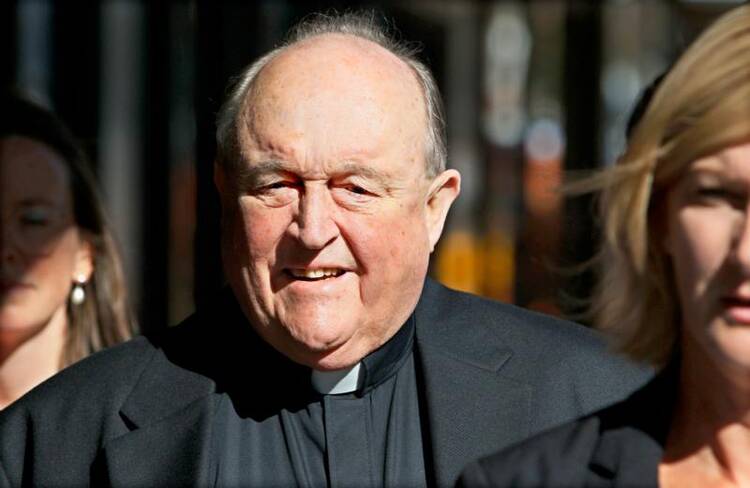 Archbishop Philip Wilson of Adelaide, Australia, arrives at the Newcastle Local Court April 9. He will face a two-week hearing over claims he concealed a colleague's sexual abuse of a 10-year-old boy in 1971. (CNS photo/Darren Pateman, EPA)

CANBERRA, Australia (AP) — The most senior Roman Catholic cleric to be convicted of covering up child sex abuse said Wednesday that he would appeal the verdict and resist public pressure to resign as archbishop of an Australian city.

Adelaide Archbishop Philip Wilson said he would only offer his resignation to Pope Francis if his appeal fails in the New South Wales state District Court.

"I am conscious of calls for me to resign and have taken them very seriously," Wilson said in a statement. "However, at this time, I am entitled to exercise my legal rights and to follow the due process of law. Since that process is not yet complete, I do not intend to resign at this time."

Wilson was sentenced in a Newcastle court on Tuesday to 12 months in detention for failing to report to police the repeated abuse of two altar boys by pedophile priest James Fletcher in the Hunter Valley region north of Sydney during the 1970s.

He issued the statement hours after Australian Prime Minister Malcolm Turnbull echoed Fletcher's victims by calling for Wilson to resign as archbishop.

"I am conscious of calls for me to resign and have taken them very seriously. However, at this time, I am entitled to exercise my legal rights and to follow the due process of law."

Turnbull, a former lawyer who was born a Presbyterian but converted to Catholicism — his wife's religion — in 2002, said he expected Wilson to resign when he was convicted in May.

"I'm surprised that he has not resigned. Clearly, given the outcome of the ... prosecution, he should resign," Turnbull told reporters.

The 67-year-old cleric stood down from his position as archbishop days after he was convicted.

He remains free on bail and will return to court next month to find out whether he will serve his sentence in prison or at his sister's house in home detention. He must serve a minimum of six months before becoming eligible for parole.

New South Wales Police Minister Troy Grant, who was a police detective in the 1990s when he uncovered widespread church child molesting in the Hunter Valley, condemned the Vatican's support of Wilson. "I'm ... disappointed that the response from the Roman Catholic Church in their future plans for this offender nowhere meets community standards or expectations," Grant said.

Catholic education in Ireland is in trouble. Can it survive the end of the ‘Baptism barrier’?
Carly-Anne Gannon

The Adelaide Archdiocese did not immediately respond to a request for clarification on whether Wilson would exhaust his appeal options before resigning. If the District Court upholds a Newcastle magistrate's verdict, Wilson would have another two tiers of appeal courts available to him in a process that could take years.

The federal government has initiated a redress scheme involving churches and other nongovernment organizations to pay billions of dollars in compensation to victims of child sex abuse in Australian institutions.

Wilson was once Australia's highest-ranking archbishop as president of the Australian Catholic Bishops Conference.

brazen, tough it out, keep using taxpayers money to hold appeal hearings, show no humility or grace, thumbs his nose at civil justice system--what arrogance! the same sin that got him to cover up the abuse in the first place ! What insensitivity-- c'mon Francis, are these the best executives you can appoint? Use your Chile precedent and ask all the Australian hierarchy to submit their resignations.

I can not believe that "He remains free on bail and will return to court next month to find out whether he will serve his sentence in prison or at his sister's house in home detention. He must serve a minimum of six months before becoming eligible for parole."
Ripple price - Ripple news
Bitcoin Cash price - Bitcoin Cash news