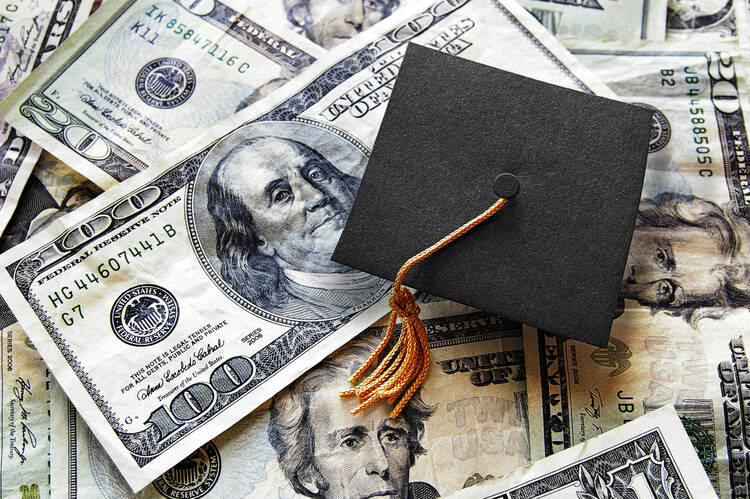 The highest paid president of a Catholic college in 2015 was Daniel J. Curran, the former president of the University of Dayton. His total compensation was $2,442,168, which included a bonus and deferred compensation worth $1,816,490. (Image via iStock)

Compensation packages in the high six figures are increasingly common for presidents of colleges and universities in the United States, and leaders at some of the nation’s Catholic schools find themselves near the top of the pay scale, according to a new set of data released this week.

According to the data published by The Chronicle of Higher Education, four presidents of Catholic colleges received compensation packages each worth more than one million dollars in 2015

According to a 2013 article published by The Chronicle, deferred compensation refers to a monthly amount of money invested on behalf of an employee that is available after a certain number of years, which serves as “a retention tool for presidents, who typically forfeit those earnings if they resign before a specified date.”

The second highest paid president of a Catholic college in the United States in 2015 was George E. Martin, who has led St. Edward’s University in Austin, Tex., since 1999. He received a compensation package worth $1,397,470, putting him at number 27 in terms of all U.S. college presidents. According to The Chronicle, Mr. Martin’s compensation included $926,699 in bonus and “other pay.” In previous years, Mr. Martin’s pay was just over $500,000.

A university spokeswoman told America that Mr. Martin’s 2015 compensation was “not reflective of his typical salary” and included “seven years of deferred compensation that he was required to take” at the end of his contract. St. Edward’s University is affiliated with the Congregation of the Holy Cross and enrolls about 4,600 undergraduate students; the total cost of tuition and fees is about $39,000 per year.

Mr. Curran, the first lay president of the Marianist university where annual tuition and fees run to $39,090, received the compensation after leading the school for 14 years.

Coming in at number three for Catholic colleges was the head of St. Leo University in Florida, Arthur F. Kirk Jr., who was paid $1,022,796 in 2015. That put him at number 55 in terms of overall compensation for a college president. Mr. Kirk announced his retirement in 2014, and The Chronicle data indicates his base pay for 2015 was $320,983, with an additional $694,464 in bonus and and other pay. According to a university spokesman, Mr. Kirk’s compensation package for 2015 included sabbatical pay and a final bonus following years of “modest compensation.” Annual tuition and fees are about $22,000 for the school’s roughly 2,300 undergraduates.

And at number four, the head of the University of Notre Dame, John Jenkins, C.S.C., was paid $1,006,249 in 2015, making him the 59th highest paid college president. A spokeswoman for the university told America that Father Jenkins transfers his salary to his religious order, the Congregation of the Holy Cross. This is a common practice for members of religious orders who take vows of poverty and lead schools. Annual tuition and fees at Notre Dame are $47,929.

Other presidents of Catholic colleges and universities who are in the top 100 highest paid presidents, which includes base pay, bonuses, retirement and deferred compensation are:

(The five highest paid college presidents in the United States in 2015 earned between $2.8 million and $4 million.)

When it comes to Jesuit schools, The Chronicle reports that many presidents receive a salary of $0 because they are Jesuits. Included in that group are Boston College, College of the Holy Cross and Santa Clara University. But that does not mean the schools have no overhead costs when it comes to their presidents.

“Most of our schools have moved to paying ‘market rate’ as determined by national salary studies. Whether the salary is reported as a salary or a donation, it still goes to the rector of the community, not to the Jesuit who is president,” Michael J. Sheeran, S.J., president of the Association of Jesuit Colleges and Universities, told America in an email.

Michael Galligan-Stierle, president of the Association of Catholic Colleges and Universities, told America that the transition from a nominal salary to a market rate compensation package given to religious communities helps ease the financial shock when a school moves to lay leadership—increasingly the trend in Catholic higher education. According to the A.C.C.U., just 29 percent of the nation’s 196 Catholic schools are headed by priests or members of religious communities, and the number is shrinking.

Still, he said the move to lay leadership “unequivocally” affects a school’s bottom line, as the money given to religious orders is often reinvested in the institution. Some examples include religious communities investing what would have been the president’s salary into Catholic studies programs, tuition assistance for first-generation college students. and even sports and spirituality programs.

When it comes to Jesuit schools, The Chronicle reports that many presidents receive a salary of $0 because they are Jesuits.

Three Jesuit universities hired lay presidents for the first time in their histories in 2014: Fred P. Pestello, who was paid $682,831 by St. Louis University; Linda Lemura, who was paid $425,269 by Le Moyne College in Syracuse, N.Y.; and Mr. Lovell, who appears in the list above, at Marquette.

Father Sheeran said that it is the religious order who loses money when a school transitions to lay leadership, as the salary equivalents are no longer transferred.

How Catholic business schools can do better than Harvard
William J. Byron

“When the president shifts to being a layperson, the real blow is taken by the Jesuit community since it no longer has the president’s salary coming to the rector to help cover the costs of the community members who are paid little or nothing—e.g., Jesuits who are adjunct faculty or in low-paid campus ministry positions,” he wrote.

As for the relatively high compensation packages college presidents receive, Mr. Galligan-Stierle said hiring a strong president is the “most important” variable when it comes to turning around struggling schools.

“Once you get that right person, you really don’t want to lose them,” he said. “And if you don’t have them, you try to find someone from another school who is doing great work.”

Correction: An earlier version of this story incorrectly said Gonzaga University is led by a Jesuit. It has been updated to fix the error.

Perhaps this explains why my granddaughter had to leave the University of Portland after her freshman year despite receiving a $16,000 scholarship. The tuition was going up another $5,000 with no increase in student aid. The present cost of a year's schooling at U.P. is just a few dollars short of $60.000.
This is reflected in Catholic university costs around the country. Most Jesuit universities cost well in excess of $60,000 a year.
Catholic universities were far more affordable until this generation. They have now become a gated community for the wealthy with a few needly students included to provide an appearance of Christianity.

Excellent article Michael. Shining the light on what should be an affordable Catholic education. St. Edwards in Austin was shocking to read!