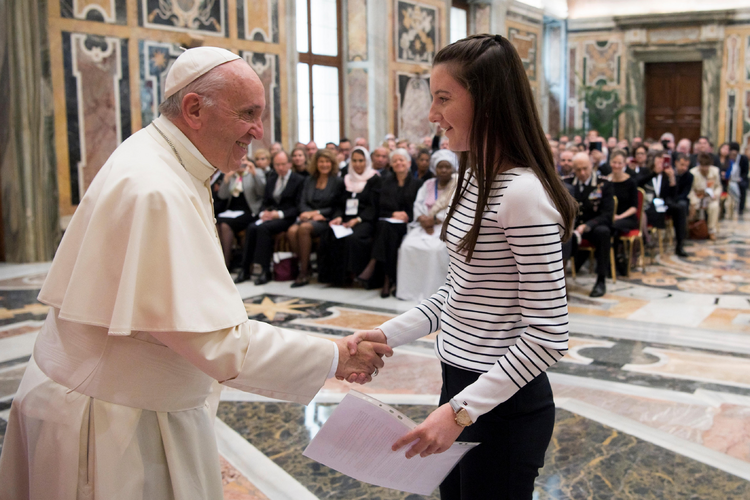 Pope Francis greets Muireann O'Carroll, 16, from Ireland during an audience with participants in an international congress on protecting children in a digital world, at the Vatican Oct. 6. (CNS photo/L'Osservatore Romano)

Pope Francis today committed the Catholic Church to work “effectively and with genuine passion,” in close association with lawmakers, police authorities, technological giants in the field of social communications and other actors in civil society, for “the effective protection of the dignity of minors in the digital world.”

He offered this commitment in the Vatican’s Clementine Hall when he addressed the 140 participants from the first world congress on “Child Dignity in the Digital World” that was held at the Jesuit-run Pontifical Gregorian University, Oct. 3 to 6.

He did so in response to its “Declaration of Rome,” a 13-point call to action, which was read to him at the audience by Muireann O’Carroll, a 16-year-old Irish girl, representing the “digital natives” generation.

The declaration appealed “to leaders of the world’s great religions to inform and mobilize members of every faith to join in a global movement to protect the world’s children.”

Pope Francis: “The church has come to acknowledge her own failures in providing for the protection of children.”

Francis assured them, “I firmly and enthusiastically support the commitments that you have undertaken!”

As he made that commitment, Pope Francis recalled that “the church has come to acknowledge her own failures in providing for the protection of children” and “extremely grave facts have come to light, for which we have to accept our responsibility before God, before the victims and before public opinion.”

Reading his prepared text in Italian, Pope Francis told his audience, “We have to keep our eyes open and not hide from an unpleasant truth that we would rather not see.” In recent years, he said, “we have realized sufficiently that concealing the reality of sexual abuse is a grave error and the source of many other evils. So, let us face reality, as you have done in these days.”

He told them that “as a result of these painful experiences and the skills gained in the process of conversion and purification, the church today feels especially bound to work strenuously and with foresight for the protection of minors and their dignity, not only within her own ranks but in society as a whole and throughout the world.”

“We have to keep our eyes open and not hide from an unpleasant truth that we would rather not see.”

But, he said, the church “does not attempt to do this alone” because “that is clearly not enough.” It does so “by offering her own effective and ready cooperation to all those individuals and groups in society that are committed to the same end.”

In this sense, he said, “the church adheres to the goal of putting an end to ‘the abuse, exploitation, trafficking and all forms of violence against and torture of children’ set by the United Nations in the 2030 Agenda for Sustainable Development” (Target 16.2).

Noting that “we are living in a new world that, when we were young, we could hardly have imagined,” Francis said this “digital world” is “the fruit of extraordinary achievements of science and technology” that in a few decades “has changed the way we live and communicate” and “even now, it is in some sense changing our very way of thinking and of being and profoundly influencing the perception of our possibilities and our identity.”

As we look “with real wonder and admiration at the new and impressive horizons opening up” and “the new and unforeseen problems it sets before us, and the negative consequences it entails,” the pope said we are confronted with “the great existential question facing humanity today”: Are we capable of guiding the processes we ourselves have set in motion and might be escaping our grasp? Are we doing enough to keep them in check?

He praised congress participants for focusing on “what is probably the most crucial challenge for the future of the human family: the protection of young people’s dignity, their healthy development, their joy and their hope.” He noted that already 800 million minors are navigating the internet, and that number is ever increasing, with 250 million minors from India set to join it in the next two years.

“We are living in a new world that, when we were young, we could hardly have imagined.”

Then going to the heart of the problem, he said: “We encounter extremely troubling things on the net, including the spread of ever more extreme pornography, since habitual use raises the threshold of stimulation; the increasing phenomenon of sexting between young men and women who use the social media; and the growth of online bullying, a true form of moral and physical attack on the dignity of other young people.”

In addition, he said one also finds on the internet, “sextortion; the solicitation of minors for sexual purposes” to say nothing of “the grave and appalling crimes of online trafficking in persons, prostitution and even the commissioning and live viewing of acts of rape and violence against minors in other parts of the world.”

He next moved to an issue that was much discussed at the congress from the beginning: the dark web. Francis pointed to the fact that “the net has its dark side where evil finds ever new, effective and pervasive ways to act and to expand.”

“The net has its dark side where evil finds ever new, effective and pervasive ways to act and to expand.”

In the past, he said, the spread of printed pornography “was a relatively small phenomenon compared to the proliferation of pornography on the net today.” He thanked participants for exposing this problem.

“What is distinctive about the net is precisely that it is worldwide,” he said. “It covers the planet, breaking down every barrier, becoming ever more pervasive, reaching everywhere and to every kind of user, including children, due to mobile devices that are becoming smaller and easier to use.”

He drew attention to the hard reality that “today no one in the world, or any single national authority, feels capable of monitoring and adequately controlling the extent and the growth of these phenomena, themselves interconnected and linked to other grave problems associated with the net, such as illicit trafficking, economic and financial crimes and international terrorism.”

He encouraged participants, saying: “We must not let ourselves be overcome by fear, which is always a poor counselor,” nor should we “let ourselves be paralyzed by the sense of powerlessness that overwhelms us before the difficulty of the task before us.”

Instead, “we are called to join forces, realizing that we need one another in order to seek and find the right means and approaches needed for effective responses.”

“We must not let ourselves be overcome by fear, which is always a poor counselor.”

Quoting from his encyclical, “Laudato Si’,” the pope told them, “We have the freedom needed to limit and direct technology; we can put it at the service of another type of progress, one which is healthier, more human, more social, more integral.”

As they mobilize for this purpose in accordance with their Declaration of Rome action plan, Francis advised them “to oppose firmly” three potentially mistaken approaches.

The first is “to underestimate the harm done to minors by these phenomena.” He said neurobiology, psychology and psychiatry “have brought to light the profound impact of violent and sexual images on the impressionable minds of children, the psychological problems that emerge as they grow older, the dependent behaviors, and situations and genuine enslavement that result from a steady diet of provocative or violent images.”

He added that “these problems will surely have a serious and lifelong effect on today’s children.”

But as we focus on minors, Francis said, we “should not underestimate” that adults too are affected by “the spread of ever more extreme pornography and other improper uses of the net not only causes disorders, dependencies.” All this causes “grave harm among adults” and “has a real impact on the way we view love and relations between the sexes.

“We would be seriously deluding ourselves were we to think that a society where an abnormal consumption of internet sex is rampant among adults could be capable of effectively protecting minors.”

The pope next highlighted “a second mistaken approach.” This would be “to think that automatic technical solutions, filters devised by ever more refined algorithms in order to identify and block the spread of abusive and harmful images, are sufficient to deal with these problems.” He recognized that these measures “are necessary,” adding, “Businesses that provide millions of people with social media and increasingly powerful, speedy and pervasive software should invest in this area a fair portion of their great profits.”

But, he said, “there is also an urgent need, as part of the process of technological growth itself, for all those involved to acknowledge and address the ethical concerns that this growth raises, in all its breadth and its various consequences.”

In this context, he pointed to “a third potentially mistaken approach,” which consists in “an ideological and mythical vision of the net as a realm of unlimited freedom.” While the net has opened a vast new forum for free expression and the exchange of ideas and information, which is beneficial, he said, “It has also offered new means for engaging in heinous illicit activities, and, in the area with which we are concerned, for the abuse of minors and offences against their dignity, for the corruption of their minds and violence against their bodies.

“This has nothing to do with the exercise of freedom,” he said. “It has to do with crimes that need to be fought with intelligence and determination, through a broader cooperation among governments and law enforcement agencies on the global level, even as the net itself is now global.”

The problem isn't technology. It is a human problem.
This Vatican conference is shifting the focus; self-serving.
The RCC added and abetted child sexual abuse by not intervening immediately.
More concerned about institutional image than the image of God in the most vulnerable.
Nice touch to have a 16 yr girl to read his position points.
But all P.R.
Francis still hasn't learned 3 years into his stewardship. When?
Until hierarchs are summarily and swiftly dismissed for complicity all of this Roman gathering is "smoke and mirrors!"
"And Jesus wept!"

UNBELIEVABLE HUBRIS! How about first really trying to protect children from something over which you have some control - your own SEXUALLY ABUSIVE PRIESTS!

This article also appeared in print, under the headline “Pope Francis commits church to protecting children in the ‘digital world’,” in the October 30, 2017, issue.