Who's afraid of transhumanism? (We all should be) 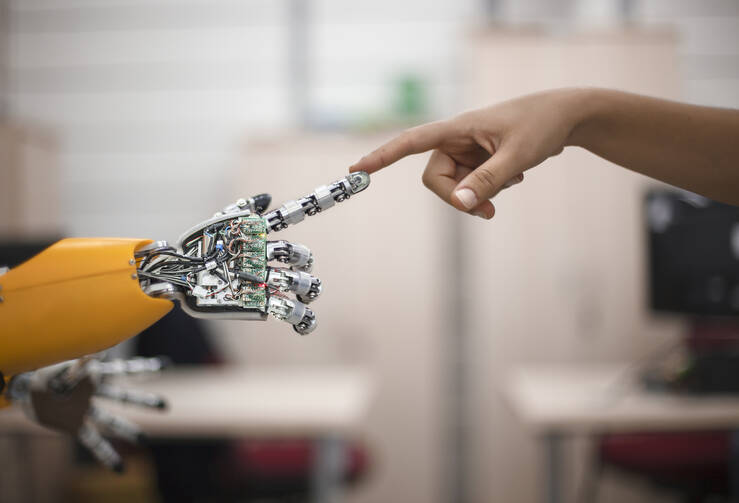 It is difficult to define, but it’s a growing movement. Transhumanism has its own central organization (Humanity+), its own demographic base (Silicon Valley), even its own political formation (the Longevity Party).

On one level the movement’s goals appear benign. One of its key documents, “Principles of Extropy,” sums up the basic values of transhumanism: “perpetual progress, self-transformation, practical optimism, intelligent technology, open society, self-direction, and rational thinking.” The local Rotary Club would not object.

But the fundamental ambition of transhumanism is more problematic. Its architects champion a use of technology to accelerate the evolution of humanity so radically that at the end of the process humanity as such would disappear. A superior posthuman being would emerge. According to Wikipedia, “Transhumanism is the intellectual and cultural movement that affirms the possibility and desirability of fundamentally improving the human condition through applied reason, especially by developing and making widely available knowledge to eliminate aging and to greatly enhance human intellectual, physical, and psychological capacities.” From its inception, the abolition of human death and aging has been one of the goals of transhumanism as it engineers a new being freed from the biological constraints of the current human condition.

From its inception, the abolition of human death and aging has been one of the goals of transhumanism.

Two of the movement’s philosophers, Max More and David Pearce, have developed eloquent apologies for the transhumanist creed. But they also indicate the movement’s more ominous philosophical themes.

The very concept of human nature disappears in much transhumanist literature. The human body is dismissed as something of secondary, accidental importance. Mr. More argues that “the self has to be instantiated in some physical medium but not necessarily one that is biologically human—or biological at all.” Once again in the history of philosophy, the body has become a mere container for the human mind. The body is perceived as an impediment to the mind’s development rather than humanity’s natural site for thought. Tellingly, in this new version of anthropological dualism, the soul has disappeared; it is the sovereign self, a liberated will yearning for omniscience and omnipotence, that remains. Unsurprisingly, Ayn Rand is one of the movement’s favorite novelists.

Little of Renaissance humanism remains in a movement that glorifies the posthuman being to come.

Not only is humanity freed from its biological finitude in the transhumanist dream; it no longer enjoys any unique status as a subject of rights. Max More claims that “creatures with similar levels of sapience, sentience, and personhood are accorded similar status no matter whether they are humans, animals, cyborgs, machine intelligences, or aliens.” The religious claim that human beings are made in God’s image and the political claim that humans deserve respect because of their transcendental status crumble. Little of Renaissance humanism remains in a movement that glorifies the posthuman being to come and considers current humanity a fleeting phenomenon with no particular, intrinsic dignity.

The moral philosophy of the transhumanist movement is broadly utilitarian. One cannot judge the morality of a particular act in isolation; its goodness depends on whether it contributes to the global pleasure of a future humanity and ultimately a posthumanity.

David Pearce has developed an influential version of this transhumanist utilitarianism in his book The Hedonistic Imperative. For Mr. Pearce, the greatest ethical task of humanity is to eliminate all suffering in the world. Just as medical science has eliminated physical suffering through anesthetics, we should now use technology to conquer all psychic suffering. Mr. Pearce endorses a vigorous use of genetic engineering and pharmacology to achieve this goal of an anguish-free humanity and posthumanity. He even supports the use of such technology to abolish pain in wild animals.

Mr. Pearce’s ethics represent the perfectionist side of the transhumanist project. He describes the mission to eliminate suffering as “paradise engineering” and “the naturalization of Heaven.” The state of a properly engineered posthumanity in the future is nothing less than paradisal: “Our descendants may live in a civilization of serenely motivated high achievers, animated by gradients of bliss.”

It is a strange utopia. Our current opioid epidemic is a cautionary tale against the dream of a sedated humanity. We are still reeling from the totalitarian dream where millions perished in the name of a radiant future that required some lethal cutting of ethical corners in the meantime. The enthusiastic transhumanist revival of eugenics is a cause for alarm. Is there any place for people with disabilities in this utopia? Why would we want to abolish aging and dying, essential constituents of the human drama, the fountainhead of our art and literature? Can there be love and creativity without anguish? Who will flourish and who will be eliminated in this construction of the posthuman? Does nature itself have no intrinsic worth? Finally, isn’t the transhumanist dream of liberating humanity from its biological and psychic creaturehood simply a high-tech surrender to an ancient temptation, “Ye shall be as gods?”

Who’s afraid of transhumanism? I am. We all should be.

This article makes 3 factual errors in the first paragraph. What kind of misleading journalism are you doing here? Your authors, whether they're professors or not, need to do more than look at unreliable, troll-dominated wikipedia for their ideas and facts. There's a ton of recent info and hard research on the internet about the burgeoning transhumanism movement. We welcome your criticism via your beliefs, but get your facts right for your readers and the public, especially when it's the first article of its kind in your reputable publication.
Sincerely, Zoltan Istvan (25 year veteran journalist / 2016 Transhumanist Party presidential candidate)

Is no editor going to take 2 minutes and correct the factual errors in the first paragraph? Or is this another #FakeNews site? 1) Humanity+ is not the central organization of transhumanism. It's a few hundred person group and is quite small. There are dozens of groups and organizations worldwide dedicated to transhumanism and there's no central body. 2) The demographic of transhumanism is international, with hubs in New York, London, Ft. Lauderdale, Tokyo, Moscow, San Francisco, Sydney, etc. 3) Longevity Party is a facebook page. There is a real political party that's very recognized in media as a 3rd party--it's run candidates and has state parties, etc: Transhumanist Party.
If you can't get basic facts rigth, you're peddling misinformation. Sigh. Zoltan Istvan

I don't agree that we should be afraid of transhumanism at all. Personal immortality is a human yearning -- and it could be argued, it is a biological imperative -- and if technology can help us achieve it, it should be welcomed. Even more, life on this planet has produced, through eons of evolution, biological conscience and a type of self-conscience that cannot be the ultimate stage of a universe that is trying, sometimes painfully, to understand itself.

Man cannot be end of this evolutionary process of self-understanding. It seems natural that we humans, using our reason, will give birth to new creatures with deeper knowledge and self-conscience until the whole universe is filled with a transcendent collective conscience, a conscience with complete and total memory, knowledge and will to unity. Let’s admit that our final collective purpose is to create the God that we have always dreamt about.

Human beings have a talent for creating solutions far worse than the problems they seek to solve. Transhumanism sounds like it belongs in this category. It sounds like an attempt to put humans in the place of God, to worship human ideas instead of God.

Having seen healthcare over decades, it progresses but does not solve the problems of living. When medicine's ability to extend life was quite limited, no one called for euthanasia. Now that medical interventions can extend life significantly, a movement toward euthanasia exists because people don't want to live hooked up to machines. I doubt that transhumanism will be able to solve the problem of human nature well enough to be anything more than the goofy fad it sounds like.

To portray transhumanism as the enemy of religion is disingenuous. Keith Ward, Anglican priest and former Regius Professor of Divinity at the University of Oxford, has written about it and makes the point that the soul can endure in many different kinds of bodies. It's a medieval scholastic Catholic viewpoint that wants to weld the soul to a particular body (Aquinas) and there's no real Christian reason why this should be so.

A disembodied soul is a just a platonic fantasy. Transhumans -- whether with biological, mechanical or even virtual bodies -- will exist in a universe made of matter, energy and information and nothing else.

A soul/mind joined permanently to a particular body is an Aristotelian fantasy. Transhumanism simply asserts that we are our minds/souls joined to some body, a body we can choose to heal or change, while still remaining ourselves.

Of course, the aristotelian soul is the body's "form." However, Plato's idea of the soul was something eternal that didn't need a body to exist. I am closer to the aristotelian idea of the soul as "form" and not the platonic soul as something that can exist without a material substratum. I agree with you Crystal in the sense that human mind cannot exist without some kind of material/energy/information (physical) foundation. Mind is an epiphenomenon of matter. Dualism is not an option.

Catholics like the Aristotle/Aquinas view - JPII wrote for this in Veritatis Splendor - but it has its problems. If your particular body is the only body possible for a complete you, if it is a result of your Form, then you are stuck with it for all time, even despite disability or illness. But if you are a soul/mind, your body can be interchangeable. Most people are actually dualists - thus all the science fiction in which people's true selves (minds) are placed in other bodies and yet they still remain themselves. Keith Ward has a lecture on this - "Superhumans? - Interfering with nature" ... https://www.gresham.ac.uk/lectures-and-events/superhumans-interfering-with-nature

True, most people are dualists and believe in a soul/mind separate from a particular body, but that doesn't mean they are right. Monists believe that mind cannot exist apart from a body, but it doesn't mean a particular unchanging body. In fact my body has undergone changes all through my life and so has my mind. Gradual changes of the body will allow for gradual changes of the mind without losing its identity. Remember Theseus' ship paradox.

Good point. This particular article, though, makes a lot of assertions that just seem hard to defend. I guess at the end of the day, the need to be able to tell if something or someone is the same as they were before is pretty important to us.