Was treatment denied to an imprisoned ailing Nobel Peace Prize winner in China? 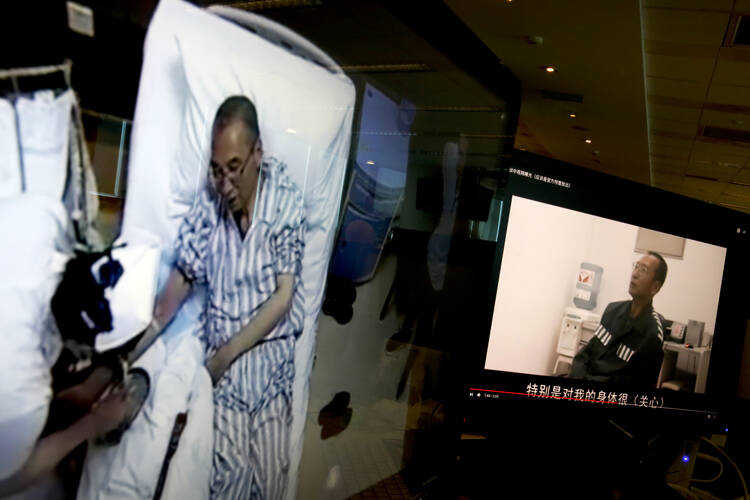 News this week that Chinese Nobel Peace Laureate Liu Xiaobo has been diagnosed with terminal liver cancer has been met with shock and disbelief as his friends accuse Chinese authorities of delaying treatment and handing down a de facto death sentence.

Although the authorities have granted him medical parole and claimed he was being treated by eight “renowned cancer experts,” his wife, Liu Xia, tearfully told a friend in a video call that has been posted online that her husband was beyond treatment by chemotherapy or operations.

“The news is so sudden. What people couldn’t even imagine is that this is not an 11-year sentence, but a death sentence,” said Beijing-based dissident Hu Jia, who was jailed in 2008 for three years on the same charge as Mr. Liu.

Mr. Liu, 61, was detained in December 2008 and sentenced on Christmas Day 2009 to 11 years in jail for “inciting subversion of state power.” A lecturer at Beijing Normal University, he was a key drafter of the Charter 08 manifesto, which called for sweeping political reform, democracy and respect for freedoms and rights. Mr. Liu had been a prominent figure during the student-led protests that swept Beijing and other Chinese cities in 1989.

“The news is so sudden. What people couldn’t even imagine is that this is not an 11-year sentence, but a death sentence.”

He was awarded the Nobel Peace Prize in 2010 because of what the committee described as “his long and nonviolent struggle for fundamental human rights in China.” Imprisoned at the time, his absence was marked at the prize ceremony by an empty chair.

Since he was jailed, the Chinese government has always maintained that Mr. Liu has been well treated. Late Wednesday, footage likely to have been released by the authorities surfaced on YouTube, which is blocked in China, showing Mr. Liu being treated, talking to his wife and telling medical staff he had a history of hepatitis B. Mr. Liu also said on camera that he "greatly appreciated" the care he was offered.

A statement on the website of the Justice Bureau in Shenyang, Liaoning Province, where Mr. Liu is held, said he has undergone annual health checks since he was jailed in 2009, and no irregularities were found until his latest examination on May 31. It said that Mr. Liu's liver cancer was diagnosed on June 7, and doctors found the cancer cells had already spread to other parts of his body.

But if Mr. Liu’s health situation had been carefully monitored, as suggested by the authorities, it only raises more questions about why his illness had developed into late-stage cancer by the time he was put on medical parole, his friends and rights groups say.

Now, it appears that Mr. Liu will only have months to live.

During the Cultural Revolution era (1966-1976), medical deprivation was routinely applied to people regarded as “enemies of the state”—from party leaders who Mao Zedong saw as rivals to political outcasts, such as those accused of engaging in “counterrevolutionary” activities or intellectuals who criticized the party.

After President Liu Shaoqi was arrested in 1967, he was often severely beaten in public denunciation sessions and was denied medication for his diabetes and pneumonia. He died in solitary confinement in 1969. Tao Zhu, a top party leader and a member of the elite Politburo Standing Committee, was diagnosed with cancer of the gallbladder during house arrest and was denied medical treatment until it was too advanced to be treated. He died in a hospital, also in 1969.

Victims brutally beaten in the Cultural Revolution—often from the bourgeois and intellectual class—were also routinely denied medical treatment when they were sent to hospitals because of their political background. Medical staff found that treating these political outcasts would get them in trouble for sympathizing with "class enemies."

If Mr. Liu’s health situation had been carefully monitored, as suggested by the authorities, it only raises more questions about why his illness had developed into late-stage cancer by the time he was put on medical parole.

Mr. Hu, 43, a former winner of the European Union’s Sakharov human rights prize, said he believed the late diagnosis of Mr. Liu’s terminal illness could reflect a combination of poor medical care in prison and a more calculated move to delay treatment for the prominent government critic.

He said from his own experience in jail, many “doctors” who treated prisoners were not properly qualified. When he complained about discomfort in his abdomen, he was told he had “stomach problems,” but they proved later to be symptoms of cholecystitis, an inflammation of the gallbladder, that was left untreated. To this day, Mr. Hu still suffers from cholecystitis as well as cirrhosis of the liver and hepatitis B, conditions that he said stemmed from his jail term and mental pressure from years of surveillance by police.

But he also believes the government has a more malicious agenda.

“Liu Xiaobo is the founder of the Charter 08, he has political ambition, he has social influence and respectability,” he said. “These potential political opponents—the authorities want to nip them in the bud.”

Yu Jie, a Christian dissident writer who fled to the United States in 2012 after being kidnapped by police, hooded, stripped naked and tortured, said he was certain that the authorities intended to hide the news of Mr. Liu’s cancer until it became too late because they wanted to be rid of a key political threat.

“If Liu Xiaobo were released in two years’ time, he would be a central force in the democratization of China,” said Mr. Yu, a close friend of Mr. Liu. “If he had freedom, he would have the moral authority of figures like Nelson Mandela or Aung San Suu Kyi.”

Perry Link, a sinologist at the University of California at Riverside, said an intentional delay in treating political prisoners fit a “standard pattern” of behavior of Chinese authorities even in more recent times.

He cited the examples of other activists who suffered a similar fate.

Activist Cao Shunli was detained by police in September 2013 for staging protests, on the charge of “picking quarrels and provoking trouble,” and was denied treatment for tuberculosis and liver disease throughout her six months in custody. She was only granted bail after she fell into a coma in February 2014 and died three weeks after arriving at the hospital. Her family said at the time her body appeared bruised and swollen, but they were barred from viewing Ms. Cao’s medical records.

Both Mr. Link and Mr. Yu likened the authorities’ treatment of Mr. Liu to the recent spectacle of North Korea’s handling of American Otto Warmbier. The U.S. student, sentenced in 2016 to 15 years hard labor for allegedly stealing a propaganda banner, was released on medical parole on June 12 after 18 months in captivity and restored to his family in a coma on June 13. He died just six days later.

The family of Bishop Cosmas Shi Enxiang, an underground bishop loyal to the Vatican, who had no news of him for 14 years while he was imprisoned, were informed of his death in February 2015. He was held without charge in a secret location, and his family were not told when exactly he died nor the cause of his death. Ordained in 1947, he suffered long periods of jail and in detention in labor camps and coal mines.

There has also been no news about another underground priest, Bishop James Su Zhimin of Baoding, Hebei Province. He has been detained without charge since October 1997 and is believed to be held in secret detention.

Even though Chinese authorities now say Liu Xiaobo is on medical parole, he has not regained freedom. His wife, who has been under house arrest since Mr. Liu was awarded the Nobel Prize, is currently allowed to see him in a hospital in the northeastern province of Liaoning, but the couple are closely guarded by police and barred from contacting anyone, his lawyer said.

Mr. Liu's chance of being allowed to travel to the West for treatment appears slim after Chinese foreign ministry spokesman Lu Kang this week warned foreign countries against “interfering in China’s internal affairs.” In his final statement to the court during his trial in December 2009, read at his Nobel Prize ceremony, Mr. Liu famously said: “I have no enemies.”

In a strident tone, state newspaper Global Times on Wednesday said “although he claimed he has no enemies... Charter 08, drafted by Liu, boldly takes aim at overthrowing China’s political system.”

“Xiaobo has said ‘I have no enemies,’ but they see him as an enemy,” said Mr. Hu. “It’s a consistent approach—to destroy you, your ability to confront them, your health, your will and your spirit.”