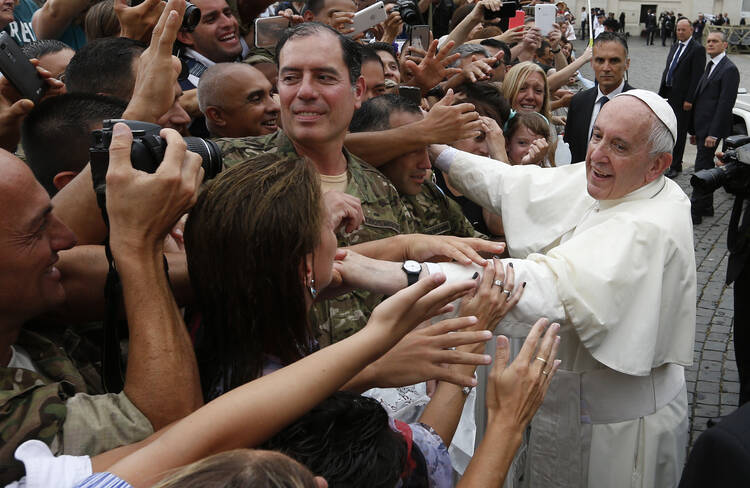 Pope Francis greets the crowd as he leaves his general audience in St. Peter's Square at the Vatican on June 28. (CNS photo/Paul Haring)

Labor unions that protect and defend the dignity of work and the rights of workers continue to have an essential role in society, especially in promoting inclusion, Pope Francis said.

"There is no good society without a good union, and there is no good union that isn't reborn every day in the peripheries, that doesn't transform the rejected stones of the economy into corner stones," the pope said on June 28 during an audience with Italian union leaders.

"There is no justice together if it isn't together with today's excluded ones," he told members of the Italian Confederation of Union Workers.

Unions, he said, risk losing their "prophetic nature" when they mimic the very institutions they are called to challenge, he said. "Unions over time have ended up resembling politicians too much, or rather political parties, their language, their style."

Labor unions must guard and protect workers, but also defend the rights of those "outside the walls," particularly those who are retired and the excluded who are "also excluded from rights and democracy."

Pope Francis denounced situations in which children are forced to work rather than being allowed to study, which is the "only good 'job' for children."

Turning to one of his frequently voiced concerns, the pope told the union leaders that a society that leaves young men and women without jobs is "foolish and shortsighted."

"When young people are outside the world of work, businesses lack energy, enthusiasm, innovation and the joy of living which are precious common goods that a make a better economic life and public happiness," he said.

The pope's speech kicked off the union's national conference on the theme: "For the person, for work."

Reflecting on the conference theme, the pope said that work without respect for the person "becomes something inhuman," while a person without work is incomplete.

People truly flourish when they have a job, "the most common form of cooperation that humanity has generated in its history," the pope said.

"Work is a form of civil love: It is not a romantic love nor always intentional but rather a true, authentic love, that makes us live and bring the world forward," he said.

Men and women, he continued, are not created solely for work but also must enjoy a "healthy culture of leisure," which "isn't laziness but a human need."

Pope Francis said he asks working parents if they play with their children and is often told that some mothers and fathers leave for work when their children are still sleeping or arrive home when they are already in bed.

"This is inhumane," he said. "For this reason, this other culture (of leisure) must go together with work; a person is not made just for work, because we don't always work and we shouldn't always work."

AMEN! Do any of them even read these stories, much less the comments?