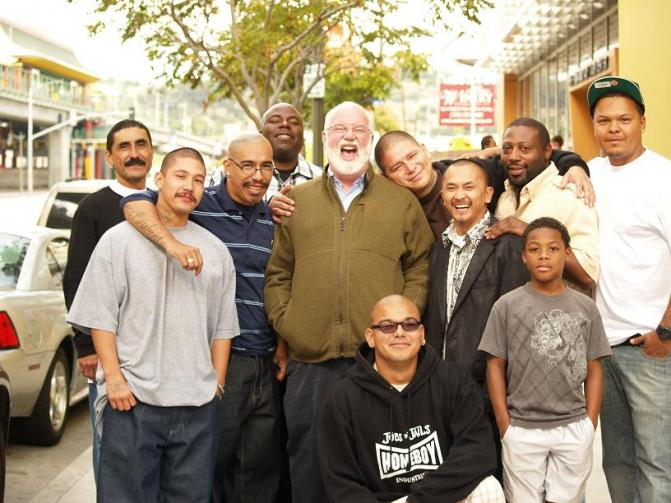 This episode of “America This Week” is co-hosted by Kerry Weber, with Senior Editor Kevin Clarke sitting in for Matt Malone, S.J. Zac Davis, an assistant editor for digital strategy at America, joins the conversation.

This week’s guest is Greg Boyle, S.J., who recently gave a commencement address alongside Vice President Mike Pence, when he received the University of Notre Dame’s 2017 Laetare Medal—the oldest and most prestigious honor given to American Catholics. Father Boyle is the founding director of Homeboy Industries, and has worked with gang members in Los Angeles for over 30 years. He recently wrote about his work for America in an article titled: “I thought I could ‘save’ gang members. I was wrong.”

“It’s connection and kinship that ultimately heals people,” Father Boyle said of his work at Homeboy Industries, which provides employment opportunities alongside therapy and spiritual direction for former gang members. “Training will come as a kind of side-order, but the main meal is tenderness and healing.”

Father Greg Boyle: I thought I could “save” gang members. I was wrong.
Greg Boyle, S.J.

Father Boyle noted that the process the company provides is more important than achieving a particular outcome. “Part of the problem is that we’re always so wrapped up in results and outcomes…. Results are someone else’s concerns—they’re not mine. Otherwise, if you want only good outcomes, then you’re going to only work with people who will give you good outcomes…. [At Homeboy Industries] we only bring in the violent and serious-offending gang member.”