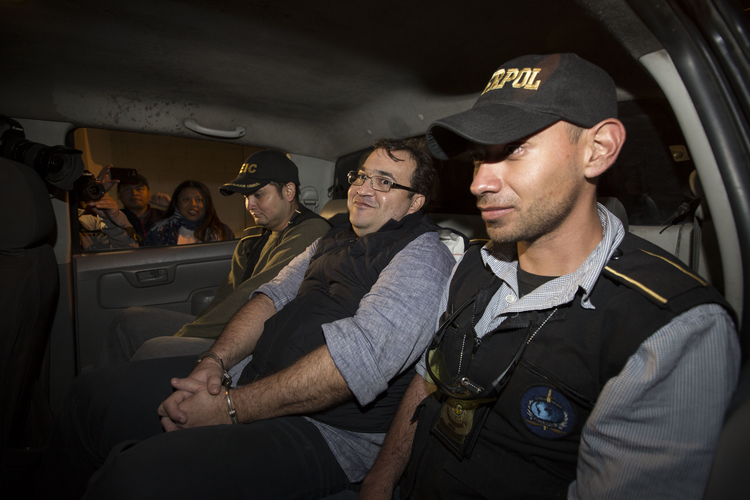 Mexico's former Veracruz state Gov. Javier Duarte, center, is escorted by agents of the local Interpol office inside a police car as they arrive at Guatemala City, early Sunday, April 16, 2017. Duarte, who is accused of running a ring that allegedly pilfered from state coffers, has been detained in Guatemala after six months as a fugitive and a high-profile symbol of government corruption. (AP Photo/Moises Castillo)

When 10-year old Ángel Jacinto Toh Nun took the stage on April 27 in the state congress of Quintana Roo, in southern Mexico, few expected the boy to deliver a powerful j’accuse against corruption.

“Nowadays politicians and officials do everything to conserve their privileges, without caring about the misery Mexicans are going through,” he said in Quintana Roo’s state capital of Chetumal during the annual “Children’s Parliament.”

“You, member of congress, what are you doing to put Roberto Borge behind bars?” he thundered. “Are you afraid or did they find out your price?”

Members of Quintana Roo’s congress applauded, but to many the moment was deeply embarrassing, especially after the video of the boy’s speech went viral on social media across the country.

“You, member of congress, what are you doing to put Roberto Borge behind bars?” he thundered. “Are you afraid or did they find out your price?”

Only eight months ago the man the 10-year-old referred to, Roberto Borge Angulo, was their governor. Few have seen him since he left office in September; he is accused of widespread corruption and graft. Federal authorities are currently considering whether or not to bring charges against the former governor, who led the state between 2011 and 2016.

Mr. Borge has been accused, among other things, of selling 25,000 acres of municipal land to friends and family members for a fraction of their worth. According to the investigative weekly Expansión, he even used thugs to drive people off beachfront property in Tulum after they had been seized under by court officers connected to his network . It was a lucrative affair; in February, federal authorities seized 25 pieces of real estate allegedly belonging to the former governor, worth more than $250 million.

Mr. Borge is only one of a number of Mexican former governors who have recently been accused of committing crimes when in office. On April 9, former Tamaulipas governor Tomás Yarrington was arrested in Italy on suspicion of ties to organized crime.

“Governors in Mexico are the most important channel of corruption and money laundering,” says Edgardo Buscaglia, a Columbia University scholar who has investigated corruption in Mexico for many years. “Mexico is a country with many Yarringtons and many Duartes.”

Mexicans are no stranger to widespread corruption, which costs the country a staggering $100 billion per year, according to last year’s National Corruption Forum. Governors are especially likely to become involved with graft; more than three dozen have been accused of corruption this century.

Mexico, at the turn of the century, ended 71 years of authoritarian rule by the Institutional Revolutionary Party (PRI), a political party which in those decades became synonymous with corruption. Under its leadership, however, governors were usually subservient to the federal government.

That changed when the PRI lost power in 2000; since then governors have become more powerful and gained more control over the funds allocated to states by the federal government. Oversight is limited, effectively giving governors the power to do as they please with high impunity; only five former governors are currently in jail serving a sentence or awaiting further investigations into their acts of state.

President Peña Nieto hailed the arrests as a “firm message” that corrupt public officials will have to “answer for their actions.”

Most of the arrests have been recent, however, and the pending extraditions of Mr. Yarrington and Mr. Duarte have been hailed by some as signs of the federal government’s increased willingness to address political corruption.

Indeed, on April 17, President Peña Nieto hailed the arrests as a “firm message” that corrupt public officials will have to “answer for their actions.” His administration is in the process of finalizing the creation of a so-called National Anti-Corruption System, which, at least on paper, should give the federal government ample tools to combat graft.

Observers, however, warn that the appearance of forceful action against delinquent public officials may be more a matter of public relations than an expression of true political will to tackle the issue. With the rise of social media, acts of corruption are harder to hide and officials caught in the act are now constantly the subject of national outrage.

“There certainly is a kind of nationwide mobilization against corruption, in all sectors of society,” says Sergio Aguayo, a political commentator. “The authorities are forced to act, they can no longer ignore public opinion and let corruption fester.”

But Mexican authorities have proven loath to significant change in handling corruption in the past. Case in point is the new National Anti-Corruption System; the federal Congress in Mexico City has failed to appoint an anti-corruption prosecutor three times in a row, and some critics question the system’s effectiveness after Congress limited its proposed authority to investigate graft.

“There is no true political will to change the rules of the system,” says Mr. Buscaglia. “The recent series of arrests have been more spurred by pressure from public opinion and because of the international attention to Yarrington and Duarte’s crimes. They had become ‘unpresentable’ figures.”

According to Mr. Buscaglia, the principal reason corrupt figures continue to be elected as governors or mayors is Mexico’s electoral system itself. Candidates are chosen based on party loyalty and their ability to finance campaigns, with very little real oversight as to how campaigns are paid for. The process, he says, facilitates dirty money flowing into campaign coffers and encourages savvy political operators who know how to use the system to run for office.

“The only way Mexico can effectively rid itself of the corruption issue is when it enacts a true electoral reform by opening up candidate lists to everyone, not just those who can bring in money from dark sources,” says Mr. Buscaglia. “But I don’t see the political will to do that right now.”