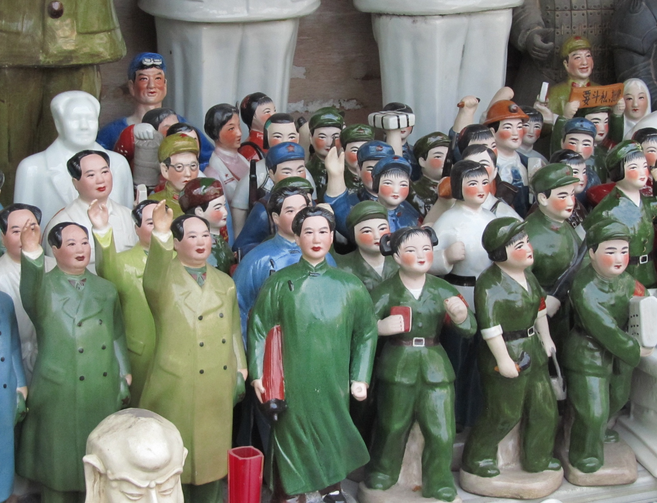 During the Cultural Revolution in the 1960s, when Siu Ying Lee’s kindergarten-age daughter saw a photo of her mother in a white lace wedding dress, instead of wishing she could look pretty like her, she pointed her finger and shouted: “Spy! Spy!”

Her mother, frightened at the prospect of the family getting into deep trouble, sternly told her not to tell anyone at school.

During the tumultuous Mao Zedong era, having any foreign ties—even having relatives living abroad—could easily lead to accusations of being a spy. Children were taught at school to be on the look-out for ubiquitous spies who might be lurking anywhere and to report them promptly. Many innocent people wrongly accused of being spies were brutally persecuted or killed as “class enemies” in the numerous political movements throughout the 1950s and ’60s, especially during the Cultural Revolution.

China has come a long way since then. But 40 years after the end of the Cultural Revolution, schoolchildren in China are once again being mobilized for an anti-espionage drive reminiscent of the Mao era.

Primary and secondary school children are the targets of this national security education campaign to “mobilize them as a huge counter-spy force,” the English-language state newspaper Global Times reported in mid-April.

“The concept of state security has to be firmly grasped, starting with young children,” Liu Wanghong, the deputy head of a state-backed think tank, Jiangsu Provincial Academy of Social Sciences, told the semi-official China News Service. “We need to incorporate national security education into our education system.”

Forty years after the end of the Cultural Revolution, schoolchildren in China are once again being mobilized for an anti-espionage drive reminiscent of the Mao era.

To mark “National Security Education Day” on April 15 as the front-runner in a national pilot scheme, the eastern province of Jiangsu launched a set of school textbooks that feature topics such as “National security is of paramount importance” and “We cannot let down our guard even during peacetime.”

According to state reports, the books use easy-to-read language and comic strips to explain to children the concept of national security and to teach them about threats posed by spies as well as “how to spot potential terror threats.” To make the message more appealing to children, the books feature games such as “find the spy.”

The anti-espionage drive is part of a broader national security campaign. China implemented its first Counter-Espionage Law in November 2014, and in July 2015, it passed a National Security Law which has wide-ranging powers to cope with what officials said was an increasingly “severe” national security situation.

Earlier in April, Beijing authorities offered cash rewards of up to 500,000 yuan (U.S. $72,400) to citizens who report foreign spies or activities that they believe are endangering state security or involve the theft of state secrets.

Cartoons and video clips have been posted on microblog accounts of China Central Television, the Communist Party Youth League and the Ministry of Public Security showing how ordinary people could identify spies and to encourage them to report suspicious people to the authorities. “Come on, be brave, go and report!” said a narrator to the beat of rap music on a video.

Last year, a 16-panel cartoon titled “Dangerous Love” posted in subway stations and streets warned young women against dating foreign men who could turn out to be spies.

The Chinese authorities’ fixation on national security stems from insecurity over the stability of its own regime, said political commentator and veteran journalist Ching Cheong. Mr. Ching, a Hong Konger, was jailed for three years in China on trumped-up espionage charges.

Since President Xi Jinping came to power in late 2012, he has repeatedly warned about “unprecedented security risks” faced by the country. He personally heads the National Security Commission, which he created in late 2013. He has emphasized that national security must be under “the absolute leadership of the Communist Party” and told officials to take preemptive steps to prevent “all kinds of risks” to national security.

In an internal speech made early in Mr. Xi’s presidency, he lamented the collapse of the Soviet Union, blaming it on a lapse in ideological control. Since then, Mr. Xi has overseen a tightening of ideological control and a clamp down on civil society, silencing liberal scholars and cracking down on human rights lawyers, dissidents, activists and N.G.O. workers.

“The leadership is very paranoid that China would follow in the Soviet Union’s footsteps,” said Mr. Ching. To prevent this, the authorities are attempting to raise people’s vigilance over national security using Mao-era tactics of “struggling against the class enemies,” he said.

Observers say the mobilization of ordinary people to report on spies is a throwback to the disastrous Mao era, in which there were constant rumors of neighbors, colleagues and classmates being secret spies of foreign powers.

At the start of Communist Party rule in 1949, posters were put up on the streets warning people against spies. Children were indoctrinated with the idea that “class enemies” such as landowners, capitalists, intellectuals and anyone seen to pose a threat to the ruling Communist regime had to be ruthlessly eliminated.

“These unsubstantiated rumors of the Mao era led to countless human rights violations and countless ruined lives,” said William Nee, China researcher at Amnesty International. “Since the Chinese government has not dealt with history honestly or objectively, it is no wonder that it seems to be willing to repeat the same mistakes.”

Mr. Nee said the real goal of the national security education campaign seemed to be creating “an atmosphere of paranoia” and to indoctrinate Chinese society, especially the young, to be inherently suspicious of foreigners, foreign ideas and foreign organizations.

“The Chinese leadership wants young people to imbibe their own worldview that sees the risk of ‘ideological penetration’ around every corner,” Mr. Nee said. “It seems that the government—at the very highest levels—is convinced that there is some sort of conspiracy and that China is at risk of ‘ideological penetration’ by ‘foreign forces’ who are changing the mentality of Chinese people by promoting things like democracy, human rights, religion.”

Observers say this kind of indoctrination could have lasting and damaging effects. Children who were indoctrinated with hostility towards “class enemies” in the early days of the Communist rule grew up to be red guards in the Cultural Revolution—many ruthlessly beat others, even their teachers, to death. Some remain unrepentant even to this day.

“The Cultural Revolution didn’t happen without a reason. It’s because people were instilled with a sense of suspicion and hostility from their childhood,” Mr. Ching said. “Now, the authorities appear to be reviving this Cultural Revolution practice again.”

This article also appeared in print, under the headline “I-Spy in China: a revival of Mao-era paranoia?,” in the May 29, 2017, issue.