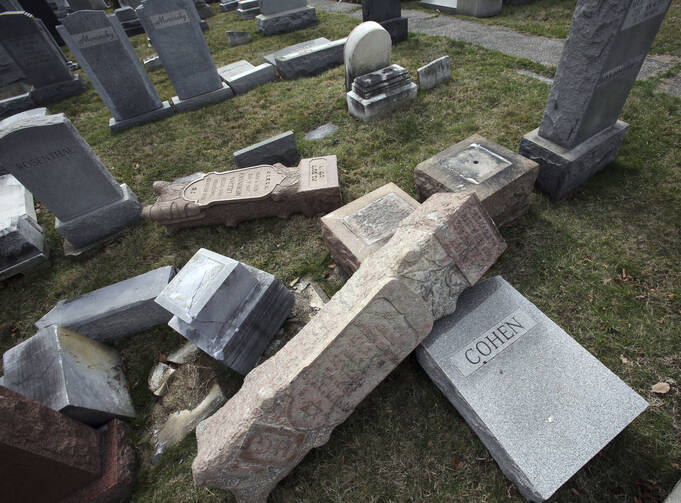 In this Monday, Feb. 27, 2017 file photo,toppled and damaged headstones rest on the ground at Mount Carmel Cemetery in Philadelphia. (AP Photo/Jacqueline Larma)

The Anti-Defamation League found an increase in cases of anti-Semitic intimidation and vandalism last year, evidence that anti-Jewish bias intensified during the election.

The Jewish civil rights group found 1,266 cases of anti-Semitic harassment last year, compared to 941 in 2015 and 912 in 2014. The increase continued into the first three months of this year, with reports of 541 incidents compared to 291 in the same period the year before, according to the ADL data released Monday.

The preliminary 2017 numbers include a wave of more than 150 bomb threats that started in January against Jewish community centers and day schools. Authorities arrested an Israeli Jewish hacker who they said was behind the harassment. The ADL insists those threats should still be considered anti-Semitic since Jews were the target. During the same period, a former journalist in St. Louis was also charged with threatening Jewish organizations as part of a bizarre campaign to intimidate his former girlfriend. But authorities believe the Israeli man is primarily responsible.

Even without those bomb threats, the number of anti-Jewish incidents this January, February and March in the report would be higher than the year before.

The FBI compiles annual hate-crime statistics, but the 2016 numbers aren't expected to be released until the end of this year. The ADL tally includes a much broader array of incidents, such as distribution of hateful materials, threats, slurs, intimidation and vandalism, along with physical assaults. The organization says its researchers evaluate reports from individuals, community leaders and law enforcement.

This latest compilation includes only a few cases of online harassment—incidents that led to "on the ground" intimidation—so that the organization can continue making year-to-year comparisons of ADL data going back to the group's first report in 1979, before the internet and social media were so broadly used, according to Oren Segal, director of the ADL Center on Extremism.

Anti-Semitic harassment in the U.S. has been at historic lows in recent years, according to the organization. In some prior years, the number of incidents surpassed 1,500 or 2,000, Segal said. But the recent uptick has fueled anxiety among American Jews during a period of emboldened expressions of white-supremacism and white-nationalism during the presidential election. Last week, a Jewish woman sued the founder of the neo-Nazi website Daily Stormer, accusing the publisher of orchestrating a barrage of anti-Semitic messages from anonymous internet trolls starting last December.

"I think the pace in which the incidents are happening, the speed at which the spike is occurring, I think the historic low is a thing of the past," Segal said.

The report linked 34 cases last year to the presidential race, including graffiti found in Denver last May that said "Kill the Jews, Vote Trump." ADL chief executive Jonathan Greenblatt was among the most vocal Jewish leaders pressing Donald Trump, as a candidate and president, to do more to combat anti-Semitism, including among his supporters. Critics, in the Jewish community and elsewhere, said partisanship was behind such pressure on Trump. In February, Trump opened his address to Congress with a strong condemnation of recent cases of vandalism at Jewish cemeteries.

Why fighting for religious liberty should not become a culture war.
The Editors

Is religious freedom really under threat?
The Editors

On college campuses last year, the number of reports of anti-Semitic incidents remained about the same compared to the previous year, the ADL said. Many of the schools have been roiled in recent years by protests over Israeli policies toward Palestinians. However, the organization saw an increase in the number of reports of harassment against Jewish school children from elementary age through high school.