Why evangelical churches are booming in Cuba

Why evangelical churches are booming in Cuba 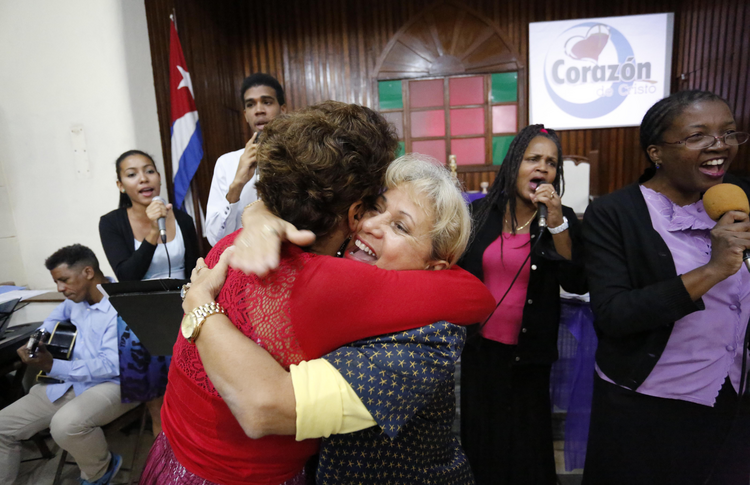 In this March 19, 2017 photo, people greet each other and sing as they attend Sunday worship at the William Carey Baptist Church in Havana, Cuba. (AP Photo/Desmond Boylan)

Fidel Castro's government sent the Rev. Juan Francisco Naranjo to two years of work camp in the 1960s for preaching the Gospel in a Cuba where atheism was law and the faithful were viewed as suspect. For years, Naranjo's church was almost abandoned, with just a handful of people daring to attend services.

Naranjo died in 2000 but on a recent Sunday, his William Carey Baptist Church was packed and noisy. Government doctors treated disabled children at a clinic inside. A Bible study group discussed Scripture in one corner of the building before a service attended by 200 of the faithful.

"In the 1960s, the few brothers and sisters who came here had to hide their Bibles in brown-paper covers," said Esther Zulueta, a 57-year-old doctor. "It's night and day."

Trump administration officials have repeatedly said religious freedom is one of the key demands they will make of Cuba when they finish reviewing former President Barack Obama's opening with the island. The administration has never been more specific, but outside groups have accused Cuba of systematically repressing the island's growing ranks of evangelicals and other Protestants with acts including the seizure of hundreds of churches across the island, followed by the demolition of many.

An Associated Press examination has found a more complicated picture. Pastors and worshippers say Cuba is in the middle of a boom in evangelical worship, with tens of thousands of Cubans worshipping unmolested across the island each week.

While the government now recognizes freedom of religion, it doesn't grant the right to build churches or other religious structures. It has demolished a handful of churches in recent years, but allowed their members to continue meeting in makeshift home sanctuaries. And like the Roman Catholic Church, the island's dominant denomination, evangelical churches have begun providing social services once monopolized by the Communist government.

"There's a revival of these churches, of the most diverse denominations in the country, and all of them are growing, not just in the number of members, but in their capacity to lead and act in society," said Presbyterian pastor Joel Ortega Dopica, president of Council of Churches of Cuba, an officially recognized association of 32 Protestant denominations. "There is religious freedom in Cuba."

"There's a revival of these churches, of the most diverse denominations in the country, and all of them are growing."

Clergy and academics say Cuba's 11 million people include some 40,000 Methodists, 100,000 Baptists and 120,000 members of the Assemblies of God, which had roughly 10,000 members in the early 1990s, when Cuba began easing restrictions on public expressions of religious faith. The church council estimates there are about 25,000 evangelical and other Protestant houses of worship across the country. About 60 percent of the population is baptized Catholic, with many also following Afro-Cuban syncretic traditions such as Santeria.

Naranjo was part of that opening. After the work camp, he returned to a church whose worshippers were barred from many state jobs. A thaw began in 1984 when visiting American civil rights activist Jesse Jackson stunned Cuba by taking Fidel Castro to a Protestant church service. In 1990, Naranjo was among a group of pastors who met with Castro to push for a greater freedom, and his own church worked on building ties between religious groups and the Communist Party.

The opening culminated in the 1998 visit of Pope John Paul II, which led to new liberties for both Catholic and Protestant worshippers.

The Cuban constitution now recognizes freedom of religion, but the law is silent on the issue of church construction. In a system where the government has long monopolized public life, virtually all activities are presumed illegal unless the law says otherwise. Authorities in some areas have prohibited new churches, even as they allow worship in religious buildings erected before Cuba's 1959 revolution.

The London-based advocacy group Christian Solidarity Worldwide issued a report alleging the Cuban government committed 2,380 violations of religious liberty in 2016, most linked to the declaration of 2,000 Assemblies of God churches as illegal, with 1,400 in process of confiscation. The group says it based that information on a source inside Cuba whom it would not name.

Juan Whitaker, the Assemblies of God's treasurer in Cuba, told The Associated Press this month that none of its churches had been declared illegal or were at risk of confiscation.

David Ellis, regional director for Latin America and Caribbean for world missions of the Missouri-based General Council of the Assemblies of God, told the AP, "We are in ongoing contact with the Cuba Assemblies of God leadership and they have not reported any churches being confiscated. Neither have they reported that churches have been threatened with confiscation."

Kiri Kankhwende, a spokeswoman for Christian Solidarity Worldwide, said its assessment hadn't changed and any statement to the contrary could be explained by official pressure on churches in Cuba.

Both men told the AP that churches they built in the yards of their homes were demolished by the government because they were constructed without permits. Both continue leading services inside their homes, where hundreds of worshippers gather each week.

"They tolerate me, but they don't accept me," said de Quesada. "I'm not shutting up or leaving. We have passion and no one will stop us."

Nunez said he was sentenced to a year of house arrest after neighbors complained about speakers he set up to boost the sound of services in his home. He blamed the situation on the vague status of new churches in Cuban law.

"If there were a law on church activities, none of this would happen and everything would be clear," he said.

Even so, churches are working on projects that once would have been forbidden to them, including efforts on AIDS prevention, sustainable agriculture, renewable energy, medicine distribution, training of farm workers and disaster relief.

"The Cuban authorities have understood the necessity of our presence and dialogue with the government, which still continues, even if we don't always agree," said the Rev. Dorilin Tito, a 38-year-old pastor at William Carey Baptist Church.