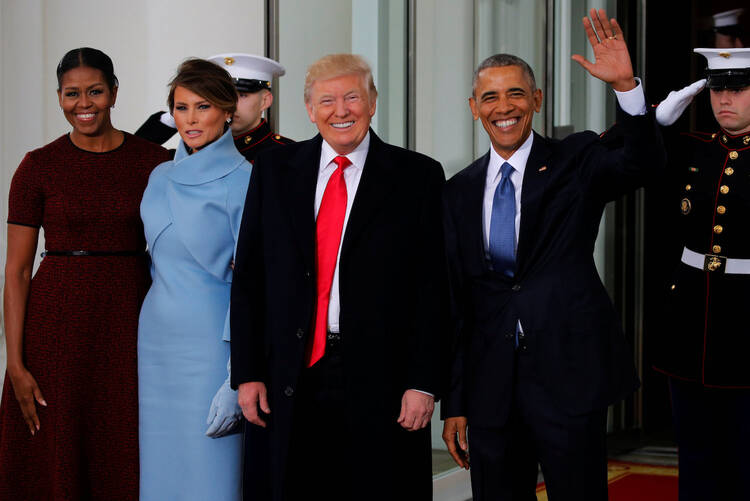 Moments before Donald J. Trump took the oath of office, becoming the 45th president of the United States, Cardinal Timothy M. Dolan of New York read a brief passage from the Book of Wisdom.

“Give us wisdom, for we are your servants, weak and short lived, lacking in comprehension of judgement and of laws,” the cardinal said, reciting Solomon’s Prayer from the Book of Wisdom. “Indeed, though one might be perfect among mortals, if wisdom, which comes from you, be lacking, we count for nothing.”

Cardinal Dolan was one of six members of the clergy scheduled to offer prayers on Friday morning.

On Thursday night, Cardinal Dolan posted a photo to his Twitter account showing him rehearsing for the prayer.

Rehearsing for tomorrow's scripture reading at the Trump inauguration. Pray for wisdom for all our elected officials! pic.twitter.com/7LHKNDGhNX

In a blog post published on Jan. 17, Cardinal Dolan wrote that he still held some reservations about the new administration but nonetheless remained hopeful about a new president.

“As with all previous ones, some welcome him, some are worried about him, most a little bit of both,” he wrote. “Whatever our reservations—and as with most other inauguration days, I have some too—it is classically a time of prayer, renewal, hope and unity. May it be so…!”

During his inaugural address, Mr. Trump alluded to the Book of Psalms in a section on the need to unite Americans.

“The Bible tells us how good and pleasant it is when God's people live together in unity,” he said. “We must speak our minds openly, debate our disagreement honestly but always pursue solidarity.”

But much of the speech was devoted to presenting a dark image of the United States, with the president saying that “the crime, and the gangs, and the drugs that have stolen too many lives and robbed our country of so much unrealized potential.”

Toward of the end of his address, Mr. Trump again appealed to God in a call for unity.

“And whether a child is born in the urban sprawl of Detroit or the windswept plains of Nebraska, they look up at the same night sky, they fill their heart with the same dreams and they are infused with the breath of life by the same Almighty Creator,” he said.

Cardinal Dolan’s appearance at Mr. Trump’s swearing in was something of a surprise, as had previously been critical of Mr. Trump, penning an op-ed in 2015 decrying what he dubbed as the candidate’s “new nativism.” But the pair have grown closer in recent months. Mr. Trump and his wife Melania were hosted by the cardinal for a private meeting at St. Patrick’s Cathedral before the election. Following Mr. Trump’s victory, the cardinal said he had reached out to the president-elect and his family, inviting them to visit him for prayer.

Not a stranger to the political spotlight, the cardinal prayed at both the Republican and Democratic National Conventions in 2012. He defended his appearance at Mr. Trump’s inauguration, the first for a Catholic bishop in about four decades, saying he would also have accepted an invitation had Hillary Clinton been elected.

Cardinal Dolan will not be the only Catholic prelate praying for the new administration this week.

On Saturday, Cardinal Donald Wuerl of Washington will take part in a prayer service at the National Cathedral, an Episcopal church in the nation’s capital. He will be one of more than two dozen faith leaders on hand to pray for the nation. Per the new president’s request, no sermon will be delivered.

Though a tradition, the prayer service at the cathedral has sparked some protest from religious leaders opposed to Mr. Trump, questioning the role of the cathedral in blessing the new administration.

For his part, Cardinal Wuerl posted to his blog on Friday morning an “Inauguration Day Prayer,” penned in 1791 by Bishop John Carroll, the first Catholic bishop in the United States.

“On this day more than two centuries later which sees the inauguration of a new president, I would like to adopt this prayer and raise with you our voices to God for his blessings on this nation and his holy Church,” Cardinal Wuerl wrote.

Mr. Trump began his inauguration day with a private prayer service at St. John’s Episcopal Church, located across from the White House. Invited to deliver a sermon Friday morning was the Rev. Robert Jeffress, a controversial preacher who has called Mormonism a cult and who has described Catholicism as a “cult-like, pagan religion.” He has also made inflammatory comments against Muslims and gays.

In the weeks leading up to the election, Mr. Trump wrote letters to several Catholic conservatives asking for their support. Unlike his opponent, Hillary Clinton, Mr. Trump also formed a Catholic advisory group, who championed the candidate’s promise to appoint pro-life judges to the Supreme Court. The efforts paid off, as a majority of Catholics cast votes for Mr. Trump.

Following Mr. Trump’s victory, many Catholic bishops said that they were cautiously optimistic, hoping to work with the new president on pro-life and religious liberty issues.

Though in recent weeks, some bishops have also urged Mr. Trump not to follow through on campaign promises to deport undocumented immigrants and said that repealing the Affordable Care Act without an alternative to insure the same number of Americans would be unacceptable.

@MikeOLoughlin
Show Comments (
2
)
Comments are automatically closed two weeks after an article's initial publication. See our comments policy for more.
Vincent Gaglione
6 years ago
I did not watch the inauguration, not wanting to jack up Trump’s television ratings. I did listen while riding in my car and doing some errands, to portions of the inauguration. I thought Dolan’s choice of a reading was quite on target. I found a couple of other invocations that I heard disconcerting. A couple of preachers’ invocations of Christ’s name were disconcerting to me. Inasmuch as there were no representatives of non-Western faiths, it could be misconstrued as deliberately insulting to unbelievers and non-Western faiths. Or am I being politically correct in a nation with no established religion per its Constitution to which the President and his VP swore allegiance? Also, I thought that the rabbi’s choice of words regarding Jerusalem a little bit political. Perhaps not, but of what I heard, it struck me that way. So I looked for texts of the prayers on Google. No luck. But one of the leading links was to Christianity Today, the evangelical website founded by Billy Graham. Its lead story for the day was that Cardinal Dolan’s choice of a reading was probably unfamiliar to Protestants because it came from a book that Protestants regard as Apocrypha. So I really don’t know if my reactions to the prayers was appropriate or not. In my opinion, with him as President we need God’s blessings and protection more than Trump does.
Bruce Snowden
6 years ago
As I listened to the clergy reading prayers at President Trump's Inauguration and "reading" is the right word, it seemed to me like the recitation of students repeating a homework assignment. The prayers were certainly proper but had a "let's get done quickly" feel, religious fervor and warmth missing. Well, right or wrong, that's the way I heard them. Hopefully God heard them the way they were meant to be heard, doing with them what they supposed namely, acknowledging the universal sovereignty of Almighty God.