I took a group of high school students to prison to meet people their age. Here's what I saw. 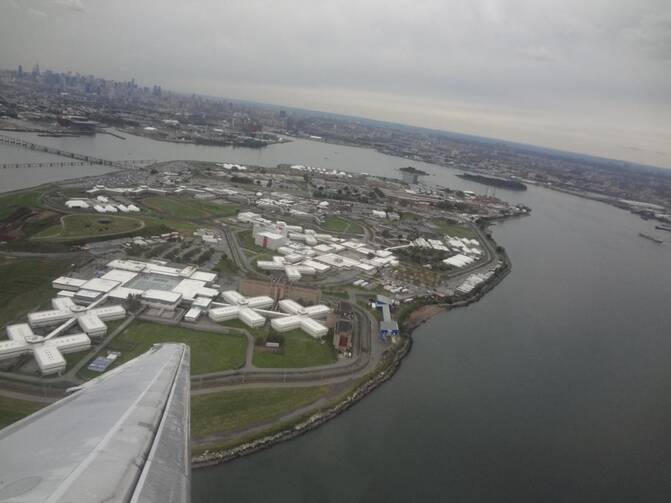 Rikers Island is not the first place you think to look for inspiration. It is a correctional facility, after all, New York City’s main jail. It sits just a couple hundred feet from a runway at LaGuardia Airport, though the bridge out there from Queens is a mile or so long. Rikers buildings are drab and its fences are high. It’s a pretty grim place.

I went out to Rikers three weeks ago with some high school students—that’s right, and that’s where the inspiration came from. The visit was a project of a young Jesuit, Zach Presutti. Zach is in the phase of formation when Jesuits take a break from formal schoolwork and serve in direct ministry (we call it regency). With a background in social work, he ministers in a number of prison settings.

Some months ago, Regis High School, a Jesuit school in New York, invited Zach to work with some students, and he brought a small number of them to meet some of the people locked up on Rikers, men just a few years older than themselves, for a different but very real experience of education.

A couple of weeks ago, in mid-afternoon, I went out to the offices of the Department of Corrections, not far from the bridge to Rikers. There I met up with Zach, and soon the Regis students arrived with one staff person and a volunteer. It was already dark as we loaded ourselves into a van that took us to the bridge, where we got ID tags. Over on the island, we entered a building that houses older teens and others up to about 23 years old. We passed through metal detectors, left phones and packages behind, exchanged our ID tags for new ones specific to this building and passed inside.

Part of the students’ mission was to bring gifts for those locked up. From fellow students they had collected 100 sets of underwear, T-shirts and socks; they also brought books of word games and puzzles. These are precious gifts for the detainees—they rarely get a gift of any kind. The students also brought cards printed with the Ignatian prayer for generosity, clearly marked “Regis and Rikers.”

We went down to a gym, where the students stacked their gifts on tables at one end. Soon some guards led in a group of about 10 detainees. This group was a basketball team, and a game soon started. The team was used to playing together, but the Regis students put up an honorable fight. After the game the students headed for the tables, and the detainees lined up. Guards had cautioned the students to hand out the gifts so no one could grab more than one set. No one did.

As the line filed by, the students introduced themselves, as did the detainees. The students also signed the prayer cards and gave one to each detainee, promising to pray for him. They also asked the detainee, if he wished, to sign a card and to pray for them. After this exchange, this group was led out and another group brought in. I noted that all the detainees were black or Hispanic—no white men, no Asians. The lines continued until the clock got close to 8, time to leave. The supply of gifts was nearly gone

I didn’t hand out gifts but just watched with growing awe and amazement. As detainees passed by, they often quietly greeted me too. I read gratitude in their faces and heard it in their voices. I saw care in the students, who were learning a lot. The guards were responsible, not hostile; their job is to prevent trouble, which they did very well.

One student seemed quite taken by the experience. I asked how he was feeling, and he replied smiling shyly, “It was scarier than I thought it’d be.”

The detainees returned to their cells, and we recovered our checked belongings at the security station. The van returned us to the parking lot, and we went our separate ways, back to familiar patterns, back to everyday comforts and chores we take for granted.

I was glad I had made this visit. The detainees were clearly thankful and moved, and they don’t often get asked for their prayers. The Regis students were obviously absorbing this new facet of their education and fitting it into their world of secure comfort and high hopes for the future. I kept seeing all these faces, the free and the bound, the caring and the grateful. Inspiration flows from many sources, in many directions. I found it abundant in the dark world of Rikers Island.

Show Comments (
1
)
Comments are automatically closed two weeks after an article's initial publication. See our comments policy for more.
Beth Cioffoletti
4 years 12 months ago
Thank you for this. I have a friend that I visit in prison. I've known him since he was 5 years old, he has been in prison since he was 18, and he is now 42 years old. Because of his circumstances he has developed an interior discipline (and hope) that I find rare. It is not a fair comparison to make, but I do compare him to a monk in a (very cloistered) monastery. I love the depth and introspection of our conversations. Yes, he is naive in many ways about the world, but he is also wise. He is not religious, calling himself a "humanist", but once a watched him watch his mother and brothers leave, and could see nothing but prayer on his face.