Deaths in the Family

Deaths in the Family 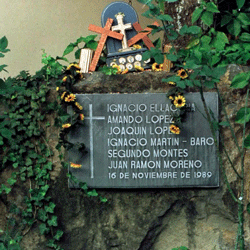 Kevin Burke, S.J., remembers the martyrs of El Salvador on the twentieth anniversary of their deaths.
Kevin F. Burke, S.J., the author of two books on Ignacio Ellacuria, discusses the legacy of the Spanish Jesuit and the other victims of the massacre at the Central American University in El Salvador on Nov. 16, 1989. A total of eight people were killed on that day, which proved to be a turning point in American policy toward El Salvador. Father Burke also reports on the work of Jesuit theologian Jon Sobrino, one of two members of the CAU Jesuit community who were not home that night and thus survived the attack.
Show Comments ()
Comments are automatically closed two weeks after an article's initial publication. See our comments policy for more.
Advertisement