Vatican Challenges Another Report on Francis: Latest interview not 'a record of his exact words.' 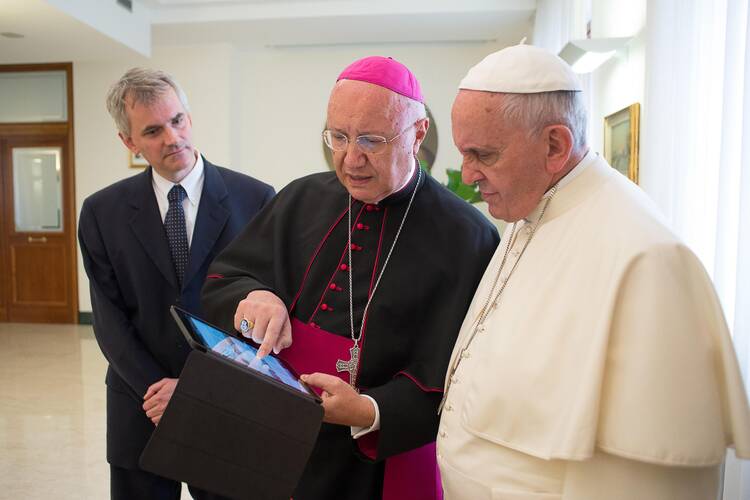 The Vatican said the latest published interview with Pope Francis, in which he says fighting sex abuse and the mafia will be priorities of his pontificate, should not be considered a record of his exact words.

According to the article, published on July 13 in the Rome daily La Repubblica, the pope also spoke about failings of the modern family, the nature of divine forgiveness and possible changes to the discipline of priestly celibacy.

Jesuit Father Federico Lombardi, Vatican spokesman, promptly released a statement confirming that the article "captures the spirit of the conversation" between Pope Francis and journalist Eugenio Scalfari, but cautioning that the "individual expressions that were used and the manner in which they have been reported cannot be attributed to the pope."

Suggesting that the "naive reader is being manipulated" by certain portions of the article, Father Lombardi expressed particular skepticism about two statements attributed to Pope Francis: a claim that some cardinals have been guilty of sexually abusing children, and a vow to "find solutions" to the "problem" of priestly celibacy.

According to Scalfari, the article was based on his third private conversation with the pope, an hourlong meeting at the pope's Vatican residence July 10.

Scalfari's first meeting with the pope, last September, was the basis for an Oct. 1 article that quoted Pope Francis saying he had considered turning down the papacy in the moments after his March 2013 election.

That article was republished in the Vatican newspaper but was later removed from the paper's website after doubts were raised over its accuracy. Father Lombardi explained it "should be considered faithful on the whole to the mind of the pope, but not necessarily in its particular words and the accuracy of its details."

Scalfari himself later told reporters that his quotations of the pope were based on memory, not notes or a tape recording.

The men's dialogue began when Scalfari, an avowed atheist, publicly addressed the pope in a pair of articles on religious and philosophical topics over the summer of 2013, and the pope replied in a letter that La Repubblica published last September.

"This statistic ought to reassure me, but I must say it doesn't reassure me at all," the pope reportedly said, three days after his first meeting with a group of sex abuse survivors. "The 2 percent who are pedophiles are priests and even bishops and cardinals. And others, even more numerous, know but keep quiet, punish but do not say why. I find this state of affairs unsustainable and it is my intention to address it with the severity it deserves."

Pope Francis noted that a large proportion of sex abuse cases take place in the home.

"This situation is frequent in families, practiced by parents, grandparents, uncles, friends of the family," the pope reportedly said. "Often other members of the family know but do not intervene, ensnared by self-interest or by other forms of corruption."

The pope reportedly said modern families increasingly fail in their duty to educate the young in the right values.

"Education as we understand it seems almost to have deserted the family," the pope reportedly said. "Everyone is occupied with his own tasks, often to assure the family a bearable way of life, sometimes to pursue one's own personal success, in other cases because of competing friendships and loves."

The pope, who declared in late June that members of the mafia have excommunicated themselves, also spoke about the church's relationship to organized crime.

"Some priests tend to pass over the phenomenon of the mafia," he reportedly told Scalfari. "Naturally they condemn specific crimes, honor the victims, help their families when they can, but the public and constant denunciation of the mafia is rare."

Noting a recent Marian procession in Calabria, when hundreds of people paused and bowed in front of the house of a presumed mafia boss, Pope Francis said, "all this is changing and will change. Our denunciation of the mafia will not be just once but constant."

Touching on the nature of divine mercy, one of his major themes, the pope stressed the importance of penance in the process of forgiveness.

"We do not judge, but the Lord knows and judges. His mercy is infinite but cannot be won by trickery," the pope reportedly said. "If the contrition is not authentic, mercy cannot exercise its redemptive role.